Having successfully resurrected Penny Arcade’s RPG series to much acclaim, Zeboyd Games returns to take things through to the end. Penny Arcade’s On the Rain-Slick Precipice of Darkness 4 is, as expected, more of an evolution than the initial 16-bit revolution when Zeboyd took the reins. It’s true that things mostly stick to Zeboyd Games’ usual solid formula, but there’s more than enough innovation and alteration to keep up interest and ensure that Zeboyd once again cements its place amongst the best of the indie RPG scene.

For those who have not played Rain-Slick 3, a brief intro sequence lines out the protagonists’ current situation. Anyone who wants actual details will be far better served by reading one of the readily-available synopses on the internet. The party has been split as of the end of the last game and now find themselves in different parts of Underhell. Tycho has disappeared and Gabe has to team up with Dr. Blood, while Moira is paired up with the skull Jim, who has now been given a gelatinous body and the ability to speak. The expected humour is ever-present, and keeps a light-hearted and entertaining mood despite the rather apocalyptic situation the universe is currently in. However, at times the humour feels over saturated, resulting in both individual jokes being less effective and the rare serious scenes losing their impact. That said, the story does a more than satisfactory job of linking together the various dungeons and keeping interest in what may happen next. 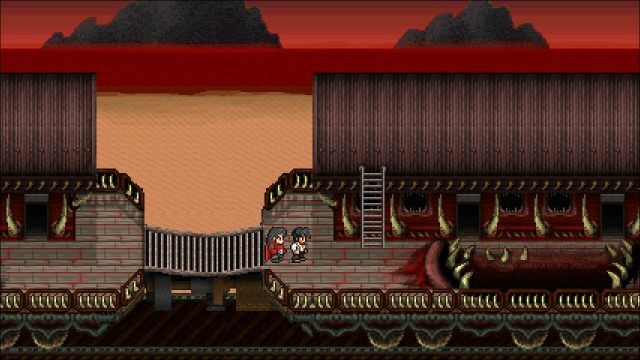 The absence of random battles in the previous game has carried over into Rain-Slick 4. Enemies all appear in predetermined locations on the maps, although more often than not placed so players cannot advance along that path until they are vanquished. It’s worth noting that this set-up can result in some boring trekking at the standard movement speed, but thankfully a run mode is included, which players will want to activate as soon as it is loaded to immediately remove the issue. Battles are also no longer fought directly by the protagonists due to the workings of Underhell, and instead involve various monsters of the area that the party recruits using their Monstorbs. Monster recruitment happens automatically in line with points in the story, or whenever the player finds a specific monster in one of the side corridors or dungeons. This means there’s little in the way of actual collecting, but it does mean players can customise their party a great deal.

The protagonists contribute slightly more than just sending out up to four monsters to face off against their foes. In addition to their regular skills, the party’s monsters receive an attribute bonus and a set of skills dependent on which character they are set to. Battles are similar to ATB, with a short period between the action being set and undertaken, during which the combatant can be susceptible to having their turn pushed back. Other battle features returning from Zeboyd Games’ previous offerings include enemies that grow in power the longer battles go on and an MP value that starts off at zero but increases each turn. Every now and then focus switches between the two pairs of protagonists, and hence a different set of monsters, which helps freshen things up. This is offset by the annoyance that this usually kicks in right when players have memorised their currently available skills and have a nice rhythm going. The result forces players into starting the process over again with a completely different set.

Despite this occasional frustration there’s little not to enjoy from the battle system. Battles are fast-paced and generally require players to formulate a good strategy, which will have to be adjusted and make use of the various battle features depending on the opponents. A large number of battles also have special restrictions or effects that help to keep things fresh, although some won’t actually have any impact on how the player approaches it or be over before the condition actually does anything. With its general pace, enjoyability, and depth the battle system defintely ranks amongst the better turn-based systems around and is clearly one of the areas of greatest strength for Zeboyd. 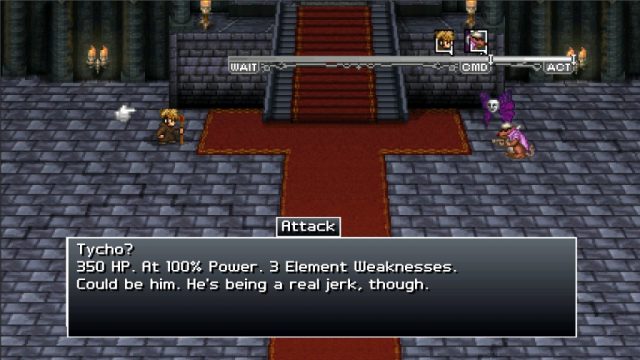 So chances are good it is him then?

Difficulty is adjustable between the four levels at any time in the game, and thanks to the setting of Underhell there is no game over should players be defeated. The normal difficulty is mostly well balanced, providing decent challenges at certain points, although a couple of chapters do seem quite trivial compared to others. The game has plenty of exploration through dungeons, with a few optional caves to explore, and players should expect to achieve completion in around seven or eight hours. There isn’t much to do after completion outside of playing again at a higher difficulty, but the single playthrough provides more than enough enjoyment to satisfy the game’s modest cost.

The music in the game is great, taking on a considerably more metal and guitar-based direction over the chip-tuned based effort from the last game. HyperDuck Soundworks has certainly provided some exciting and thoroughly engaging tunes, such as the vocal theme tune for Team Rocket-esque recurring villains Fish Force and a stellar battle theme. Visually the game is also right up there with the best of the sixteen-bit era and another notch up for Zeboyd, although obviously still with all the limitations of that graphical generation. Dungeons are distinct and pleasing to explore, inhabited by well-designed and nicely varied enemies. Character portraits that appear during conversations seem to be the main area that has lacked improvement, looking a bit odd in some cases, most notably the generic ones of nameless NPCs, and generally not adding anything to the sprites or conversations.

Rain-Slick 4 feels like a good place to end the series, and anything further would only cause things to stagnate. The game never feels like time wasted, which is a rarer statement these days. Those who have enjoyed Zeboyd’s previous efforts will not be disappointed here and will find a game that offers great appeal to RPGamers of all generations. Zeboyd Games continues to show improved mastery of turn-based battle systems, and it will be interesting to see which direction its next game takes things.