Looking Behind the Veil

Death and the afterlife are a huge part of several cultures and religions, with some even believing that a soul is reincarnated into a new body after the old one dies. This concept is no stranger to fiction, being used in many stories over the course of human history. Tokyo RPG Factory has decided to take its own stab at it with their latest game, Oninaki. The Square Enix offshoot developer has developed a reputation for making games that rely purely on the nostalgia factor, reusing mechanics and presentation techniques from 16-bit classics like Chrono Trigger. They’re clearly aware of this as their newest release is a conscious attempt at shaking off these assumptions with a game that tries to explore incredibly heavy themes with real-time action RPG combat. This results in some neat ideas that never really come together like they should.

In the world of Oninaki, death is normalized due to the confirmed existence of the afterlife and reincarnation. A group called the Veil Watch consider it their duty to guide the Lost — souls of the dead who are unable to move on — to be reincarnated as well as enforce the laws of the world. Among the Veil Watch is Kagachi, a Watcher who has grown to be cold and stoic due to the death of his parents as a young child. While on duty, he encounters an amnesiac ghost girl named Linne, saving her from a mysterious entity known as the Night Devil, who is said to have committed mass murder sometime in the past. He makes a promise to Linne to take down the Night Devil which sends him on a path that will lead him to discover his true connections to both Linne and the Night Devil. 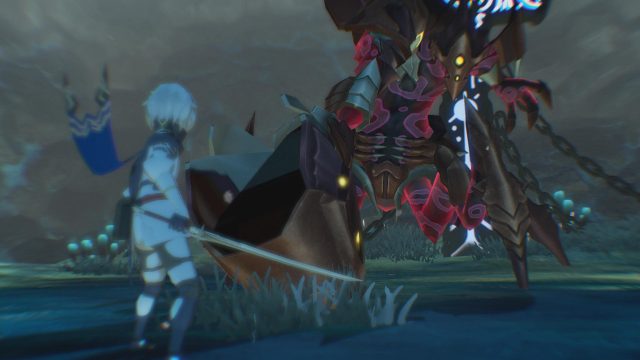 Kagachi prefers to do the work alone if he can help it.

Oninaki makes it clear early on that it intends to touch on heavy themes such as death, murder, and suicide, and the game has a consistently somber tone throughout. While this is all well and good, the way the game ends up telling its story ends up being one of its biggest flaws. It is overly reliant on using assisted suicide and murder as plot points in the first few hours without easing the player into the setting. The narrative is hobbled by this lack of gracefulness in how it handles the subject matter, attempting to execute emotional beats that never feel earned.

The main narrative revolving around the mystery of Linne and the Night Devil takes way too long to properly get started, with the first several hours of the game consisting of sequences of events that try to set up the world yet don’t add to the story in any meaningful way. It doesn’t help that the game’s attempts to develop the relationship between Kagachi and Linne fall flat, with both characters feeling one-note and lacking in nuance or depth. While there is a cast of supporting characters throughout the narrative, they are ultimately underdeveloped and for the most part don’t contribute anything of importance to the story. This underdevelopment is magnified by the game’s tendency to kill off characters without first giving players any reason to be emotionally invested in them. When the main thread does pick back up, the twist and turns of the story fall flat without the needed investment, complete with a limp ending that leaves a bad aftertaste.

On the surface, Oninaki is a typical hack-n-slash action RPG affair where the player cuts their way through waves of enemies. The element that stands out are the Daemons, which are Lost souls that act as weapons that provide different abilities and methods of fighting. While only one Daemon is available for use at the start, several more are obtained further into the game. As these Daemons are used in combat, they earn special skill stones that can be used to upgrade their skill trees as well as helping them regain their lost memories, which are portrayed in scenes of monologued narration.This provides incentive to use them all in combat, or at least that seems to be what the developers intended as various design issues end up hindering the potential of these systems. 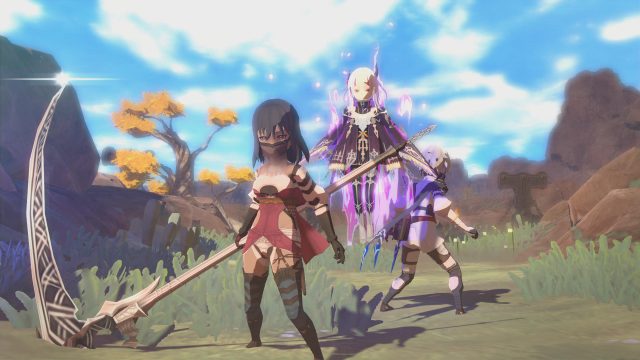 This game really could have used more women fighting with giant scythes.

Huge stretches of the game have the player going through long, winding areas with bland dungeon design. The lack of variety in enemy types and the general damage sponge-y nature of a lot of the monsters make combat feel monotonous after a while, especially when using a newly obtained Daemon that only has one special attack. Most Daemons only become useful after gaining enough of their respective skill stones to learn other special attacks. This discourages experimentation as it becomes more convenient to stick to a few Daemons, especially since only four can be equipped at a time. While a few of the Daemons allow for Kagachi to dodge roll, others only allow him to jump, making it all too easy for enemies to get cheap attacks on the player, which is exacerbated by the inability to cancel out of attack animations. Boss fights, while often a decent challenge, mostly amount to doing scratch damage until the player is able to pull off a Manifestation with one of their Daemons that increases the damage dealt to the opponents.

In addition to combat, Kagachi will switch between the living realm and Beyond the Veil, where he’ll occasionally encounter ghosts that he must help get back on track to rejoin the cycle of reincarnation. These side quests involve either going to a certain place where they want to go or the ghost turning into a Fallen which needs to be defeated in order to fulfill the request. Unfortunately, these quests don’t have any variety to them and the only reason for doing them is to get Null Stones, which can be used to upgrade any of the Daemons, as opposed to the Daemon-specific skill stones.

While in the Veil, players will need to take heed of blind spots — sections of an area covered in complete darkness — as Kagachi is unable to see or fight in them and getting attacked in them results in instant death. In order to get rid of these blind spots, monsters known as Sight Stealers need to be defeated in the living realm. Getting rid of the blind spots is advantageous for the player as going Beyond the Veil will help them net healing items and other niceties from treasure chests that are only in the Veil. Switching between these two realms is yet another neat idea that the game doesn’t do anything interesting with and ends up being more busywork to make the game longer as the player will need to scour each area in both realms if they intend to find everything the game has to offer. 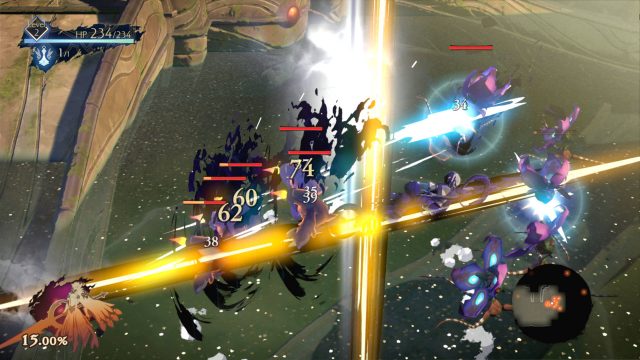 Expect to fight the same enemy types over and over again.

From the liberal reuse of character and enemy models to bland dungeon design that really starts to be egregious by the end, Oninaki looks like a game made on a tight budget. It’s not a bad-looking game by any means, with solid color design throughout, especially in some of the environments and particularly within the Veil, which manages to give off an otherworldly quality that really distinguishes itself from the more staid living realm. The sound design gets the job done and not much else, with a lot of the game being played with a lack of sound other than Kagachi’s footsteps and ambient noises. Music does kick in during certain occasions in combat and story sequences, with tracks that are generally decently composed if a bit forgettable.

While Oninaki had its fair share of ideas that could have potentially made it a gem, it is ultimately undone by weak storytelling that doesn’t do its heavy subject matter justice and combat that is enjoyable at times yet held back by design flaws that hinder the experience. It never quite executes its best ideas in a wholly satisfactory way, resulting in a game that I tried my best to open my heart to, but the game refused to open its own.