Nobody Saves the World Review

One of my fondest memories is playing co-op games with friends. There is nothing more exciting than eating snacks, working through quests, and goofing around. DrinkBox Studios’ latest release, Nobody Saves the World is a stellar title for action RPG fans who love twisted humour and crazy combat. Despite the name, it can be entirely played in co-op and will definitely bring fans of the genre back to the good old days.

Players are introduced to a strange world that has been infected with a fungus-like calamity. The kingdom’s inhabitants have been searching for their archmage, Nostamagus, who has disappeared. Desperate for a hero, the kingdom turns to Nobody, a dead-eyed husk who stole Nostramagus’ magic wand and has been granted the ability to shapeshift. In order to stop the calamity, Nobody must use his newfound powers to find the missing gem shards, which can restore the world and repel the fungal infection.

The story in Nobody Saves the World is fairly straightforward but utterly delightful in its approach. Players are introduced to all kinds of quirky oddball NPCs, each a barrel full of awkward laughs. There is a strong balance between funny and incredibly dark themes in Nobody Saves the World. Randy the Rad, Nostamagus’ loyal apprentice, steals the show with his narcissistic tendencies and his desire to play hero. Even the sidequests have entertaining dialogue, from a slug who wishes to resurrect his wife from the dead to a group of aliens who have no idea how they landed in this world and wish to be reunited. The amount of fun present in this twisted world shines through in every character interaction and quest chain. 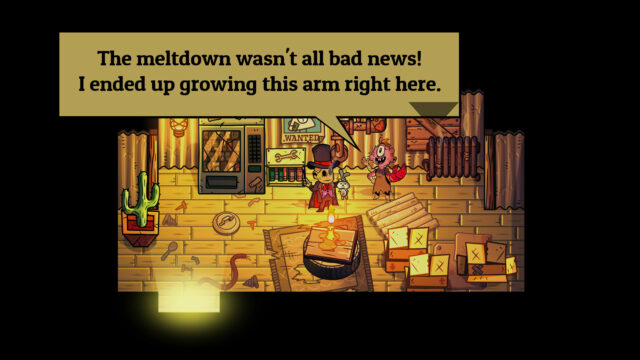 So many delightful weirdos.

The core gameplay of Nobody Saves the World revolves around shapeshifting. Nobody must use different forms to perform specific tasks to build up his experience. Each form is specifically geared towards one of the four types of damage: sharp, blunt, light, and dark. As Nobody gains new guises and levels them, he becomes able to equip the skills previously learned skills from other forms. For example, players could take on the form of a bodybuilder who has blunt skills but can also have the ability to create zombies that deal dark damage. Mixing and matching different forms with different skills allows for a ton of flexibility, and the game encourages player experimentation when dungeon-diving. With a huge variety of forms such as horse, turtle, necromancer, and even a cute little slug, there is something for every kind of player. In fact, the slug is the best form in this reviewer’s humble opinion, as it can move around players like a bullet hell shooter.

Nobody works his way through a variety of dungeons, each with unique trappings that force players to be on their toes. With challenging conditions like all hits dealing 9999 points of damage or Nobody being restricted to one specific form, players need to carefully plan their loadouts and change strategy at a moment’s notice if something isn’t working. That being said, not every form feels balanced. For example, using the horse form allows for a back kick. Holding the ZR button will lock the direction Nobody is pointing in place, but it means only being able to attack enemies from one direction, which can feel stiff. Despite this drawback in some of the forms, the majority are very inventive, from the magician who can create familiars that will attack enemies until their death, to a ghost who can damage enemies by being near them. Throughout the game, on top of being able to hack and slash through enemies, there is so much mayhem present and loads of boons to collect. It’s delightful to watch the insanity of everything on screen unfold.

Although there’s a lot of uniqueness in the dungeon challenges, the core gameplay can definitely get repetitive. Going to a new dungeon, slaughtering enemies, and hitting the final room is a constant pattern in the game. While there’s an interesting variety in the challenges within dungeons, many can simply be brute forced. Even with this repetitiveness, the game never truly outstays its welcome, as there is an addictive quality to leveling up each of the forms to gain new ones. On top of having tons of sidequests to complete, the game also allows players to buy quests that can be constantly redone for more experience points, which speeds up the leveling process. 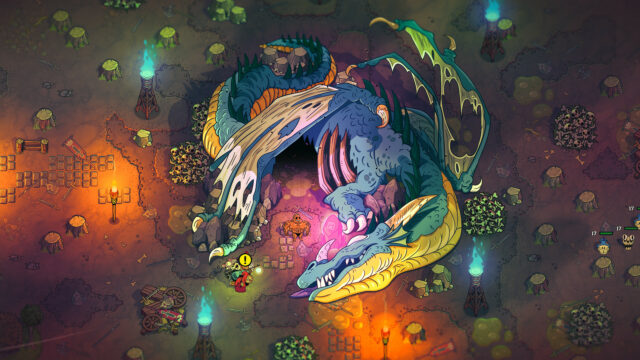 Into the belly of a dragon.

Nobody Saves the World is also a difficult game to play on one’s own. It’s completely doable, but why play alone when there’s awesome co-op? This is the kind of RPG that is worth having a friend experience. Having two players at once means having multiple forms while exploring locations, and can even create more options for how to work through dungeons, adding even more delightful chaos. Playing the game with a friend truly feels fantastic, as working through dungeons and being able to have two different forms on the go while assassinating mobs of enemies is a joyful experience. The console versions offer local co-op for those who have a buddy to play with. Playing through the game with a friend offers tons of laughs, and it’s great to have someone to problem-solve different locations with. While the game is fun to play alone, having a second player amplifies the experience to a whole new level.

In terms of graphics, Nobody Saves the World bursts with colour and personality. While all dungeons have similar design setups, there is such distinctiveness in how the overworld looks, as the character designs have a weird and twisted look to them that gives off equal parts charming and sinister vibes. Each area has its own personality that is well-reflected while exploring every inch of the game. The soundtrack definitely gets the player pumped for dungeon-diving and exploring, and there is a decent variety in musical styles, from harder rock to more somber and slower beats. The best track by far though is Randy the Rad’s theme, as it has the right level of obnoxiousness that completely fits every time Nobody is forced to interact with him.

Despite its repetitive nature, there is so much to love about Nobody Saves the World. Not only is it a great experience to share with a friend, but it’s a memorable one overall. Drinkbox Studios has crafted such a fun and challenging experience that definitely made me a glutton for punishment. There is so much creativity throughout the game from its overall aesthetic to its unique take on action RPG combat. Nobody Saves the World deserves so much praise for everything it accomplishes and is a must-play for anyone who loves crazy apocalyptic settings filled with questionable but loveable weirdos.