Ni no Kuni: Wrath of the White Witch Switch Review

Having never owned a PlayStation 3, I never had a chance to enjoy Ni no Kuni: Wrath of the White Witch when it was first released in 2013. Earlier this year, I got a chance to play through about half of the original Japanese Ni no Kuni: Dominion of the Dark Djinn for Nintendo DS and after throughly enjoying it, I eagerly awaited the release of the White Witch version on the Nintendo Switch. While the game has some issues that affect gameplay, overall it was a worthwhile experience.

Developed by Level-5 and joined in production by Studio Ghibli, the opening to Ni no Kuni plays out with an emotional gut punch. Oliver, the young child protagonist, and his friend sneak out of their 1950s small-town homes at night to drive a race car they’ve been building. An accident occurs and both Oliver and the car end up in the river. Having woken up sensing something wrong, Oliver’s mother races outside and jumps into the river, saving her son. Sadly, this is all her weak heart can take, and she passes away after the rescue. A few days later while crying in his bedroom, Oliver’s tears transform a small doll his mother had given him into the fairy, Mr. Drippy. Mr. Drippy believes Oliver is the answer to his alternate world’s problems and encourages Oliver to travel between worlds with him with the promise that a way to save his mother still exists. 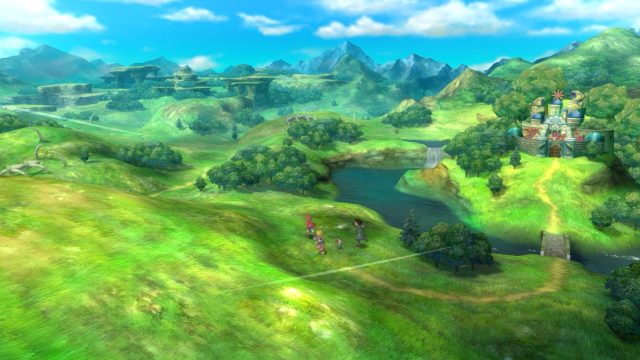 It is said a picture is worth a thousand words; in this case all of those words are “beautiful.”

At this point, Wrath of the White Witch becomes somewhat a prototypical JRPG. Young Oliver travels to a new world, filled with alternate-reality versions of many people he knows back home in Motorville. He learns to cast spells and befriend monsters called familiars while building a small team of similar humans that travel the world solving problems in town after town as the inevitable battle with an oppresive dark djinn, Shadar, looms large. While the game checks nearly every JRPG trope box from “young child saves the world” to “walk around until you get a ship and then sail until you can fly” to “the expected final boss isn’t really the final boss,” it does it in such a beautiful way that shows that these story beats became timeless tropes for a reason. Each one is handled very well and there are plenty of uplifting, heartwarming, and heartbreaking moments throughout that keep the adventure memorable.

Also very well done are a couple of other RPG staples: alchemy and sidequests. The alchemy system allows for creation of equipment, healing supplies, and familiar evolution items from materials dropped by enemies or found at shiny spots while traversing the world map. Recipes are given by NPCs, found during story beats, or can be discovered while exploring the voluminous Wizard’s Companion book located in the game menu. This beautiful book was a physical collector’s edition item six years ago, but is easily navigated in-game and contains not just useful and necessary information, but a wealth of other just fun content to spend time reading. Sidequests are also abundantly present, and extremely worth players’ time to complete. While most are simple fetch quests or involve Oliver repairing pieces of NPC’s broken hearts, rewards stretch beyond mere items and money to new spells and important merit stamps. These stamps can be traded in for permanent in-game bonuses such as increased EXP, better stat growth, or increased chance of familiar recruitment. These bonuses are extremely important due to Ni no Kuni’s greatest weakness: the battle system. 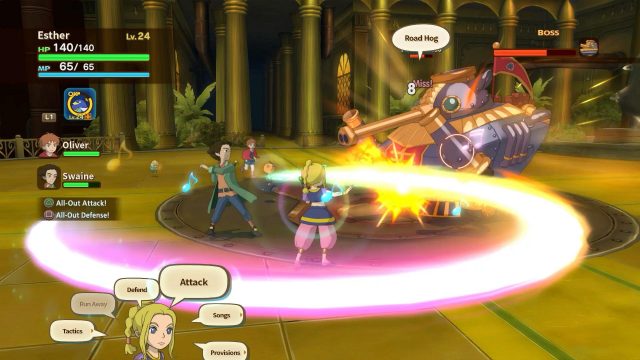 Much goes on in the battle system, most of it without players input or control.

Simply put, Ni no Kuni: Wrath of the White Witch’s battle system doesn’t know what it wants to be. At first glance it looks to be action-based as neither enemies nor allies ever stop moving around the battle field attacking, defending, or casting spells. But it ends up as a menu-based, semi-turn-based affair as the player must select their actions from menus and submenus while at the same time running around the battle field trying to dodge attacks and pick up restorative items dropped by enemies. An active time battle system with dodge mechanics may be an appropriate descriptor, but so too is an unbalanced mix of far too many mechanics. Each playable human character can have up to three familiars with them in a battle, and can freely switch between the ones battling or choose to fight as themselves. Players can only control one at a time, leaving the others to the whims of a painful AI. Spells and skills have high MP costs and all familiars assigned to a character share the same MP pool. It’s not uncommon for MP pools to become depleted after a random encounter or two, or within the first minute of a long boss fight, leaving normal physical attacks as by far the most common tactic. A deep menu-based system degrades to simply running from attacks and pressing X to attack far too often.

Collecting familiars, another gameplay aspect related to the combat system, is frustrating as well. Like in most monster-collecting games, the desire in players to catch them all likely will be triggered by the wide variety of available familiars wandering the world. The game unfortunately squashes this urge quite early on since there’s no mechanic other than randomness that decides if a familiar will join the party. At the end of each battle there’s a chance one will join, but there are no actions or items that affect the chance outside of passive increases earned from leveling up or through sidequests. Conveniently included for free in the Switch version of Wrath of the White Witch are former PlayStation 3 DLC golden versions of some good familiars, so if players don’t wish to spend countless hours waiting to recruit statistically superior familiars, they have access to great ones early on.

Two areas where there are few, if any, caveats are the art and sound direction of Wrath of the White Witch. Whether in handheld mode or docked and connected to a 50″ screen, the game is visually stunning. Clouds lazily cross the sky, spreading shadows over the varied terrain on the overworld. Cities come alive with detailed NPCs going about their lives, and so many seemingly minor graphical details make each house, street, boat, and doorway seem unique. Cutscenes look straight out of a Studio Ghibli movie, and battle animations and familiars are colorful and pleasing to the eye even after the hundredth time they appear. Matching the visuals is an impressive soundtrack composed by Joe Hisaishi and performed by the Tokyo Philharmonic Orchestra. Everything pleasing seen on the screen is brought to an even deeper level of artistic appreciation by a soundtrack worthy of the view. The town themes fit well to the various locations, making wandering around and enjoying each note a treat. The score also hits emotional notes during certain cutscenes, adding a depth of emotion to the story. 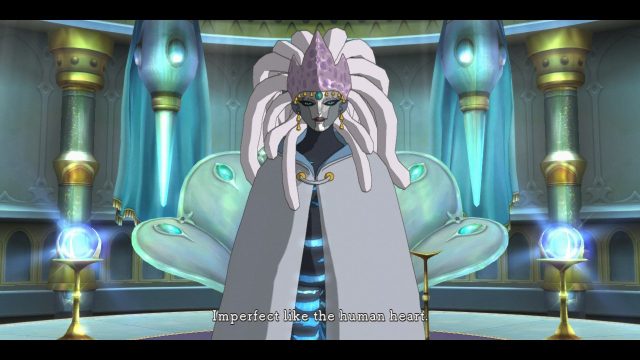 The White Witch in her visually impressive and beautifully lit chamber.

A couple of final aspects worthy of praise are the casino in Ni no Kuni: Wrath of the White Witch and the overall localization. Accessed somewhat towards the middle of the game, the casino has the typical chance-based games like slot machines and blackjack, but also contains two entertaining unique mini-games. The first is an enjoyably difficult, skill-based balancing act similar to a gameplay mechanic found earlier in the Temple of Trials where you must simultaneously move two party members along a path using the two analog sticks on the joy-cons. The second is a surprisingly deep card card game called Platoon where players can strategically build five piles of cards to outscore their opponents a best three out of five. Casino rewards include the best healing items in the game as well as high-powered familiars, making a worthwhile diversion from the main story. The localization for Wrath of the White Witch was completed by Schloc Ltd, the same company who recently worked on Dragon Quest XI. Their pun game is on point throughout the game and small nuances such as noticeable speech mannerisms that change by city or region help to bring the large, diverse world of Ni no Kuni to life. Their most impressive work is on the Wizard’s Companion tome, which is accessed through the menu and has thirteen beautiful fairy tales included in its sixth chapter that despite only being tangentially related to the game are worthy of a read on their own.

Ni no Kuni: Wrath of the White Witch is a good JRPG held back by the poor design decisions made for the battle system. Straddling the line between the turn-based system of its DS forefather Ni no Kuni: Dominion of the Dark Djinn and the full action-based system of its PS4 sequel Ni no Kuni II: Revenant Kingdom does the game no favors, but for those that can successfully battle the familiars more than the system, there’s a great deal of fun to have with this game. With a solid story and an amazing, beautiful world to explore, the White Witch on Switch is a port that many JRPG fans will enjoy, especially those like me who are getting to play this for the first time. 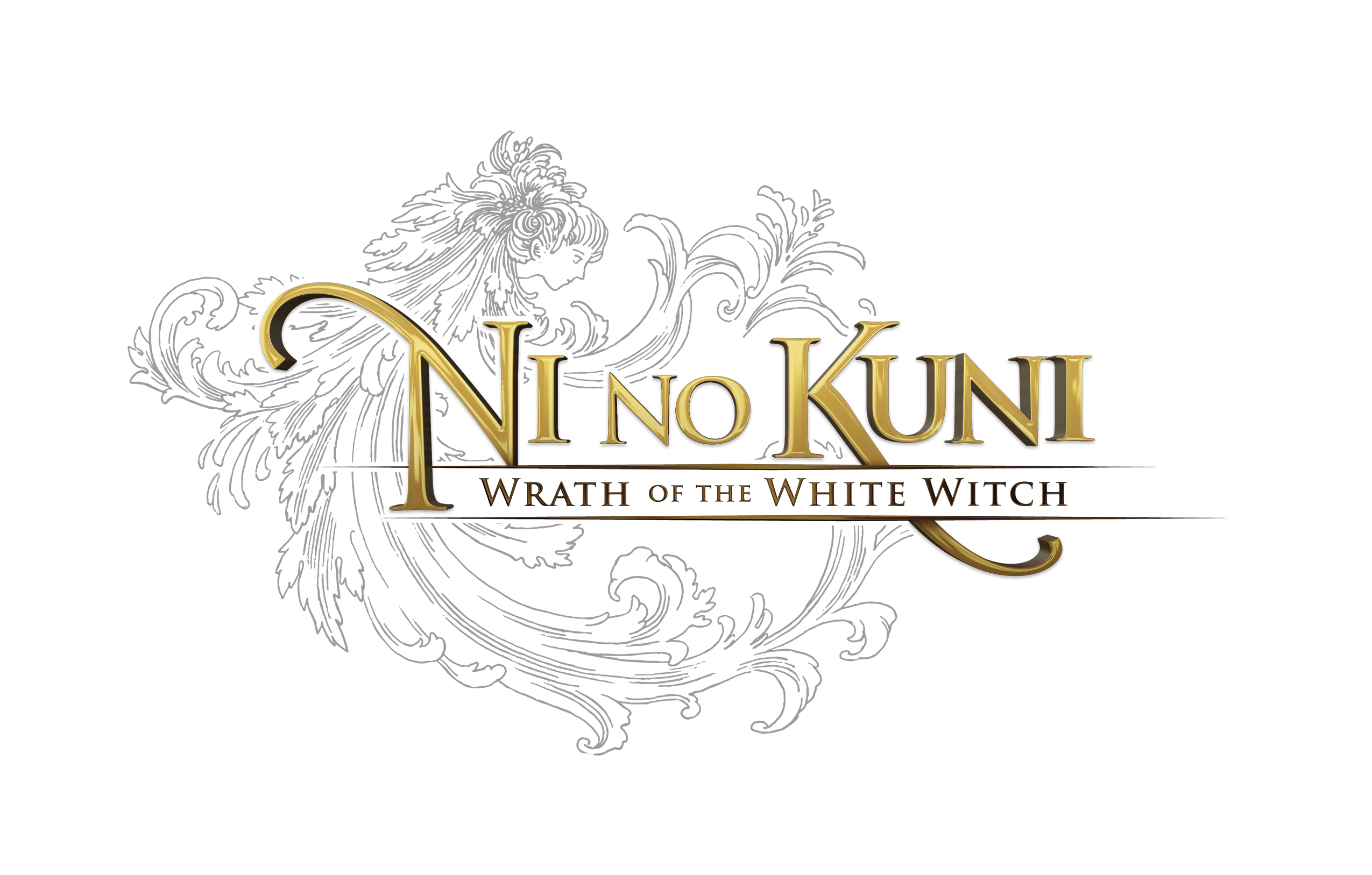