Long running franchises can be daunting.  This puts developers in a rough situation of trying to find a way to garner new interest while keeping existing fans engaged.  Capcom has shifted Monster Hunter from a niche franchise into something more accessible to everyone.  As a newcomer to the series, this is evident in Monster Hunter Rise as everything has a level of care and detail to it that feels beloved but also makes each fight feel epic but beatable.  There’s plenty to offer that makes the gameplay loop addicting: tons of weapons to craft, a balanced difficulty curve, and an amazing soundtrack. However, it’s lack a proper conclusion means it never feels like it hits a true crescendo, making it a tale of two games: one where each fight feels fresh and exciting, then slowly the thrill wanes as the monsters repeat and all that’s left is making the newest weapon to use.

Monster Hunter Rise is, on the surface, a very simple game.  Players take their weapon of choice from fourteen options that are available from the start and venture out into the hunting grounds to gather materials for crafting equipment and consumables.  Monsters start off easy enough but grow quickly in size, stature, and ability as players go up in ranks.  Each rank has a series of mandatory quests that need to be undertaken before an urgent one appears that must be cleared to gain access to the next rank.

Monsters have a lot of visual and concept variety, and can always keep a hunter on their toes.  Some have obvious weaknesses to exploit, while others are more a test of patience.  While defeating monsters is the primary goal, players will also need to take into collecting resources from them as they are needed to create stronger gear.  Doing enough damage to a particular body part will cause it to break giving extra resources, while different materials are available whether or not the monster is captured or slain, though it’s worth noting some of their strongest attacks only happen near death.  Monsters don’t just stand around, instead using their size and surprising speed to keep players engaged throughout the fight.  They can also scamper off from the player’s onslaught and retreat to regroup or regain health.  The meat of the game successfully evokes the feel of an extended hunt as each tough adversary takes fifteen-twenty minutes on average to take down, while an overall fifty-minute map timer leaves plenty of time for exploration as well. 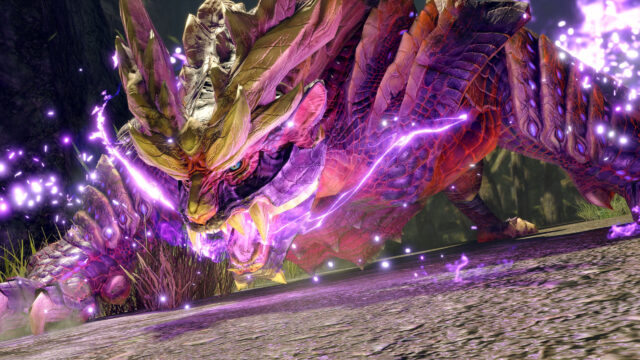 Monsters are very detailed and a delight to fight.

Exploring allows players to garner temporary buffs, additional materials, and complete side quests before heading back.  Helping in both movement, dodging, and attacking are wirebugs, of which players always have two, with a temporary third one usually found exploring the map.  These wirebugs allow for quick aerial movement that can take a bit of time to get used to, but are overall helpful in many ways.  Each map is a large zone that splits into segmented areas for players to explore or hunt monsters in, making the quick movement they afford a vital ability.

While playing solo players have access to two animal companions: a cat-like Palico and a dog-like Palamute.  These allies give the monsters another two targets rather than having them focus fully on the player at all times, while also providing needed support such as damage and healing.  Palicos also help gather materials from the map, while Palamutes can be hopped upon to traverse the map quicker than on foot while conserving stamina.  Monsters can also move around the map at their leisure and there’s a chance they’ll engage each other or pop into an area that players are exploring.  If they engage each other it results in a turf war, which are choreographed fight scenes where they do massive damage to one another or end with one monster being stunned for long enough that players can hitch a ride.  This allows the hunter to control a monster for a short time to deal damage and drop extra materials.

The key to taking down monsters is staying up to date on gear.  Creating enough for those five armour slots on the hunter and sufficient weaponry options means a lot of hunting, mining for ore, and searching bonepiles.  Making new weapons and armour can create scrap used by the Palicos and Palamutes to upgrade their gear, making the crafting process doubly useful as it gives the hunter options for both themselves and their animal companions.  However, seeking specific gear upgrades means players have to rely on luck and patience for the required materials to drop.  Sticking to a favoured weapon creates a lot of grinding to make sure the correct materials are collected and this repetition of fighting the same monster makes the thrill of the hunt lose some of its lustre. 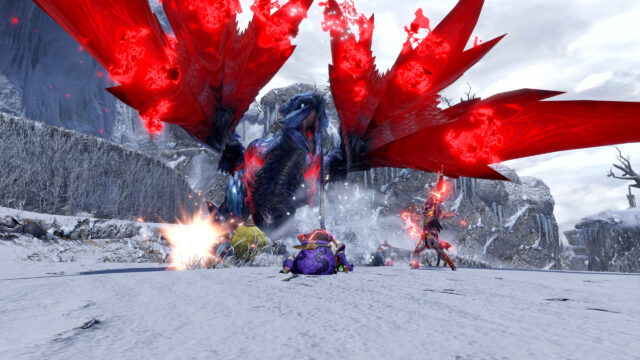 Teamwork makes the dream work when taking down some of these monsters.

Most missions will end if hunter faints three times.  This includes multiplayer, where the number of faints are allowable shared between all players.  The game’s primary jump in difficulty happens in the swap from single-player village quests to the multiplayer-capable hub quests, when the monsters get stronger and can scale with up to three other hunters.  Village quests have most of the story attached to them, providing appreciable structure for newcomers.  Hub quests, however, are more thrilling due as the training wheels come off as well as with the addition of multiplayer options.  Players can jump from one to the other from the beginning, which further takes away the importance of village quests.  However, both village and hub quests provide plenty of hours of content, so there’s lots to enjoy before some of the shine comes off.

Playing Monster Hunter Rise solo is perfectly possible but without the thrill of sharing conquests with others something feels missing.  Fighting the same monsters over and over for new loot can get monotonous, which becomes more noticeable after finishing the village quest line and swapping over to hub quests.  Hub quests add a few new monsters and a conclusion to the game’s sparse story, but the majority of the fights are just against harder versions of the same monsters for better loot.  This ultimately leaves the game petering out.  The balanced introduction of the world and story from the village quests is welcome as a newcomer, but it’s all dies away as soon as the swap to hub quest occurs. Hub quests therefore feel like a somewhat disconnected new game plus that’s simply about the challenge.

There are special rampage quests where it absolutely feels more frustrating to play solo.  Rampage is a gameplay mode where the players build defensive installations to defend Kamura village against a horde of monsters that appear in waves.  Players have two minutes at the start, then a short break between each wave — which begins when the previous wave leader is defeated — to set up additional installations to help defend the gates.  In multiplayer, hunters can work as a team to divide and conquer as some enemies focus on installations, while others aim for the gates heading to the village.  In single player, these fights are hard to enjoy as players have to do the job of four people by themselves, but are at least still able to be completed solo. 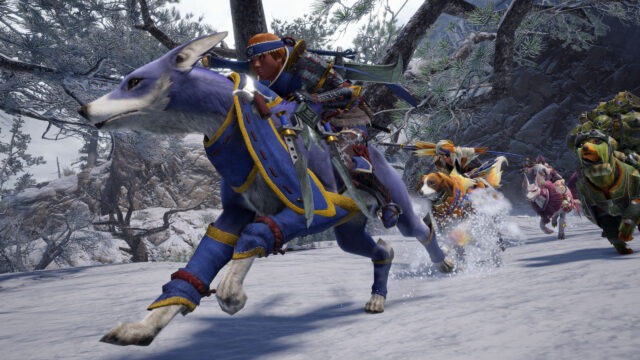 Onwards palamutes, to the next hunt.

This feudal Kamura village relies on hunters to go out and obtain resources for everyone to stay fed and for tradespeople to maintain their work.  The protagonist is a fledgling hunter leaving town for the first time and as they grow Kamura begins to rely on them to solve the village’s problems.  Fortunately, these problems are very much in the player’s wheelhouse of defeating the increasingly strong and violent monsters as well as dealing with the occasional rampage.  Unfortunately, that’s as far as the story goes, with the player character being a blank slate that exists only to defeat monsters and protect the village.  The rest of the villagers are little more than window dressing fulfilling their role as a different shopkeeper that provides buffs, crafting, and can send additional companions out on quests to gain additional materials.  The only dialogue they provide is flavour text hyping up the next major conflict with a monster by doing research that amounts to players fighting this threat the same as they would any other monster.  This simplistic storytelling manner won’t capture any players on its own, only serving as a way to hype up the next fun fight.

Monster Hunter Rise is a gorgeous game, with plenty of little details in each landscape and monster found in the wilds.  The detail drops a bit in Kamura village, while still detailed in its scenery, many of the characters look plain by comparison.  The player character gets to stand out through armour pigments, weapon skins, and character choices that make every one different, yet all work within the game’s aesthetic.  There’s a weight to each weapon’s attack, and the fluidity of motion combined with the intricate movements every monster add together to make every fight feel climatic.  Playing into this is a wide variety of tense orchestral arrangements that find ways to fit the surroundings.  Some larger monsters have their own score causing fights with them to be a unique treat.  These scores blend seamlessly into the feudal era-inspired ballads sung in town that alternate between haunting and uplifting.

Monster Hunter Rise is an excellent introduction to the long standing franchise, giving a multi-faceted approach to the world and style.  The variety of options for success against every monster leads to thrilling showdowns, heightened by fluid visuals and an outstanding soundtrack.  Without a narrative support the gameplay becomes tiresome eventually, especially once players focus fully on the hub quests.  Frustrations arise as players learn the game and find out those parts amount to an extended tutorial that lacks any real carryover into the rest of the game.  It serves as an enjoyable romp still, but makes going through the same quests at a higher difficultly feel less poignant.  Luckily, everything is so polished and accessible that every action aficionado should give fighting monsters a shot and see how long they’re able to embrace the hunt.