Every Face a Different Shade

Masquerada: Songs and Shadows is the debut PC title of Singapore’s Witching Hour Studios. Utilising the isometric viewpoint and real-time with pause combat of many classic PC RPGs, Masquerada nonetheless carves out its own identity thanks to some well-crafted lore and an engaging tale of intrigue in its setting of Ombre. While the gameplay fails to impress, the story at least manages to keep things interesting.

The Citte of Ombre, which has a clear Venetian flavour, is heavily divided by class. At the top are the Masquerada, with access to Mascherines, masks that bestow magical powers on the wearer. The game’s tutorial takes place after a man called Cyrus Gavar uses his position to gift a large amount of Mascherines to the lower class Contadani, starting a rebellion. Players are introduced to the combat through Cyrus before his part in the rebellion is abruptly cut short.

For the game proper, things flash forward five years as Cyrus’ brother Cicero, who elected to not join his brother’s cause, returns to the Citte from exile at the request of its leader. The war started by Cyrus is still going on, and both sides are losing precious resources. Mascherines are destroyed if their wearer dies, and there exists only a finite number of them. Cicero is tasked with returning to his former role as one of the Citte’s few Inspettore, specifically to find his former acquaintance Razitof Azrus. He is joined by Razitof’s brother Kalden and eventually picks up three more allies over the course of the investigation as it widens in scope. 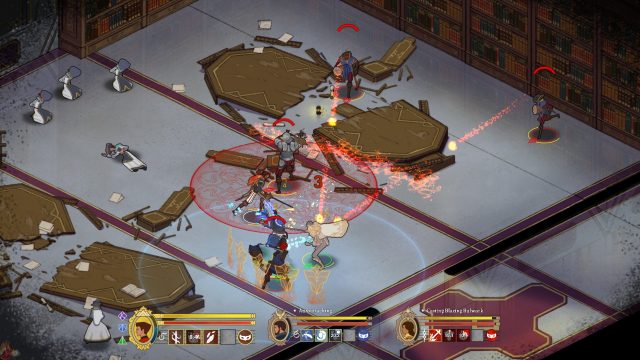 Well, one does one’s best.

The story moves along at a good pace with plenty of twists and turns, and supported by a great deal of lore. The presentation of the story is helped by an experienced cast of voice actors. The professional effort done in having every line voiced is appreciable and the game is considerably better for it. While there aren’t many scenes that seem to require award-worthy performances, all the cast do a pleasing job with the script and are key in helping to bring it to life. The biggest obstacle in the narrative is a far too heavy reliance on using in-world terms, a lot of which just seem to be there to add things to Masquerada‘s codex rather than having any impact on the story and world itself. The large number of factions on both sides helps to convey the level of intrigue and politics going on in Ombre, but makes things hard to follow at times. However, on the whole Masquerada provides an entertaining tale and succeeds as the primary appeal of the game.

Keeping to a strictly defined camera angle allows Masquerada to make good use of prerendered backgrounds. The game has a distinct art style that helps to differentiate it from other titles and works well, as do the lavish banners that drop down for the dialogue. There are moments where the backgrounds seem to be lacking in detail and the game is not brilliant at showing the action-oriented parts of the story, though the occasional switch to comic-style panels helps to punctuate key events. On the music side, Masquerada‘s score ably supports the visuals and voice acting, but does not stick long in one’s memory on its own accord.

While the story is strong, unfortunately the same cannot be said for combat. Despite the real-time with pause options being there ostensibly to allow more tactical approaches, things very quickly devolve into a free-for-all. The game’s balance of speed over attack power just doesn’t work, and if players want to exercise direct party control rather than letting the AI handle it, it’s next to impossible to keep track without excessive pausing and micromanaging. Trying to target specific enemies is a pain, and encounters on the whole simply aren’t very interesting. While a couple of boss fights will add something slightly different, things still play out very similarly with every fight. 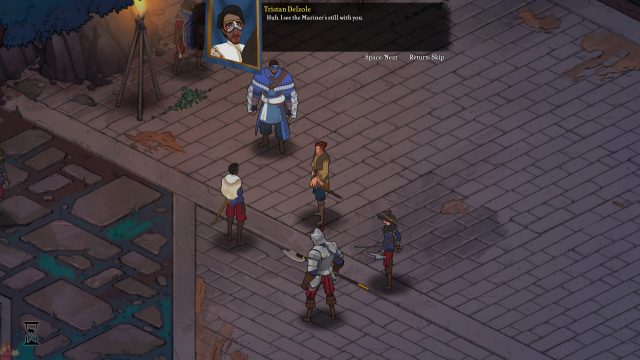 Look around, there’s another mask behind you.

An adjustable difficulty is appreciated for those who wish to focus on the story, however. It works in the context of letting the combat act as quick breaks between the narrative with battles going by swiftly, still requiring enough input to keep players somewhat engaged. There’s also only a minimal amount of character building with players able to upgrade little of import except skills.

Masquerada is very linear throughout. The vast majority of the time players are just running through corridors. Small amounts of exploration offer extra lore and Mascherines, but otherwise players are just following the path to the next battle or story event. In lacking a lot of the usual RPG fare as well — such as equipment (except Mascherines), decisions, sidequests, and NPC interaction — it really doesn’t offer much to those for whom gameplay mechanics are the main appeal of RPGs.

Those hoping for a solid all-around RPG experience will find Masquerada lacking. However, as a relatively quick narratively-focused experience — clocking in at a bit over ten hours, or more depending on how players approach the combat — the game does an entertaining job. There is a lot of potential buried in the world, and Witching Hour Studios should have cause to return to Ombre in the future, where a greater focus on the gameplay experience could help create something special. 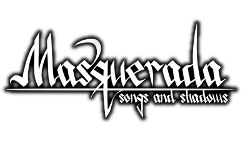