Mini-games are sometimes present in RPGs to give players leisure activities to do besides completing the main quest. In addition to attempting to bring more fun to the table, they usually reward players with important items. Following this idea, indie developer Wolfsden managed to incorporate several entertaining mini-games to create a charming fifteen-hour adventure. Manafinder is a cute pixel-art turn-based RPG that will appeal to many players with its sidequests and interesting battle system.

Manafinder is set in the world of Aevi, a dangerous and magical planet where the only way to stay safe is to be under the protection of mana barriers. The game stars Lambda, a warrior woman exiled by king Vikar of Manahill. Thrown out and with nowhere to go, Lambda must find a way to survive in a hostile reality, but she loses consciousness after being attacked by monsters. A group of exiles rescues her and takes her to their camp called the Settlement. Here, people have learned to survive without the aid of the king; however, in order to prevent their mana barrier from fading, the settlers need brave adventurers called manafinders to bring manastones. The Oracle, the leader of the Settlement, sees potential in Lambda’s prowess in battle and asks her to become one of these manafinders. This initial setup is engaging enough to propel players for the whole adventure, and the mix of solemnity and comedy in the writing is well balanced to deliver a journey with touching moments and laughter. The droll dialogue is delightful throughout the whole game, both in English and in Spanish, despite a general lack of commas.

The game’s story is divided into five chapters, each one gives Lambda a mission in a new area, allowing players to explore all the places of interest in this magical world. The first companion that joins Lambda is Scar, a dog who helps take on risky missions through varied landscapes. Several characters with distinct ideologies and personalities, including four gods who constantly interact with Lambda, make this magical world feel full of life, with these amusing characters ensuring a captivating story througout. The one disappointment is that Lambda’s history and past, including her ties to Manahill, are never explored. 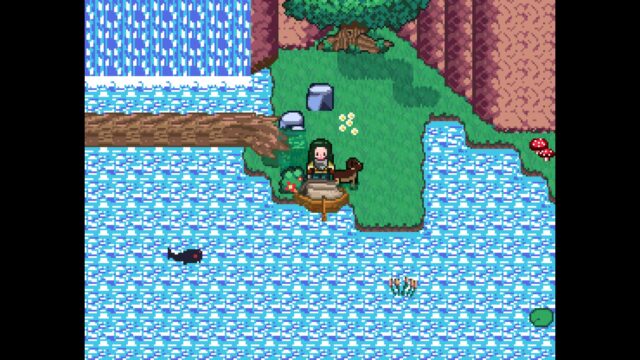 Lambda has a boat at her disposal for when she needs to cross rivers.

Lambda has important duties as a manafinder, but she can still help out with other chores in the Settlement. These sidequests are short, fun, and grant attractive rewards, such as empowering restorative items or upgrading Lambda’s weapons, giving players good reasons to fulfill them. Although these side activities are entirely optional, they help with the pacing of the game since they give variety to what players need to do and provide welcome breaks from exploring the world. As the Settlement isn’t very big, it’s easy to find denizens seeking assistance, and the game reminds players that there are sidequests to undertake via voices that Lambda hears in her dreams. New quests unlock early in each chapter, and the fast travel option allows players to quickly tackle them if they wish to do so.

The majority of sidequests come in the form of mini-games and only few are fetch errands. These games include answering quizzes, with questions featuring a nice touch of comedy; bartending, which involves trying to please clients before they get tired and leave; playing games such as tag with some spoiled kids; and training Scar. Players can also hunt tough enemies, with a local hunter adding five more marks each chapter. These rare beasts are not particularly difficult to find or kill, and Lambda receives good prizes for slaughtering them. However, a couple of battles with these rare beasts are difficult — if not impossible — to trigger and may produce some frustration, yet a future patch could solve this problem.

There is a vast array of items that cure diverse status ailments, recover health, or permanently boost stats. The most powerful restorative items are called komaleaves, and can be replenished by harvesting them from komaplants. Komabiscuits, which are special restorative items for Scar, can also be obtained from the roots of these plants. With komaplants, weapons, spells, ores, and other items to be found, exploring is fun and rewarding. Dungeons are diverse and also incorporate different activities, such as dodging rocks, using boats to cross rivers, and solving puzzles in order to advance, which prevent exploring from becoming repetitive. 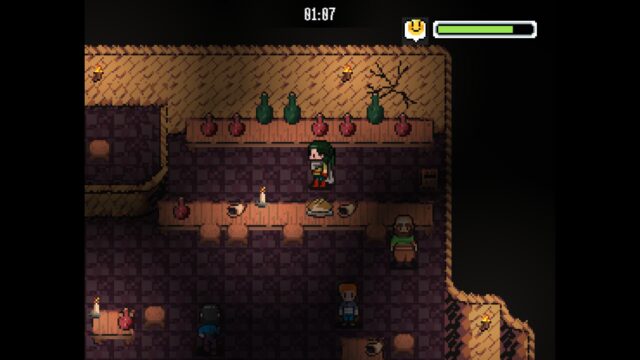 The job of a bartender is not an easy one.

Enemies roam each area and engage in turn-based combat when they are touched. The battle system focuses on using different weapons for each situation. Players need to choose a weapon each time they attack, with different weapons being more effective against different types of enemies. Manafinder also includes an elemental system in which players imbue themselves with elements to deal more damage while attacking and become resistant to certain attacks while defending. However, since every element is also weak against another one, imbuing also exposes players to a weakness. Imbuing doesn’t consume a turn in battle and can be done in two ways: using ores collected from mining stones or using a magic spell. Magic skills consume manashards that can be collected while exploring, and they include a varied set of buffing, healing, and offensive skills. Learning how to properly exploit all these elements allows players to defeat even strong enemies and bosses in just a few turns, which is highly rewarding.

Unlike Lambda, Scar cannot be directly controlled, but players can still tell him to go all out or focus on healing, as well as selecting which target Scar should attack. Both Scar and Lambda have a gauge that fills whenever they deal or receive damage, and when the bar is full, they can unleash drastically stronger attacks, with each weapon having a different unleash ability. Defeated enemies drop soul dust, and Lambda offers this dust to one of the gods to level up whenever she is resting. In addition to increases in stats, players receive a blessing each time they level up. These blessings can be offered to the other two gods to obtain magic abilities, passive skills, or status enhancements. In this sense, players customize the growth of Lambda and adjust it to their fighting style. 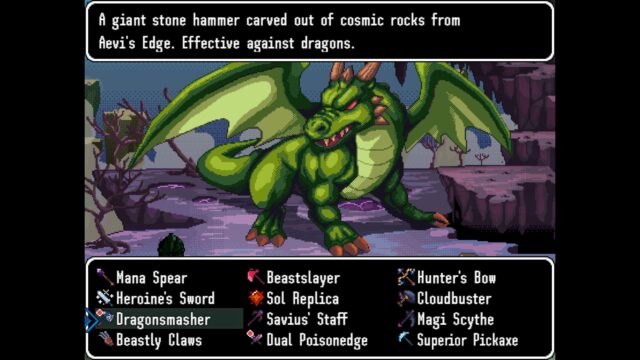 Lambda does not hit dragons; she smashes them.

Manafinder uses pixel art to create cute visuals. The characters look adorable, and the world of Aevi is a charming backdrop with its diverse sights. The presentation while exploring is captivating, but the game looks its best during combat; the enemies, the backgrounds, and the animations are very engaging. There are more elaborate visuals during certain story moments, making those scenes more impactful. While the music and sound effects are mostly decent, the normal battle music, the victory fanfare, and the sound effect when entering battle are mediocre, and these three things are what players will hear the most, sadly. Even excluding these three letdowns, the soundscape as a whole is easily forgettable once one exits the game.

With staff members in Mexico and Seattle, Manafinder is definitely a triumph for this small indie developer. This turn-based RPG incorporates varied mini-games in a satisfying way to keep the adventure refreshing and fun. The mix of features in its battle system work perfectly to make combat highly enjoyable and rewarding. Manafinder is recommendable to RPGamers who want a short and charming journey with cute visuals.