Ocean Drive Studio made its debut this year with tactical RPG Lost Eidolons. Drawing inspiration from the gameplay of titles like Fire Emblem and combining it with a realistic graphical style and medieval setting, the game has elements to appeal across the RPG spectrum. Although its story and presentation elements wear a little thin after a promising start, there is nonetheless plenty to enjoy thanks to a decently deep battle system that offers plenty of challenge for those who want it. It’s a strong debut that offers plenty of optimism for the developer’s future projects.

Lost Eidolons is set on the continent of Artemesia, formerly home to multiple nations but united into a single empire some years before the game’s events. However, the conquering Emperor Ludivictus has aged, corruption is now rife, and the empire is clearly on the wane. The game follows Eden, leader of a mercenary company based in the village of Lonetta in the former kingdom of Benerio. After taking on a mission to rescue a woman from a local lord, he soon gets wrapped up in a full-scale rebellion that spreads across the crumbling empire.

The game’s campaign is spread across 27 chapters, each with its own story battle. Players select an active party of up to ten units for each battle, featuring a turn-based system on square-gridded battlefields. Players get free reign each turn to command their units in whatever order they wish, with each unit able to move before attacking or using a skill or item. Rather than its effectiveness system pitting weapon type against each other, Lost Eidolons pits weapons against armour; axes work well on plate armor usually worn by frontline fighters, while swords are best against leather armour, and arrows effective against the cloth armour most commonly worn by mages. Magic combines very well with terrain effects, which play a key role. Wooded areas can be set fire to, dealing extra damage to units within, while wet units have reduced movement and are weak to lightning spells, but in turn will receive less damage from fire attacks. Skills and spells have a small number of uses within each battle, making players give thought about when best to use them. 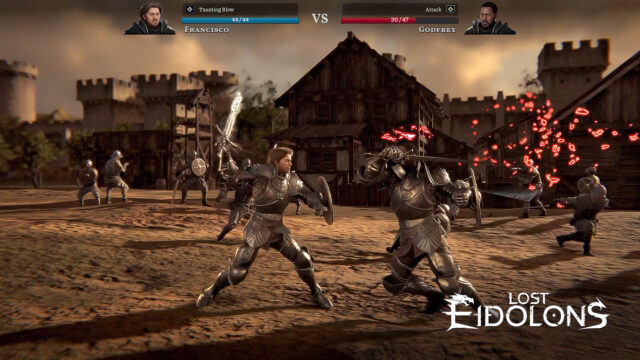 The turn-based combat has some obvious inspirations, but enough differentiation to stand on its own.

All of this leads to a combat system with an appreciable amount of depth and a good range of strategic considerations open to players, which steadily increases over the game as players unlock more classes and options, such as assigning inactive combatants as aides to the active party members. Status effects, usually inflicted by limited-use skills, can play an important role and will be taken advantage of by allies and enemies alike. In certain battles, players will encounter monsters rather than human enemies, which have their own effectiveness systems. Monsters take up multiple squares, and two or three of these will be marked with an attack type that is effective when struck directly. This changes them into more of a puzzle encounter as players figure out how to manoeuvre themselves and turn the enemy to take advantage. Throughout the game, the combat remains engaging; it’s easy to get to grips, but has enough depth to last the fifty-plus hour runtime.

The game contains multiple difficulty options selectable at the start of a playthrough. Its regular option poses a strong challenge to players, with there also being an option to prevent any felled ally units from participating in future battles. Enemy AI will readily round on susceptible units in range and use skills that cause status effects. There is, however, a story mode available, which is very player-friendly. The game also gives players a good number of opportunities to undo their actions should they make a mistake. While there is a hard turn limit with each battle, this acts more as a bonus element as the game provides more experience points for completing a battle more quickly, with the limit rarely becoming an active restriction.

Lost Eidolons contains a few ways to power up characters. First and foremost is the standard experience-based overall levelling system, but this is accompanied by separate experience levels for individual weapon and armour types. Equipment is a bit less interesting, not helped by a fairly clunky UI, as it boils down to finding a couple of rarer versions of the those items already equipped, with only a few unique items differentiating themselves. Accessories provide some skills, but there aren’t many of them to go around and make it worth trying to build upon. The primary way players can differentiate otherwise similar party members is to branch them off into different classes. There are three tiers of classes, unlocked based on unit stats and story progress, with each tier adding more options to branching into. Different classes let units focus on particular skills or weapons, or in a few cases become all-rounders capable of wielding both magic and weapons. 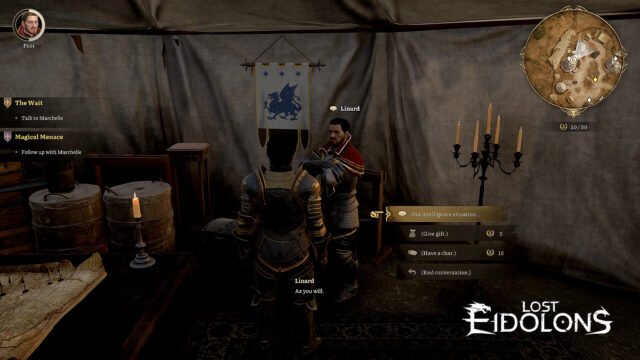 Between battles players get to wander around camp and grow relationships.

Between story chapters, players get the opportunity to wander around their force’s camp. Here Eden takes part in conversations following from the previous and leading to the next story battle, as well as optional quests that see him talking to other characters, finding something around the camp, or participating in an optional battle. Players also get the opportunity to build their relationship with party members, and recruit additional ones. Doing this involves undertaking special conversations with them during a meal or training, or giving them gifts. Each of these actions, however, uses up the limited number of leadership points Eden has for each chapter. Unfortunately, this turns out to be restrictive largely for the sake of it and players will have to be selective about who they choose to spend time with if they want to get characters to their highest rank. In addition, the optional battles are limited to the same small selection of scenarios that just gets cycled through with higher level enemies, causing them to soon grate.

The story starts out promising as Eden and the Lonetta mercenaries find themselves caught up in something bigger than they planned. It’s certainly aided by a strong core cast of characters; the initial members show great camaraderie from the start, and those who join quickly find their place in the group. Interpersonal conflicts and character growth are also played well, and the game makes use of its character relationships for a couple of memorable emotional events. The game’s voice acting, featuring many experienced names, does a great job giving voice to the characters and turning up the impact of their interactions.

Where the narrative is dragged down is in its presentation. Most of the event scenes feature just the relevant currently talking character’s model, which disappears once they’ve said their sentence as the next character pops in. In addition, many of the game’s story threads appear out of the blue, are suddenly cut off, and/or are left hanging. Many characters are gone just as suddenly as they appear, while the main villain is telegraphed from the outset, make the story swerve not at all surprising. The final chapters drag on, and though the actual plotting of how it ends makes sense, the threat rather peters out in a disappointing manner given how some of the deeper potential lore threads ultimately go by without detail. 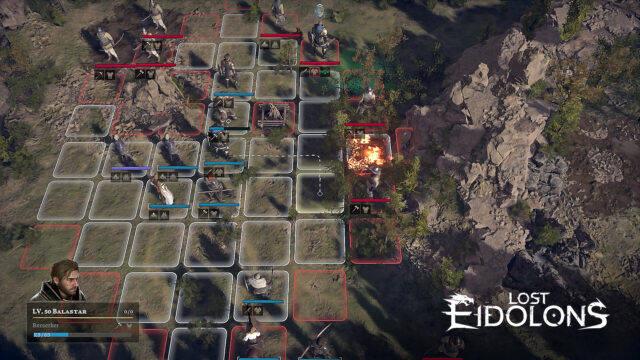 Combat and the graphical detail look good, but the story presentation drags the game down a bit.

There are multiple endings, which seem to depend on a few trust choices during the story, however, the actual endings are limited to a couple of splash screens at the end, which dilutes the accomplishment of finishing the game and fails to provide a satisfying hint to what comes next or the state of the world. Some optional quests and events can follow previous choices or are unlocked by character relationships. This gives a potential extra bonus for those planning a replay to enjoy the game’s challenge some more, but there definitely isn’t enough substantial change to justify a replay on their own.

Story presentation notwithstanding, Lost Eidolons is certainly pleasing to look at. Its realistic graphical style is well implemented, keeping its characters distinguishable, even when they share class-based outfits. Battle animations are all well-done and the game’s environments have good details, though some tiles can be subtle and players might need to rely on a tooltip to see if one is currently muddy, for example. Waiting for enemy turns can get tiresome, but the game lets players skip through either single animations or the entire turn with a single button press, which is very much welcomed.

Lost Eidolons shows a lot of promise, especially as a debut title. Its combat ensures that tactical aficionados will get plenty of enjoyment from both the challenge and depth available to them, while Ocean Drive Studio has also ensured that there’s enough to get the more casual fans on board as well. While the game’s story ends up fizzling out a bit, there’s plenty to look forward to should the studio elect to return to Artemesia in future.