What if an action-roguelike decided to use moving platforms of various geometric shapes to mix with its tough gameplay?  That’s the main question asked by straka.studio’s Loot River.  With each run clocking in at a little under an hour, the game is a lot of fun, if reliant on luck for new equipment that could decide a run.  Even without the best of luck, players still feel a rush as they get the timing of another enemy, or breakthrough the defences of a boss. This joy from progression can quickly get stale with no notable narrative elements to speak of and each run only featuring the slightest of deviation.

In Loot River, players take on the role of a nameless adventurer who wakes up in the hub town of Sanctuary after being pulled from the brink of death into a mirror world to end its cycle of death and rebirth in an mirror world.  The adventurer ventures forth dutifully into the catacombs then to take down the enemies and bosses within.  After completing each stage, players end up back in Sanctuary for the chance to upgrade and unlock new gear with Knowledge obtained from defeating enemies.  Death in the catacombs means having to go through all the stages once more from the start with shuffled layout, though certain permanent unlocks are kept.  The game’s minimal conversation comes from various shopkeepers, who all profess disbelief that the adventurer can succeed.

Loot River‘s combat is its strongest aspect.  There’s a lot of variation in enemies, with each providing a distinct look, animation, and, most importantly, a refreshing attack pattern.  Players can just bulldoze enemies with strong weapons, but for the most part, they will have to learn the correct timing to parry attacks.  Happily, the game is very fair with hit boxes; there are no phantom hits with the relatively small characters on the screen, with close calls resulting in misses on both enemies and players alike.  The variety of weapons available to find have slightly different timing to attacks and parries, making each one feel nuanced and the mastering of them feel rewarding.  Players start the adventure with a fairly weak sword and spear but as they progress they unlock more from treasure chests, enemy drops, and the First City vendor Callum.  Callum provides players with chancy deals; if his offer is accepted, he takes a portion of the players stats, health, coin, potions, or knowledge — or on rare occasions nothing at all — and in return unlocks a new weapon.  Callum’s weapons tend to be notably stronger than those found regularly and often can turn a run into a cake walk, somewhat undermining the risk. 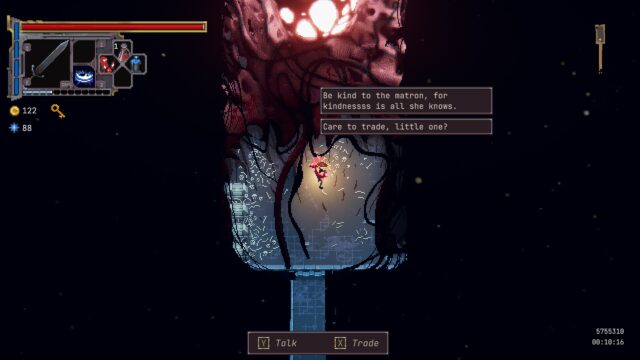 Hello there Callum, what trade is available today?

Though stats and gear affect elements like health and damage, up until players get hold of sufficiently powerful weaponry, the game still boils down to the skill and timing players accrue.  Players can equip up to three charms.  These can grants players additional stat boosts or effects such as additional damage on enemies that get knocked back.  These charms are always helpful but are entirely found on random chance.  There is different armour, but its effects are usually minimal, though hats can spice things up a little by providing effects like randomized stats on the next run or scaring enemies into occasionally running away rather than fight.

In addition to parrying, players have access to a quick strike and a charged attack that unleashes a flourished animation or a special ability depending on the weapon equipped.  Platforms can also be used strategically as players can split up enemy groups by tempting a few enemies to cross while two are connected, or can time it to attack enemies just as they meet.  Weapons have knockback and poise value, which indicate how far they push enemies away and their parry timing.  Each weapon also has two spell slots, which sometimes come pre-filled with random spells selected from those unlocked at vendors.  Spells are fun diversions that can help a player out of a jam, particularly the shield that repels enemies, though ultimately feel like complementary extra weapons. 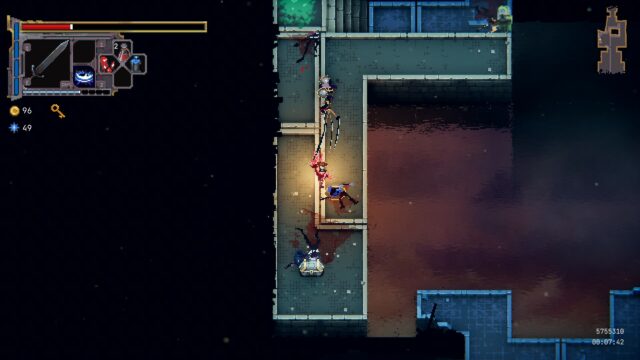 Timing against a longer ranges enemy can still be done, particularly with loot that close by.

Each run in Loot River is denoted by a random seed on the bottom right of the screen.  The seed primarily affects map layout and enemy placement while many other things stay constant; for example, the First City will always have a path to reach Callum, and bosses are always in the same spot.  More significant alterations can be made using Artifacts, which can modify the catacombs.  Some of changes from Artifacts include random starting weapons and spells or different abilities for enemies and bosses.  These modifiers not only provide variety to a run, but they also allow players to unlock the game’s true ending.  Only five Artifacts can be equipped at a time, but this is more than enough to give players a wide variety of possibilities.  The Artifact system works well in tandem with the rewarding combat and steady drops to make players feel that they are taking a step forward with each run.

Healing provides another interesting mechanic in Loot River.  Players are given four potions at the start of their adventure, but can invest them with an alchemist.  Players receive two potions after completing a stage for every one invested. This is the only reliable way to obtain potions, though players can get lucky and find items such as a charm that can spawn potions from successful parries.  This means players have to weigh up their chances for a given stage, and figure out how many potions are needed to stave off death and starting the run anew.  This risk and reward system makes for some tense moments as going through a whole level without potions and surviving is exhilarating.  Conversely, a bad run, horrible luck, or coming across a new boss often mean having all the potions in the world won’t help. 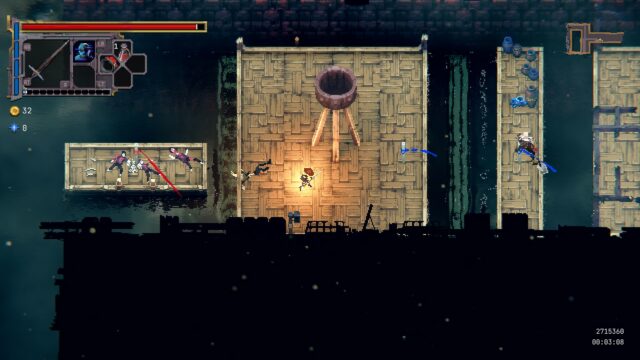 The soothing motion of the river is well animated.

Too often Loot River feels like it is just going through the motions.  With patterns that only change slightly with the same starting point and bosses, the only impactful variable is the loot players get each run.  Unlocking new things is fun while the combat feel rewarding, but it starts to feel dull.  The first time players take down a boss brings about real moments of joy, but subsequent runs feel lesser as Artifacts and exploits largely convert them just another enemy. Some of the exploits have been caught and fixed, but with no changes to the bosses, the fights feel like routine.

Loot River‘s graphics work nicely in the little moments, from the ripples in the water as platforms glide through it, to the attack animations there’s a lot to appreciate.  The methodical animations for each strike and parry while gliding through each segment of the river helps with the top-down camera focused on the adventure drives home the incremental progression with a sense of loneliness.  Enemy designs are nothing special on their own but adding in the animations make each one feel distinct.  The soundtrack bounces between slinking into the background and letting the sound effects play up the loneliness, to hammering down on the frenetic tension during boss combat.  Parries, strikes, and enemy screams echo slightly making the sound effects stand out a bit more than the music, which sometimes gets lost in the shuffle.

Loot River has a lot going for it with precise fluid combat and methodical progression.  It has had some technically hiccups, many of which have been ironed out with quick fixes, though their presence in the original release is a disappointment.  The progression feels stunted with only a slight variation to each map to keep players coming back for more.  Loot River‘s mileage will vary, with refreshing timing-based combat it can feel like a fun distraction or a listless drift down the river.