A Little Too Random

Game Freak, while best known for Pokémon, isn’t afraid to occasionally step away from its core franchise to dabble in standalone games.  As a Solitaire fan, its previous outing, Pocket Card Jockey, was a regular star on my 3DS.  Now the developer has put forward its first original Switch title in Little Town Hero.  Though it sparkles with ample potential, a slow combat system and inconsistent localization do trip up what is otherwise a lighthearted, fun game.

Unsurprisingly, the story of Little Town Hero is about a young boy who becomes the hero of a little town.  Axe, one of many name puns, is supported by numerous childhood friends, concerned adults, and random villagers that all curiously look the same.  His quest to leave the little town he was born in is stymied in a variety of ways, particularly by the monsters now arriving regularly in this once peaceful glade.  The story is cute, and while it runs along predictably in the first half of the game, it takes off in a most interesting direction after the fifth chapter and ends up being one of the best parts of the game.  Just when things seem to be going in one direction, the plot twists into a completely new direction and subverts expectations to become the most interesting aspect of Little Town Hero. 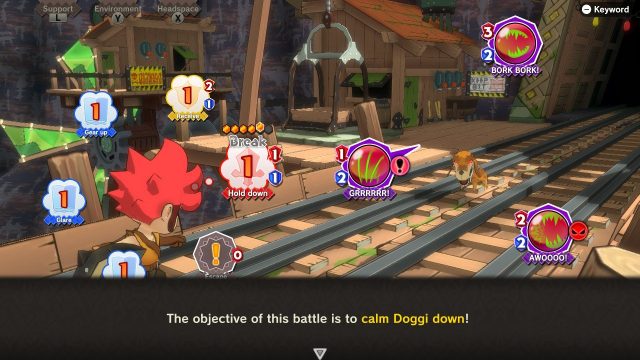 Side quests are available for players to pursue for additional story and rewards, but unfortunately attempting to complete them feels akin to whack-a-mole.  These quests can be entirely missed if not accepted during the small number of times they are available if a main story is triggered, and the same goes for the one or two opportunities per chapter to freely roam around the little town.  Furthermore, the game’s fast travel system, introduced very early in the game, is locked out for several hours of main story progression, making its introduction feel awkward and out of place.  Like many parts of Little Town Hero, the implementation hinders what could be really interesting additions to the game.

Axe faces multiple monsters and other foes while discovering the secret behind why nobody ever leaves the village.  The turn-based combat in Little Town Hero is where the game both shines brightest and falters the most.  Axe is a creative young man, pulling down “ideas” from his headspace like a deck of cards.  These half-formed ideas are referred to as Izzits and come in three colours: blue, which apply effects like buffs, debuffs, and direct damage to the enemy; yellow, which are defensive moves that can be repeatedly used in a single turn; and red, which are the primary way of dealing damage to the enemy’s health pool.  Each Izzit has a cost of between zero and six, and becomes a Dazzit when activated.  Axe starts with three activation points per turn and this slowly increases to a maximum of six.

The goal of each turn of combat is to destroy all of the enemy’s Dazzits, leaving Axe with a chance to attack the foe directly, and this requires one unused red Dazzit.  If Axe doesn’t have a free red Dazzit, one battle point (BP) is awarded instead.  These BP can be used to either pull a specific idea from Axe’s headspace, or refill the headspace entirely.  With thirteen Izzits in total (four red, four yellow, and five blue), and a maximum of five on-hand at any given time, players must rely on some luck to have the right mixture of attack, defence, and buffs to succeed, and the pacing of a fight can change drastically based on availability of key Izzits. 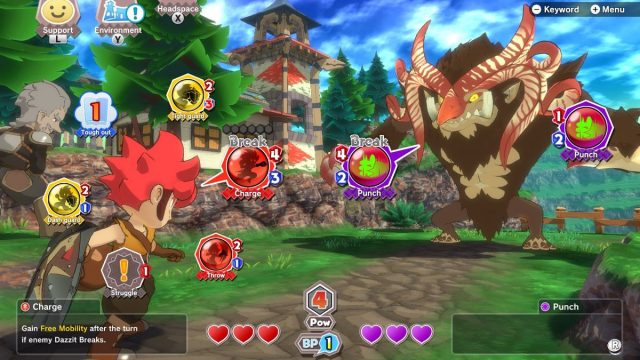 Major bosses can take as little as fifteen minutes, but this can increase to over an hour with bad attack draws or poor movement rolls.

After each turn, the player rolls a movement die, shuffling one to four spaces depending on what number is rolled, though players can choose their preferred space by activating the buff Free Movement on their turn.  Spaces can provide fun spice to combat; some will have NPCs waiting, which have a variety of abilities, while others house special boons like a chicken to throw or a cannon to fire.  These effects, activated by specific red Dazzits, are crucial to overcoming each chapter’s end boss, which are significantly more challenging than other fights within a chapter.  These fights can last as little as a handful of turns, easily being completed in fifteen minutes, or, if the player is particularly unlucky, can take over an hour.  Other fights in each chapter, many of which are closer to themed combat puzzles, are far more engaging than these repetitive end-of-chapter bosses.  Were the randomness removed from either movement or Izzit distribution, the combat would be far more streamlined and the pacing flaws of big boss battles wouldn’t be nearly as glaring.

Unlocked in the third chapter, the Eureka system allows players to buff each of their Izzits.  Taking full advantage of these talent trees is very important, as each unlock provides not only additional attack and defence points to red and yellow Dazzits, but also markedly improves upon the damage doled out or buffs provided by the increasingly important blue Dazzits.  Eureka points are acquired by completing main story tasks, side story quests, and winning a variety of combat challenges, with extra points awarded if a player loses to an end-of-chapter boss, to ensure each Izzit remains in tip-top shape.  Oddly, it is only possible to finish the full skill tree by losing to an end of chapter boss at least once.  Additional Eureka points can also be acquired by revisiting each boss fight via the local Scarecrow, though Axe is locked into predetermined decks of Izzits that are markedly different to what players will have used in the story battles.

Much like the other aspects of Little Town Hero, the quality of the game’s localization has glimpses of brilliance alongside head-scratching moments.  The Eureka skill tree has multiple typos, with one talent claiming an upgrade gives it +2 to attack when instead it bestows +2 defence. While the named villagers each bubble with personality and depth, and the story provides an interesting mid-game twist that breaks the previous predictability, the localization randomly switches between a stiff formal tenor and a more easygoing, conversational tone, even within a single character’s lines. 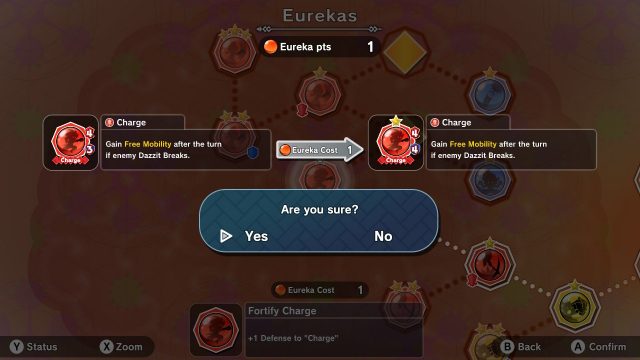 The Eureka talent system has localization flaws but adds nice depth to the game.

Continuing the theme of uneven handling, the graphics and sound of Little Town Hero don’t add much to the overall experience.  The graphics are cute and cheerful, and each part of the village feels a little different from the next, but the game keeps shoving the camera downwards when moving between certain areas.  There’s also a jarring difference between the named characters, which have beautiful, brightly coloured designs, and the bland identical models of the other villagers.  The game’s music is also neither especially good nor particularly terrible; mostly, it sounds a lot like Pokémon music, and certain sound effects seem borrowed from other Nintendo titles.

Overall, Little Town Hero is a lot of great ideas mashed together with a solid story, but unpredictable combat, average graphics and forgettable music drag down and tend to overwhelm the best parts.  Reducing the randomness of the largest battles or otherwise streamlining these encounters would have noticeably improved the game’s overall flow.  As it stands, Little Town Hero is neither especially great nor particularly bad but harmlessly average; with ample patience in the face of bad luck, there’s the sparkle of an enjoyable gem hidden under the game’s false starts.