Kingdom Hearts is a series I’ve missed out on up until now, mostly as a result of both not being particularly into RPGs nor owning the relevant console at the time it first came out. Various spin-offs have appeared on all manner of platforms since, but the connections between them all meant there was never an appeal to leap in randomly. With Kingdom Hearts HD 1.5 ReMIX, there was finally a good chance to get acquainted with the series at the beginning. Unfortunately, the impression that it’s left me with is that I hadn’t missed all that much.

Kingdom Hearts HD 1.5 ReMIX includes full versions of the original Kingdom Hearts (using the content from its Final Mix version, never before released in the West) and its immediate sequel, Kindgom Hearts: Chain of Memories (using the Re:Chain of Memories content that was released in North America on PS2). These games are joined in part by Kingdom Hearts 358/2 Days, an interquel taking place between the first game and Kingdom Hearts II, which appears as a full set of high-definition cutscenes. So there’s not much to complain about in terms of game time. The full games should eat up around twenty to twenty-five hours each on a single playthrough, with the 358/2 Days content taking another two hours or so.

The series begins on the Destiny Islands, home of friends Sora, Riku, and Kairi. The islands are soon attacked by shadow creatures called the Heartless. After seeing his friends disappear and coming across the Keyblade, a weapon effective against the Heartless, Sora ends up in Traverse Town. Meeting Goofy and Donald, who are searching for a “key” under instructions by King Mickey, the three decide to travel together to accomplish their goals: Sora hoping to find Riku and Kairi, while Donald and Goofy hope to find both the key and the now-missing King Mickey. 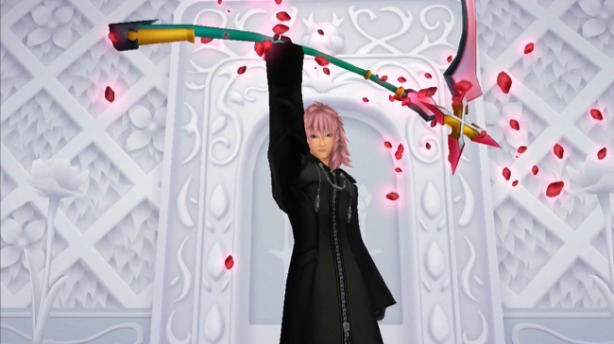 Amongst the more standard weapon designs.

The straightforwardness of the first game’s tale works in its favour. At lot of things go by without much explanation, but the way it’s written makes it very easy to just accept and focus on the main characters and their motivations instead. Sora is a very likeable lead, superbly supported by comrades Donald and Goofy plus the other cast members, both original and those imported from Disney and the Final Fantasy series. The various Disney worlds that are visited each contain their own sub-stories where Sora, Goofy, and Donald must assist that world’s heroes, and these are always quite enjoyable and a nice source of nostalgia for those familiar with each tale.

Final Mix sports an action-based, almost hack-and-slash battle system with a few menu-based cues taken from the Final Fantasy series that work to debatable levels. The usual moves, such as standard attacks, dodging, and jumping are all simple enough button presses, but Sora can use the menu system in the bottom left to use items and cast spells or summons. The other party members are computer-controlled and can have their behaviour adjusted by the player, although it is sometime difficult to judge whether or not they have a meaningful impact. The game allows three spells or items to be assigned to a quick shortcut, which is useful, but using any magic and items outside of these is awkward, as players need to keep one eye on the main screen to dodge any attacks while attempting to navigate the list of items and skills. It’s also annoying that Sora and company can only use items if they have been equipped beforehand, mostly because if players wish to replace any previously used items it must be done manually via the main menu each time.

Very frequent and repetitive encounters against largely unvaried enemies hold back the main chunk of gameplay from being little more than a mediocre action RPG. There’s much less a sense of accomplishment for getting through each location than there is a relief that the particular section is done with. The majority of boss fights aren’t particularly enjoyable either, largely due to coming with sudden difficulty spikes that sit at odds with the rest of the battles. A number of platforming sections and puzzles attempt to provide something other than straight up battling to do, and these are amongst the more interesting parts of the gameplay. Unfortunately, the encounter system more often than not insists on getting in the way of these. It’s very frustrating to be in the middle of a decent platforming section, only to find it interrupted by yet another set of enemies appearing at an inopportune time. The camera certainly doesn’t help things on the combat or platforming fronts either; it frequently has a mind of its own and not a very intelligent one at that. Another additional gameplay aspect is the shoot’em-up sections that occur when travelling between worlds. For the most part these are a nice change of pace, even allowing players to spend time designing their own ships to use, but there isn’t much in terms of reward and the ship-designing UI is far from perfect. 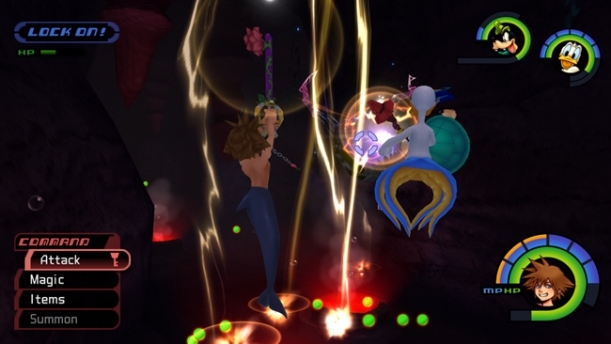 Following on from the events of the first game, Re:Chain of Memories sees Sora, Goofy, and Donald enter Castle Oblivion, which causes those who enter to lose their memories as they progress. Believing that their missing friends can be found within the castle, Sora and company attempt to venture up the tower, uses Sora’s memories to recreate versions of those worlds he visited in the first game. One major disappointment for Re:Chain of Memories is how all the Disney content from the first game is shamelessly rehashed. Players get a much more simplistic run through of what happened in each world last time out, which adds nothing to the game and just dilutes the charm the world previously introduced. The game attempts to enliven the overall plot by introducing some interesting new characters and the mysterious Organization, but the end result is that many questions are suddenly asked with very few answers forthcoming. Re:Chain of Memories also includes an additional storyline, unlocked after the original is completed, where players control Riku as he advances up through Castle Oblivion’s basements (the same worlds as Sora’s journey in reverse order), aided by King Mickey and also running upon members of the aforementioned Organization.

Square Enix mixed things up for Chain of Memories, this time merging the action RPG base with a card system. Attacks, spells, items, and even Donald and Goofy are now in the form of cards numbered from zero to nine, with a higher number able to break the opponent’s card and stop it from being used, and zero acting as a wildcard that can break any number but that can also be broken by any number. Combinations of cards can form sleights, a singular skill that is usually considerably more powerful than the sum of its parts, and unleashing these can be pretty satisfying. The merged battle system has some merit, but still features its own set of problems. Unfortunately, both the tedious encounters and awful camera that caused problems in Final Mix remain in Re:Chain of Memories. Individual encounters are at least a bit more interesting with being able to burn through sleights fairly quickly, and it is a bit easier to ignore them as a result of platforming elements being cut down. Meanwhile bosses, both recurring and new, seem to have been tuned to be a bit more straightforward, but still have very noticeable difficulty spikes and their own frustrations when the game suddenly decides it wants to be more action-based and forces players to both sort through cards and concentrate on dodging at the same time.

Instead of exploring fully pre-set locations and layouts as in the first game, players now move around a set of rooms, using door cards dropped by enemies to determine what is in each room. Each door card has a special effect, such as pre-stunned enemies or strengthening Sora’s magic cards. It’s an attempt to break up encounters a bit but it’s nowhere near enough to distract from still similar battles, particularly as most rooms feature several of them and the rooms themselves are all very uninteresting and repetitive. Both games include three difficulty levels, but annoyingly there’s no option to switch after the game has been restarted. This restriction is especially annoying as it will be at least some hours until the schizophrenic balance gives enough indication of whether or not players would prefer to adjust it. 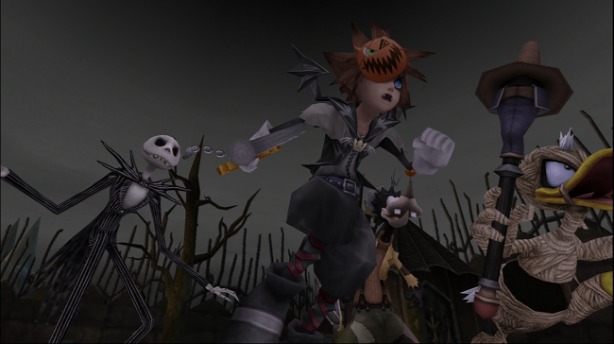 Costumes are mandatory at Halloween.

358/2 Days is the odd one out in the collection, not just in existing with all of its gameplay removed, but also in how tangential it feels compared to the other two games. The story focuses on newbie Roxas’ time with the Organization that appeared in Re:Chain of Memories, and his friendship with follow members Axel and Xion. It’s bad enough that the content of the cutscenes and the text descriptions on their own are mostly uninteresting, but in relation to everything else the whole entry feels meaningless. It may pay off in games that follow on later, but in this set it feels out of place, providing no resolution to anything that happened in the other games, and failing to answer most of the questions it brings up itself.

On the visual front things look decent, the art style works well in linking both the Disney and non-Disney characters and worlds, and things look consistent across the board, although Re:Chain of Memories‘ generic locations and rooms are disappointing. KH 1.5 appears to have been better suited to the job of being upgraded to the PS3 than many other HD re-releases. There’s certainly nothing out of place or that stands out as being a relic of a previous generation. The music in the game is one of its high points. Yoko Shimomura’s score, featuring variants on classic Disney themes in addition to original compositions, is great and really helps to identify with the Disney sections. The music is a bit recycled across the two games, but is unsurprising considering the reuse of locales and worlds in the game. The voice acting is identical to that of the PlayStation 2 releases. There’s no complaints about this for the first game, which includes a number of the original Disney voices and is solid throughout. However, the overall lack of it in Re:Chain outside of the new Organization storyline is part of what takes the damper off its Disney-based sections, particularly when following on the first game.

There’s certainly some stuff to like in Kingdom Hearts HD 1.5 ReMIX. The nostalgia present in the Disney worlds is a treat for all, and it’s easy to get attached to the cast. However, there’s very little about the gameplay that impresses, and those bits that do try and get away from the uninteresting battles are frequently interrupted or still have issues plaguing them. Virtually all parts of the gameplay can be found better done elsewhere, leaving the collection relying mostly on charm to get by, which isn’t quite enough to make it all feel particularly worthwhile, especially after it all gets diluted and reused. 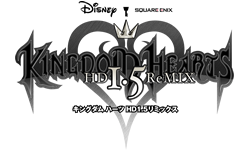