I Was a Teenage Exocolonist Review

How would humanity react if given carte blanche in a new solar system?  This is the question at the heart of Northway Games’ I Was a Teenage Exocolonist.  The game uses emotional gut punches around every corner to portray how the colonists don’t have it easy growing up, but they do have each other to explore various ways to spend their lives on an alien planet.  Complementing its narrative with a roguelite deck-builder helps build pieces to the overall puzzle, with each experience broadening their understanding of the world around them as key memories are obtained to make the journey easier by avoiding disasters of the past.  It’s a game that delightfully demonstrates the importance of connections, with each other or one’s surroundings, and of reaching out.

Players control one of the children born on the spacecraft Stratospheric, whose passengers are escaping an Earth that has grown inhospitable due to constant warring, political, and religious differences.  The adults of the colony want to start on a blank slate, communally raising children born with augmented DNA that lend to certain specialties, but giving the children the opportunity to make their own decisions as they grow after landing on an alien planet full of life.  The protagonist experiences ages ten through twenty on this planet as they decide how to contribute to the colony, while building friendships and even relationships with the others their age.  These children benefit from this interaction as they go down a predetermined path but the inclusion of another person they’re close with can give them a helpful push to being their best selves.

The game’s major story beats all make fantastic use of the relationships between the characters or their struggle to survive an unfamiliar world.  Touching moments come thick and fast as players grow with the colony and its people, and learning more about each character is a thought provoking experience about connections.  But it’s far from alien roses, as the first foray into the unknown is guaranteed to meet with at least some tragedy, and probably quite a lot of it.  I Was a Teenage Exocolonist builds the concept of multiple playthroughs right into its gameplay premise.  Players who have experienced events will get prompts and decisions to help bypass those disasters and events, as part of the game’s puzzle is figuring out how to use those other lives to make the current one better.  This encourages players to further their knowledge by exploring different ways to spend time and connect with the colony and its inhabitants. 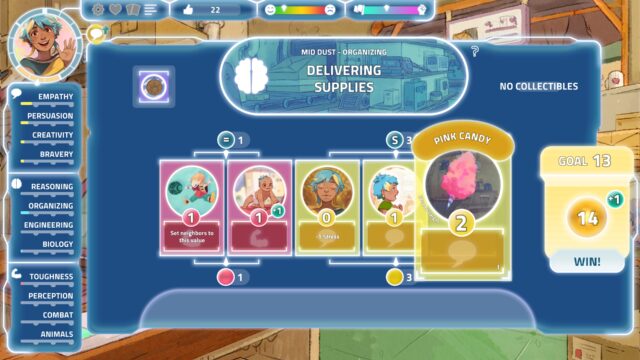 An example of playing cards to complete the task at hand.

The colony covers a small area around the Stratospheric’s landing spot and serves as the protagonist’s home.  Parts of the ship have beenretrofitted to provide various facilities, where players can gain skills doing relevant tasks.  These tasks include helping raise alien plants or creatures, sitting through an engineering lesson, or training in self-defence, to name a few.  With twenty-five possible jobs to be found around the colony, there is plenty to do and it is impossible to experience everything in a single playthrough.  The planet’s has a thirteen month calendar, with players focusing on their chosen task for that month.  Tasks add a small amount of stress to a meter, which slowly builds until the player needs to spend a month recharging.  Tasks always offer the reward of increases to specific skills related to the task, with some also granting new memory cards that are added to their decks, as well as Kudos, pseudo-currency used to buy certain items or upgrades.  Nearly task or event the player undertakes involves a card-based check to determine its success or failure.

Checks see players drawing a hand of cards, placing them in various ways to beat the listed score.  The checks consist one round of five cards, or three rounds that ramp from three to five cards, where the objective is to beat the listed score.   Each card has a numerical value and is colour coded to a skill group: yellow for social, blue for mental, and red for physical.  Some cards also have abilities that affect others; some may lower the values of another card group, or set neighbouring cards to match their total.  Organizing the cards in hand into straights or other groupings add vital bonuses, making it an interesting puzzle of maximizing the potential of the cards dealt.  Some will provide other restrictions or considerations, such as locking a card to a fixed position, or making a slot become a specific color.  The game offers some leniency through the option to push through using stress, if they have any available, or use consumables to improve cards or redraw the hand.  These card skill checks are breezy and fun, and there is a hard mode for those who want a tougher challenge, but it feels like a perfect refreshing counter to the often hard-hitting story. 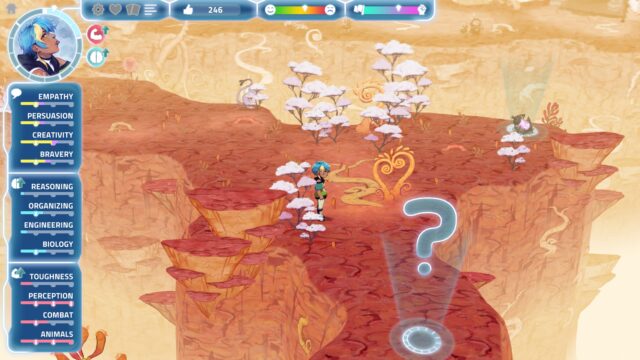 Exploring one of the locations outside the colony.

When players undertake a task success means the increase of skills for up to two of the games twelve skills divided into the social, mental, and physical groups.  These skills can unlock new tasks and actions, as well as new options on events and tasks.  I Was a Teenage Exocolonist encourages players make their protagonist well-rounded as the disasters that befall the colony cover multiple aspects, but there’s plenty of opportunity for players to max out specific skills in the later parts of the game.  This makes the game a series of balances, trying to figure out the best ways to grow to avoid the latest gut punch from happening.  The roguelite nature helps the game’s charming mystery as the protagonist is able to remember what happened in previous lives and when and where disasters will occur, but not every major event is marked by the colony, leading players to explore all available tasks to find them.

Players are not just confined to inside the colony.  Exploring the surrounding areas has its risks, but is vital to finding solutions to some of the colony’s problems on top of helping players gain skills and consumables, the latter of which are very useful for raising relationships as gifts. Every action taking while exploring adds to the player’s stress, so players will likely need to plan recovery time around it.  Players can choose to never leave the confines of their colony, but runs counter to the game’s themes of making connections and establishing oneself in a brand new world. 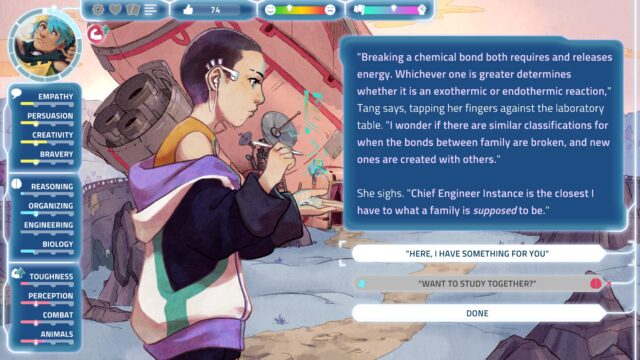 Tang having an existential crisis on what family is.

Players are given free range over their pronouns, and even specific terms of endearment, and their gender choices do not hinder relationship options with any of the other characters.  Players are able to determine how their relationships grow, with every deep friendship able to be extended to flirting and dating.  Connecting with these characters shows a different side to all of them than just being simple acquaintances.  Characters in the game do not fundamentally change their personalities, but their experiences clearly help define them and their growth.  Player choices can have major impacts on certain characters’ actions and partnerships.

I Was a Teenage Exocolonist showcases bright colours in the colony and around the planet to make the world feel alien.  These colours blend in very well with the hand-drawn backgrounds that playfully use this colour to accentuate the intricate designs in each situation.  Certain events and endings reward the player with unique artwork containing appreciable little details that work a treat.  Alien creatures share some base traits with Earth equivalents, but have their own original twists such as the floatcow, while others get some mythological comparisons or are just purely mystical.  Every area the player visits is accompanied by a synth heavy soundtrack that heightens situations with an otherworldly flair that simultaneously grounds everyone in a sci-fi adventure full of emotion.  In a game that features written word and sound to play with emotions, there’s only one vocal performance, but the song provides a profound touch in signifying how much has changed for the protagonist across game’s time-frame.

I Was a Teenage Exocolonist is a game of connections and using one’s heart, mind, and body to unlock their full potential.  As the children follow their paths to adulthood, the heavy hitting narrative tugs at the emotional heartstrings in different ways with each new experience.  The initial heartbreaks are met with investiture in subsequent playthroughs as regret and knowledge can prevent disasters that befell the colony on previous attempts.  Its roguelite nature works excellently and is immensely pleasing to reach a satisfying ending.  Add to the mix its simple yet addicting card mechanics and there’s a lot here to be excited for.