Hindsight 20/20: Wrath of the Raakshasa Review

Triple-I Games’ debut title, Hindsight 20/20: Wrath of the Raakshasa, is all about making choices. Putting players in the role of a would-be hero, the game successfully demonstrates that making the right choice is harder than what other stories may have made one believe. However, though it features an interesting approach to choice and consequence, the rest of the game doesn’t have the substance to support it, majorly diluting the impact of its choices and experience overall.

Hindsight 20/20 starts with the destruction of the city of Champaner through the activation of a weapon called the Triskati, created by the eponymous Raakshasa’s leader, Sinha. This act is the culmination of a conflict between Champaner — a city that ostensibly abhors the killing of others — and the Raakshasa, many of whom are former citizens of Champaner turned by a contagious condition that causes bloodlust. The game’s protagonist, Jehan, having been away from the city at its crucial moments after being disillusioned following his father’s death, prays fervently to go back in time so he can return to the city to try to prevent the calamity. 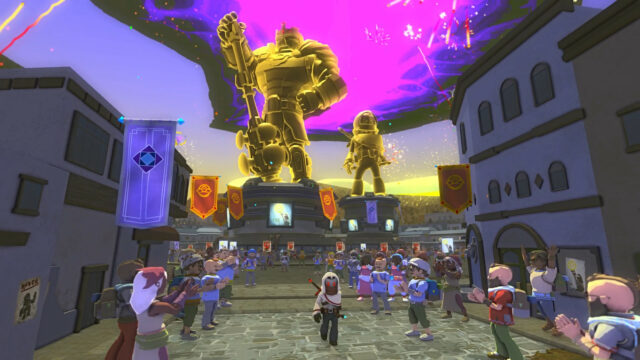 Earning such adoration is no guarantee of a good ending.

The game is all about making choices, seeing them play out, and then likely trying again for a different outcome. The first sequence sees players deciding whether to stop their friend — who has likely been infected and will turn into a Raakshasa — committing suicide or to get revenge on the protagonist’s father as they come across his killer. On top of regular conversation-based decisions, players also make an active choice in how they fight depending on which weapon they use. The red sword kills enemies, while the blue stun baton acts as the merciful option.

Hindsight 20/20 puts some consideration into showing how choice can lead to unintended consequences and goes out of its way to show that humanity’s nature isn’t as idealistic as many stories try to paint it. While he will be lauded for it throughout the game, choosing a fully merciful playthrough will absolutely come back to haunt Jehan. Playthroughs are short, lasting around five hours, which makes it fairly easy to go back through the game, and the ending sequences offer ideas for how Jehan might be able to go back and get a better outcome. However, the problem is playthroughs quickly become tiresome. 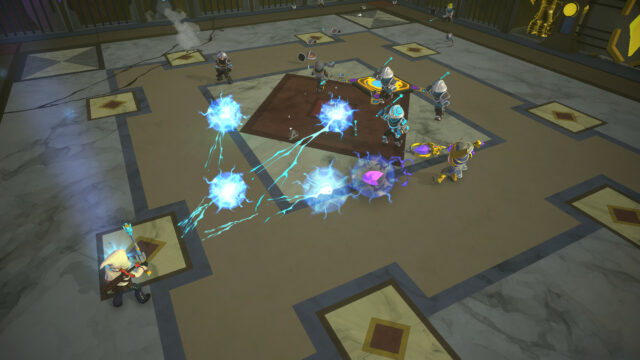 The real-time combat system primarily asks players to strike enemies with three-hit combos. For many battles, doing combos requires alternating the strikes between different enemies in the spawning groups. Against certain foes and in boss fights, players can only do three-hit combos in the brief windows when the enemy has been stunned or launched an attack. Going alongside the two weapons are two bars for the player and bosses. The red bar is the standard health bar, while the blue one indicates morale, and each are depleted by weapons or hazards of the corresponding colour, though Jehan is felled regardless of which one is depleted. There is almost no punishment for defeat, however, as players are simply dumped at a point just before with all progress retained. Players are able to use special attacks when they have picked up enough yellow Shakti dropped by enemies, but the game is balanced such that these aren’t at all necessary. As long as they keep dodging and doing combos, and retrying if needed, victory will come.

In between battles players will have to complete puzzles, largely consisting of linearly finding keys to open corresponding doors. The most complex of these are block puzzles, though even these are easy to figure out and are usually a case of finishing a partly-completed pattern. It’s just not all that interesting in the first place, and gets particularly tiring once players start on subsequent playthroughs where they are repeating many of the same areas. There are some very minor platforming elements, such as navigating through narrow passages and traps, but these are easily done just by taking one’s time. 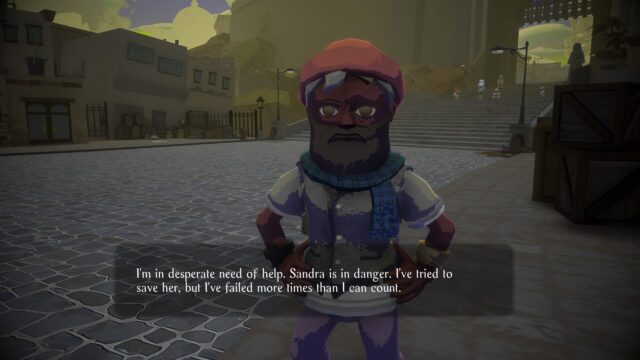 Choices have both immediate and later impacts.

The stylised visuals are fairly effective, but the world feels empty and disjointed, with nothing about it memorable outside of the premise. Players get to uncover a tiny bit of information about the Raakshasa and their condition, but nowhere near enough to be satisfied. It’s a flip side of the short individual playthrough time that though it’s interesting to see how the characters are impacted by Jehan’s decisions, there’s little to attach players to their relationships and outcomes. Voice acting is entirely absent, but neither does it feel like its inclusion is needed, while the music and sound effects are low-key and entirely forgettable.

Hindsight 20/20: Wrath of the Raakshasa has some fine ideas, and its approach to choice and consequences, as well as personal morals versus societal pressures, is a welcome and interesting one. Unfortunately, with sub-par gameplay and a shallow world, there’s not enough to it for players to be invested in those choices.