Last summer I picked up a lot of games, only to put them down again when something bigger or shinier came along. One title that I consistently picked back up again between the bigger items was Hero Bank, largely because the battles were fun. As such, the fact that it technically took me seven months to complete a twenty-to-thirty hour game should not be held against it. If anything, it reflects well on the experience outside of the plot.

Here’s the story: In the suburban area of Gappori, Japan, the newest big thing is the Hero Bank, which has its home office near the train station. The Hero Bank is the organizing body for the Hero Wars, a virtual online prize-fighting competition with heavy shades of American-style professional wrestling. The main event is coming up, with its grand prize of one hundred oku yen. As the Japanese number oku is a 1 with ten 0s after, that is big money indeed. The hero, Kaito, and his friends are determined to win the prize, and put in all the energy one might expect from a gang of hyperactive fifth-graders.

One of their number feels left in the shade, however, and his quiet resentment makes him a prime target for the mysterious Money Ghost, who intends to use the tournament to further his own plots against the Bank. The friend, rebranded under the pro-fighter name The Dominion Dollar, challenges Kaito to a match. It does not end well for Kaito. Afterwards, the only chance the young protagonist has to stay in the tournament is to accept a loan from the mercenary monk Zennen that will either set him up for life or leave him in perpetual insolvency. With this loan comes the virtual hero suit known as Enter-The-Gold, and from the moment Kaito accepts, his life is on a crash trajectory with adventure, revenge, and more money than a fifth-grader should ever be allowed to work with. 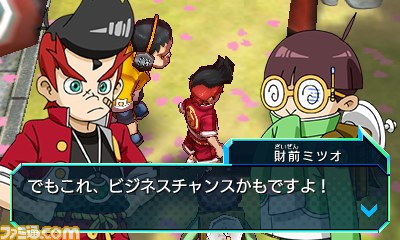 Everywhere an opportunity to cash in.

The love of money may be the root of all evil, but in Hero Bank currency fuels everything. Virtual armories and inventory are expensive to maintain, with prices through the digital roof, but the payouts for victory regularly end in the octuple digits. In battle, all attacks are fueled by the player’s liquid assets, with more being thrown to the floor of the ring by spectators in the form of coins and bills.

This game was produced by Toshihiro Nagoshi, as one of the few non-Yakuza games he has been involved with in the past decade, and while it is as different from that series as is humanly possible, Hero Bank definitely reflects his interests in both money and American pro wrestling. The battles are set in a wrestling ring with all the trappings. The player even starts each battle by ringing the bell. In combat, Kaito’s digital persona runs around grabbing as much cash as he can so he can let loose with the most powerful and expensive moves, but it’s also possible to do things like getting up onto one of the corner pillars to grandstand and play to the crowd. When an opponent is reduced to few enough hit points, they’ll fall over and give the player the chance to pin them for a three-count. Everything about the presentation screams kayfabe, the pro wrestling tradition of pretending the drama is real, except that in true anime fashion it’s all Extremely Serious Business at hand.

One last aspect of combat is the Gachinko, which is the Japanese equivalent to the pro wrestling term “shoot” or “straight shooting.” In the real world, this is a rare event when a wrestler breaks character to make a statement, start an actual fight, or otherwise go against the current narrative of the show. In Hero Bank it’s become more of a clash of wills, mano a mano, which triggers a touch screen mini-game, and it occurs at least once a battle. Whoever wins the mini game gets the chance to strike while their opponent is dazed, regardless of who was attacking or defending when it started. Some mini games are easier than others, but none are very complicated.

Both the mini games and combat in general rely on the use of the 3DS touchscreen with stylus, which may be more of an issue for some people than for others.  Outside of combat, the directional pad works just fine, though the stylus may be used to move Kaito around town. 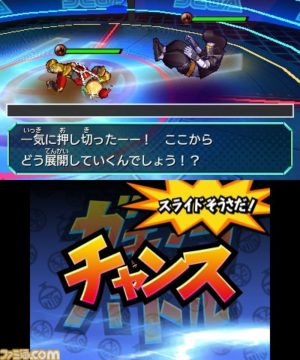 While Kaito’s signature fighting avatar is Enter-The-Gold, he won’t be using that heroic figure too much. Each digital avatar suit in the game comes with a stamina timer, representing wear and tear over the course of several fights. When the timer runs out, Kaito will be debilitated for as long as he wears that suit, with his stats reduced and occasionally even his ability to see the enemy threatened. There are several handy washing machines located throughout the game that will restore suits to pristine condition, but stamina remains a primary limiting factor in this game.

As Enter-The-Gold has a stamina timer of 50 seconds, the player will need to assemble a regular stable of other suits, both to manage the stamina issue and to better match against the game’s elemental alignment setup. It’s possible to rent costumes for the usual exorbitant prices, and on occasion Kaito will receive a rental for free after battle, but rental costumes cannot be cleaned to restore stamina the way that his regular suits can, nor can they be stored in the virtual closet for later use.

Eventually the player will have the option to assemble their own suits, provided they purchase the blueprints and then buy or scrounge the necessary parts: head, arms, body, legs. Even for the same type on the same suit, individual parts can vary wildly as to their stat bonuses or penalties, not to mention which attack ability they bring to the table. The player will need to consider whether taking a -5 penalty to all three stats is worth it to get a suit’s signature power attack, for example. Once the parts are acquired and ready for assembly, the player is treated to another mini game, this one involving the 3DS gyro controls. While it is again not too complicated, it can get annoying at the higher difficulties. But where there is a yen, there’s a way: the player can simply pay to skip the mini game while accepting a resulting quality that is not as good as what they might have achieved by themselves.

It is thankfully not too difficult to get the parts. While they are sold in the Hero Bank virtual store for the usual astronomical fees, the wide and endless variety of side-quests provides many opportunities to fight and reap rewards beyond the progression of the plot itself. First are the set quests, NPCs who appear in town with odd requests, quizzes, special challenge fights, or the occasional timed treasure hunt. Then there are the specific challenges on Kaito’s computer, most of which entail winning a certain number of battles under particular circumstances while wearing a specific suit. Finally, there is the never-ending series of challenge matches over Kaito’s phone, where he receives emails telling the place and the fight restrictions. 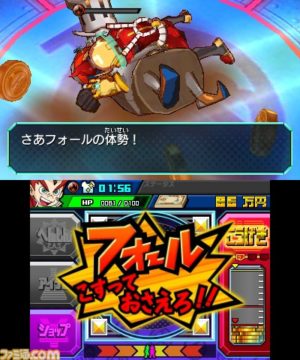 Down for the count.

Visually, every single detail of this game screams ‘shonen manga,’ louder than any ringside announcer. Everything is either a reference to money, to elementary school life, or to some outdated trope of 1980’s high school manga plots, and the game’s narrative plays this to the hilt. The voice acting goes along with the theme, with every VA chewing the scenery with their performances. The animated cut scenes lack subtitles, so the player will need to keep the sound on to catch what is being said during those. On the other hand, the very shonen-ness of the plot means that it’s rarely difficult to guess what’s going on from the animation.

One last odd thing to point out is that the logos for the ringside sponsors in-game are actual business logos, and not minor businesses, either.  Somehow Sega arranged corporate sponsorships with Coro-Coro Comics, Kentucky Fried Chicken, Pizza Hut, the Tokyo Police and Fire Departments, and a few other well-known Japanese companies, with the logos appearing in the background of every battle and with several hero suits sporting their corporate colors in plain sight.

Hero Bank is a textbook example of shonen manga philosophy. It has chosen its themes — in this case, money and pro wrestling — and then warped every possible aspect of the plot, setting, combat, etc., to somehow lead back into those themes. The unabashed acceptance of the ludicrousness this unleashes is a major charm point, and it cannot be denied that this is a game with heart. It’s light, adventurous, fun, and then takes a deep nose-dive into life-and-death issues at the ring of a bell. It reads like a love letter to the glory days of professional wrestling, while staying so perfectly Japanese that it practically demands some grounding in anime tropes to understand completely. So if I let the plot stall in the penultimate chapter for literally three and a half months, just so I could mess around with ogre housewife battle royale challenges or ninja soccer player shenanigans in the ring, it’s only because it was so much fun that I didn’t want it to end anytime soon. And that’s a pretty good commendation for a game to have.