RPGamers have long since become accustomed to long, epic quests to save the world, spanning dozens, if not hundreds of hours. We’re probably the only subset of gamers that labels any game less than thirty hours long “short.” This year, however, Marvelous scoffed at this idea. Thirty hours? Psh! We only need thirty seconds! And thus Half-Minute Hero was born, a truly bizarre RPG adventure where you have a mere thirty seconds to save the world.

Obviously, if the game were really only thirty seconds long, it wouldn’t be a particularly appealing game. Luckily, you’ll be saving the world more than once, taking on over one hundred different quests in four different game modes, thirty seconds at a time. Each of these modes has its own story to tell, focusing on one of four heroes that lived one hundred years apart. When put together, the entire adventure forms a single story that spans five hundred years. First, in Goddess Year 100, the intrepid and totally silent Hero must stop the evil Noire, chasing him across the world with the help of the vain and money-grubbing Time Goddess. One hundred years later, the beautiful, narcissistic Evil Lord sets out to remove the curse from his beloved and once again put a stop to Noire’s evil plans. Another century passes, and a Princess with a multiple personality disorder must search for a cure for her ailing father, the King. Finally, in the Goddess Year 500, the Time Goddess has been killed by Noire and monsters have overrun the world. The only hope is a mysterious Sage with the power to cast a spell of ultimate destruction. Protected by the slightly idiotic Knight, they set out to gather the power of past heroes and defeat the Ultimate Evil Lord.

Half-Minute Hero revels in its clichés, and its story holds up for this reason alone. There is a terrific feeling of satire in every line, and pop culture references and genre in-jokes pervade the text. The terrific 8-bit visuals only add to this, particularly the blown up, super-pixellated sprites. The entire game is an homage to the classic RPG formula that we’ve grown accustomed to over the years. Even the music has an 8-bit charm to it, but manages to avoid the tinny, ear-splitting quality of the old days, providing the perfect atmosphere for the wacky adventures that occur every thirty seconds.

The first of the four game modes is Hero 30, an action-RPG reminiscent of old Dragon Quest games. This mode also happens to be the longest and most enjoyable. In Hero 30, the Hero and Time Goddess set off on a journey across the world, defeating Evil Lords that are trying to cast the spell of destruction. The spell takes thirty seconds to cast, but luckily the Time Goddess is willing to turn back the clock for you, provided you have some money to give her. Each time she does it, though, her fee goes up. 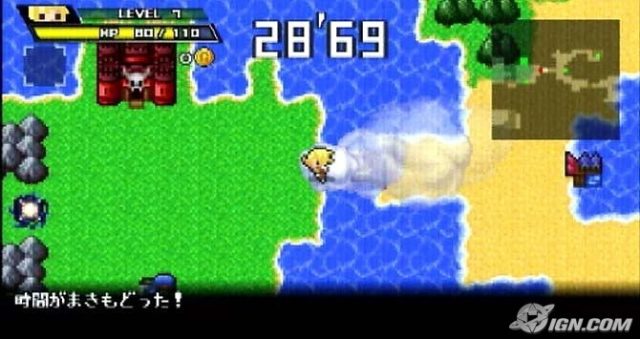 In each of Hero 30’s areas, there is usually a puzzle that needs to be solved. Hero must also gain enough experience to be strong enough to defeat the Evil Lord, and buying new equipment wouldn’t hurt either. Combat is pretty much automatic; when a random encounter occurs, the Hero bashes into the enemies automatically until they die. By holding circle, he can perform a dash attack at the cost of a bit of health, and he can also purchase herbs to restore health in mid-battle, but aside from this, it’s pretty much hands off. The real foe is the clock, and players will have to watch it carefully, making sure they have enough time to get back to a goddess statue so they can turn back time and keep going.

Each of the levels is brilliantly crafted, and many have multiple ways to beat them. In several, beating them in different ways will put the Hero on a different path towards the end. While only thirty levels need to be beaten in order to finish this mode, there are actually fifty in the game waiting to be discovered. Equipment found in each level can be used in subsequent levels, providing the only permanent sense of progression in this mode.

Evil Lord 30, Half-Minute Hero‘s second game mode, is a real-time strategy game. Evil Lord’s beloved Millenia has been turned into a bat and can’t stand sunlight, so he must complete his tasks before sunrise, which happens in thirty seconds. Evil Lord is able to summon three types of monsters, shooters, nimbles, and brutes, which have a rock-paper-scissors relationship with the enemies in each map. Evil Lord also has a mana pool represented by a large rune surrounding him. Depending on how filled the rune is, the monsters summoned will become more powerful. However, every time he is struck by an enemy, his maximum mana is reduced. Luckily, the Time Goddess appears again to save the day. For the cost of all the precious coins Evil Lord has collected, she will not only reset the timer, but restore his maximum mana to full. This mode takes some getting used to at first, but once you get the hang of it, it’s also the easiest and fastest of the four modes to complete.

Mixing things up further, Princess 30 sees the Princess, wielding a gigantic crossbow almost as large as she is, being carried into battle by a loyal army of soldiers. She has a curfew, though, and must return to the castle within thirty seconds. This mode is a shooting game, and the soldiers zip across the landscape automatically while Princess blasts enemies with rapid-fire crossbow bolts. Whenever the group is struck, some of the soldiers fall off. When only two remain, Princess becomes stunned, unable to fire until reinforcements arrive. To top things off, when she returns to the castle, she must pay for the fallen soldiers’ medical bills. The Time Goddess makes another appearance in this mode, providing a magical carpet that will automatically trade coins for seconds as long as the soldiers are running along it. Of the four modes, I found Princess 30 to be the most challenging. 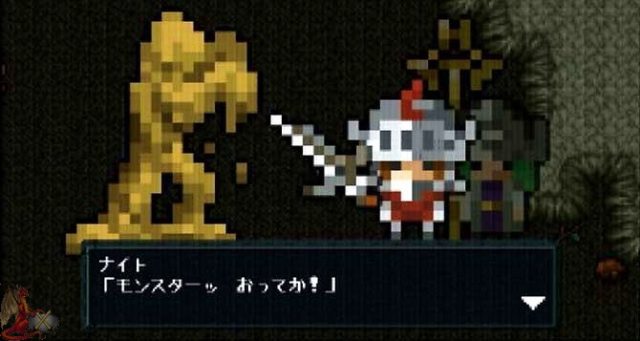 Knight will protect the Sage even if it costs him his life several times.

Finally, Knight 30 unlocks once the previous three modes have been completed. In this mode, the Time Goddess has been killed, and the only one left with the power to stop the Ultimate Evil Lord is a mysterious Sage. Knight is a fallen soldier who is revived by the Sage and is tasked with protecting her for thirty seconds so she can cast her spell. While the game describes this mode as a fast-paced action game, the reality is that it’s more of an escort mission. Enemies in this mode cannot be killed, only stunned, so the main goal is to get the Sage to a safe place so that she can finish casting her spell. If Knight dies during this mode, his ghost merely needs to run back to the Sage and he will be resurrected, so he can’t really be killed either, leveling the playing field a bit. Knight can make use of items, weapons, and traps laying around the area to fend off the monsters, and he can also grab the Sage’s hand and lead her to safety. However, as long as the Sage is moving, she cannot cast her spell, making finding a safe spot to stop the main goal of the game. Of all the modes, I found Knight 30 to be the least fun to play. Many of the missions require almost no strategy or effort at all, and due to the nature of the mode, much of each mission is spent simply standing around waiting for the Sage to finish casting her spell.

When all four modes are completed, the game’s finale becomes available: Hero 300. This game mode is identical to Hero 30, except that there is only one map, you have three hundred seconds rather than thirty, and the timer cannot be reset. For those wanting an even more insane challenge, an optional mode becomes available upon completing the game, entitled Hero 3. I’ll leave that one to your imagination.

The very fact that Half-Minute Hero exists is a shining example of the creativity that still exists in Japan. Much like early 2009’s Retro Game Challenge, Half-Minute Hero is a tribute to days gone by, taking what was imagined back then and giving it a modern twist. Although the game can be completed in less than fifteen hours, they’re a terrific fifteen hours, and the addition of ranks and hidden titles for achieving certain times and performing certain actions gives it plenty of replayability for those who want to try to get “hi-scores.” It’s also a terrific portable game, as each level takes only a few minutes to complete at the very most. Even on a fifteen-minute coffee break, you could easily finish two or three levels, and with four different game modes to choose from, you shouldn’t get bored either. Half-Minute Hero is a terrific game, and PSP owners would be remiss to pass it up.