Into the Breach Once More

In a year filled with an incredible number of tactical RPG titles, one would expect the sub-genre to be overcrowded. Howeverthe multi-console Gladius comes to the forefront making an interesting, if quiet impression among the pack. In the game’s quasi-Roman world, a ragtag school of gladiators turns a fairly standard quest into an interesting and challenging contest. This is Gladius‘ strongest point: it actually challenges RPGamers to use a consistent amount of strategy in battles, effectively negating the simplistic effects of power-leveling in most cases.

Level-matching has been used in other titles in the past to varying degrees of success, but few games have implemented the feature as well as Gladius has. Much of this has to do with the way battles are conducted in the game. Players have the choice of playing one of two heroes, and they build a school of gladiators from varying classes. These classes are split up into several different categories, such as light, heavy, and support. The party must progress through a series of league battles in each town to gain the entry requirements needed for a spot in the local tournament. 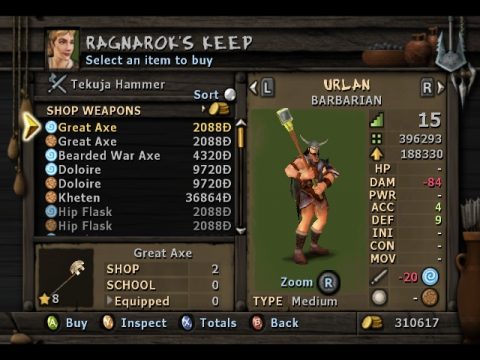 What else but an axe for a barabarian?

This isn’t to say that all battles need to beaten to progress to the tournaments. In many cases, conquering every single league battle in a town is impossible, thanks to some difficult class requirements (e.g. all channelers, beasts only). Not all are restricted to standard battles, either. Several different types of contests show up throughout the game. These scenarios vary from King of the Hill to Points battles (where the team that inflicts the most damage under a certain time limit wins).

Every warrior needs to be equipped, and the shops in Gladius offer a respectable array of weapons, armor, and accessories to choose from. In addition to the standard stat bonuses that the equipment provides, elemental affinity is also taken into account for both offensive and defensive abilities. The higher a character’s affinity rating, the easier it can either gather affinity charges from opponents or absorb elemental blows from them. Some of the game’s shopkeepers serve as the town gossip, and as such provide random sidequests with some nice benefits. Despite all of this, the most important factor in character development comes with their individual skills. 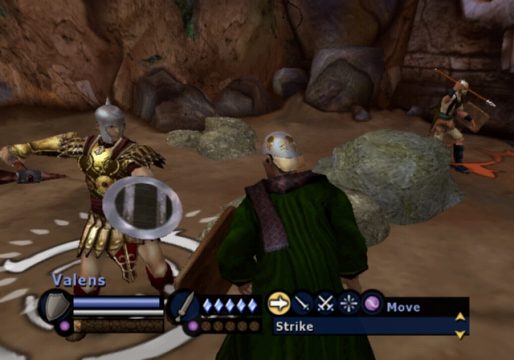 All skills are bought with Job Points, which are gained after a character levels. What skill a character receives varies depending on its job class, although many skills are shared between the different professions. However, these skills often make the difference in battle, where a gladiator can easily overcome a similarly built foe simply by having a shrewdly picked skill set.

As expected of a gladitorial-based game, battles take place in the multitude of arenas throughout Gladius‘ world. From the Coliseum-like setup of Caltha to the volcanic wastes of Exuro’s Eye, each map differs in terms of size and height modifiers, where gladiators stuck in a pit are at a severe disadvantage against their foes. One of the most unique aspects of battles is the crowd meter, which rises or falls depending on the team’s performance. Especially devastating attacks are rewarded with a small scene of the local nobleman or guest of honor who heartily voices his approval, followed by a substantial rise in the meter. While this may seem like a merely cosmetic feature, certain notches give status boosts to the entire party, and also help increase the team’s popularity rating throughout the city.

All of the features in Gladius‘ intricate battle system underlie the fact that it is based around a standard fantasy plot, albeit in a somewhat familiar historical setting. RPGamers can choose to play as either Valens or Ursula, and they go out on a quest to compete in the High Tournaments of Caltha, capital of Imperia. Throw in a diabolical plot to take over the world and you have the basic gist of Gladius‘ plot. It’s decidedly standard fare, although it is serviceable considering it provides a reasonable explanation for all of the game’s battles. Valens’ quest is a little more difficult then Ursula’s, if only for the fact that some of the required battles have more specific class requirements, but the two plots overlap. 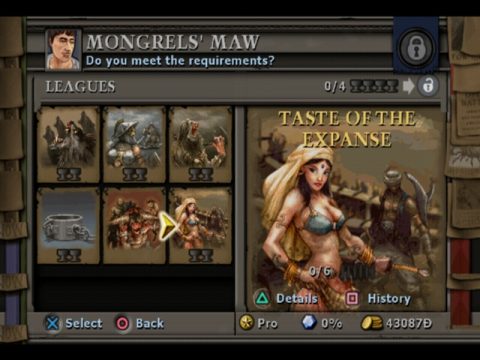 Side benefits of league competition.

With the majority of the game spent in arena battles, it’s little to no surprise that the occasional battle cries of the characters get annoying rather quickly. While the music isn’t as repetitive, the PlayStation 2 version of the game occasionally suffered from split tracks, a problem that should have been identified before its release. Fortunately, the music’s presence as background filler helps to null this effect.

Graphical quality varies, although Gladius is helped slightly in this regard with its multi-console release. The PS2 version would occasionally flicker with some of the ultimate summons, although compared to the jarring frame rates of Final Fantasy Tactics‘ similar attacks, it is a minor problem. Character models look great in battle, but the birds-eye perspective shown in the game’s world map looks rather unrealistic, and almost too much so despite the focus on the battles.

No one will doubt the fact that this year has been an extremely difficult one in terms of competition in the TRPG market. Had this game been released prior to E3, Gladius would have stood heads above the competition. Even so, the game is a nice addition to any TRPG enthusiast’s collection, and is worth at least a rent, if not a buy.