A Fantasy to Remember

Final Fantasy XV is bound to be a divisive title, especially when many people are going to bring a lot of the game’s prior development baggage along with their experience. Thankfully, I was happy to come into this one without having any real preconceived notions of what I wanted out of it. That said, Final Fantasy XV offered a lot of surprises, some good, some bad. As you make progress, it eventually feels like you’re playing through two different games merged into one. Some will be more forgiving than others, though it never ruined the experience for me.

The first thing of note with Final Fantasy XV is that the open world is such a major part of the experience. While the MMOs, and even FFXII to an extent, tried things like this, FFXV is the first title in the series to truly embrace this idea, and it works fairly well. Much like other open world RPGs, it’s easy to get swept up in completing every side quest, exploring new areas, and hunting down all the wanted monsters. It wouldn’t be surprising for many gamers to get caught up in this for hours and do little to progress the main story, because there’s a lot to dive into here. Most of the quests do little to provide much narrative content, but that’s not all bad because they tend to be pretty easy and offer lots of experience points and cash to help bankroll the adventure.

Questing does tend to take up a lot of time, because fast travel isn’t really as convenient as it should be. Players get a car which serves as a main mode of transportation throughout the world. When in the car, players can select to drive to a quest location, a specific map point, or a noted stop along the map. Sometimes there will be an option to fast travel for a minimal 10 gil, which saves on travel time. Other times players will get to watch as the party traverses the map in the car, which sometimes can be frustrating if in a hurry, but offers a lot of party interactions and the option to listen to music from prior Final Fantasy games, which is never a bad thing. Along with car travel, players can also quickly return to the last area where the party rested. A useful feature, but being able to quickly return to any prior area would have been handier, especially since loading times can be super long.

Combat is one area that starts off a little shaky, but once more options open up then battle becomes more enjoyable. Noctis is the only fully controllable character, though players can unlock special skills for Prompto, Gladiolus, and Ignis to be used in battle along with other more passive abilities. Since he is the main character, Noctis gets all the powerful skills, can equip any weapon, and will control the pace of combat. He gets four weapons to swap between in mid-battle and can perform a warp strike where he teleports from wherever he is to attack the selected enemy. From there, it’s simply a matter of finding the opponent’s weakness and exploiting it. 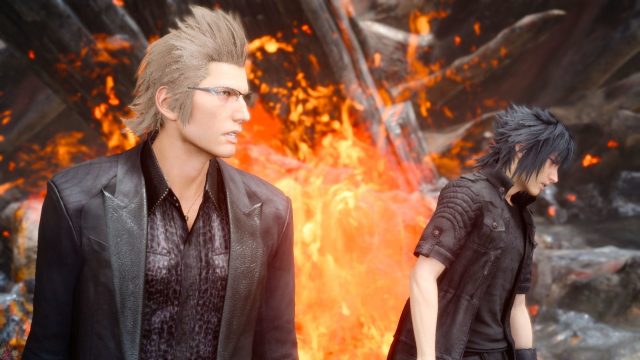 To find an enemy’s vulnerability, players can use the Libra skill to detect what foes are susceptible to, which is made easy to do in wait mode. Wait mode pauses all combat and allows players to select options without the chaos of being assaulted at the same time. It helps because battles can be chaotic. Fighting a small number of enemies is usually fairly manageable, but there are often times when the party will encounter a group only to then have another set overlap with them. FFXV does not shy away from dropping a squad of Magitek Troopers on the party mid-battle, making things much crazier to manage. Having tons of foes to tackle at once is harder to handle, and often if players are in an area with foliage, trees, and bushes will screw with the camera making it difficult to focus. Thankfully, it is usually pretty easy to escape these overwhelming battles and return to take them down on better terms.

Final Fantasy XV also features a day/night cycle in which certain enemies will only be available during one time or another. Often this is useful for hunts in which players are after a certain monster for a quest, but during regular exploration this can be a problem since much tougher enemies show up after nightfall. It makes walking across the map or even driving a problem, so it’s usually wise to avoid. There are also certain quests that require it to be a certain time of day and there’s no good option available to jump from day to night other than resting.

Resting is a key feature in FFXV, as that’s where leveling up occurs. All experience gathering from killing foes or completing quests is banked until the player chooses to rest. The party can choose to stay at a campground, which will allow Ignis to cook food that will boost stats for a while, or they can stay at lodgings where there are no cooking options, but experience points get a multiplier applied.

Another highlight of FFXV is the boss encounters, as these are some of the most epic points in the game. Players will often be taking on massive fiends in multi-stage fights that will require different strategies for each part. They are used sparingly enough to be special and really stand out as great moments, from the early chapters all the way through to the final encounters. These are great, memorable battles that I would love to play through and take on again.

There are only four party members, and though there are some great guest characters, the main focus is around Noctis, Prompto, Gladiolus, and Ignis. While some might initially be put off by only having a small, set party, the character development that takes place between them through their interactions is just fantastic. By the end, the struggles these four have gone through have cemented a foundational relationship rarely seen in RPGs. This isn’t a story about four guys cruising around the world like a boy band, they are truly bonding and players get to bear witness to this development throughout. There are some powerful moments where the characters have trials that must be overcome, but there are also simple, quiet scenes where Noctis and one of his companions have a one-on-one conversation about things that friends would chat about. It’s easy to get to know the party and feel what they are going through. 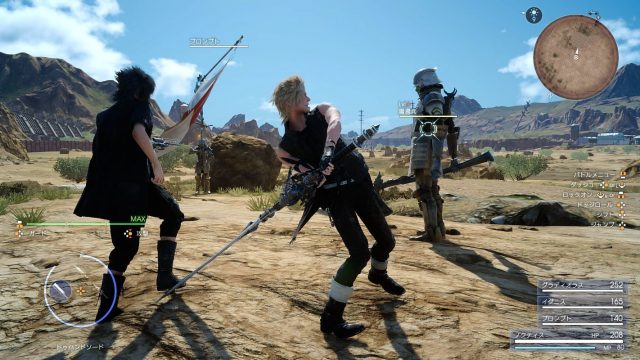 That said, the other side characters don’t get near the development that they should. Some are rarely seen and are still expected to have a meaningful impact on the story. The cross media additions such as the CG movie Kingsglaive do a lot to fill in some of the backstory about what the empire did to Prince Noctis’s land of Insomnia, a piece of story that is only briefly detailed in an early game chapter, but many others aren’t developed as much as would be appreciated. While not super critical, it does feel like part of the game is missing because of this. Some characters get a little exposition here and there, but then are cut off and never seen again. One exception to that is the mysterious character Ardyn, who does a great job of being creepy and helpful at the same time. His development is spot on and makes for some great moments.

As FFXV progresses into the later chapters, there is more of a divide in the title’s structure. The open world content is never taken away, but is not exactly the focus and only made accessible through a weird time travel feature that seems like it was shoehorned in as a way for players to keep going in the main story and still be able to return to the open world areas. The later chapters have a more linear focus and vary greatly from the earlier parts. Some of this, one chapter specifically, shakes things up a great deal and could easily turn some off as it takes away large parts of the battle system that most have been relying on throughout. It was annoying to get through, but the story aspects of it made it worth the struggle. There’s still some disconnect between the gameplay in these later chapters and the early parts, but thankfully the story holds it up throughout these.

At the end of the day, Final Fantasy XV is a great experience that could have been better in some places, but exceeded expectations in others. The soundtrack might be limited, but is great when it hits and is supplemented by tons of past Final Fantasy hits as well as wonderful voice acting. The visuals are outstanding throughout. Boss battles are sparingly used, but are fantastic when they occur. Character interactions between Noctis and his buddies are nailed perfectly, though the rest of the cast is a little on the light side of development. The open world segments are as addictive as ever for those who enjoy side quests. The split in the second half didn’t really bother me outside of one chapter, but even then it was over quick enough to not sour the experience. Issues aside, I truly enjoyed my time with Final Fantasy XV. It hit the right notes often enough to be a memorable experience that is still worth playing even after the credits roll.