Not all Final Fantasy titles are created equal, but there is nothing wrong with that. It’s almost unfair to compare one title in the series to another, because one man’s trash is another man’s treasure. All the main series games are different in their own right, and Final Fantasy XIII is no exception. The biggest difference when looking at Final Fantasy XIII is that this title is like two separate games: one quite poor and the other fairly enjoyable. Never have I played a game that felt so bipolar. At times I loved parts; other areas I felt were completely hollow. The game ended up leaving me in the middle of the road, because for every step the game took forward, it took one back.

For better or worse, story is a key aspect to many in RPGs. In Final Fantasy XIII, the player follows the quest of a small group of outcasts as they travel around the world of Cocoon and beyond in order seek to uncover the truth behind their mission. These individuals have been cursed with a brand that labels them as Pulse l’Cie, feared people who have been tainted by the godlike Fal’cie of Pulse. The worlds of Cocoon and Pulse are hated enemies, and the populace blindly accepts this hatred without question. This fear causes the party many problems as they progress through the world seeking the meaning behind their Focus, the vague mission they were given upon being cursed. Lightning has clearly been given top billing as the lead character of Final Fantasy XIII, but she is far from the main one. All six party members get a decent amount of screen time, though the focus is generally on the task at hand. The times when players get a glimpse at backstory helps to further develop the each member, but sadly these are too few and fall off altogether as the game wears on.

The problem with the overall plot is not that it’s horrible; it’s that it is poorly delivered. The game offers bits and pieces of dialogue during breaks between combat sections, but most don’t last very long or go into too much detail. Only the six main party members really receive any development, but that’s only after the player spends over forty hours with them. Even then, there are still sections of the plot that feel forced and unfinished. The antagonists are very poorly established and get so little screen time players will have a hard time getting to know them. Many ancillary characters are met for only a few brief moments, but the party often has a strong reaction when something happens to them, which will leave players puzzled as to why a character met five minutes ago created such an emotional response. Lots of events in the story feel like a stretch, as if there were scenes that would have helped build a more believable foundation behind what actually happens, but were cut without working in a new transition. For every moment the plot of Final Fantasy XIII starts to shine, it is cut short and not explained well enough to care about. 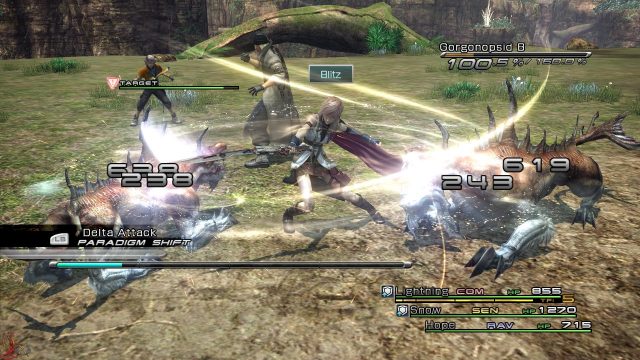 You will be surrounded by enemies all the time.

Considering the numerous failings with the story, it’s almost a good thing that the vast majority of Final Fantasy XIII is focused around combat. The game features chaotic, fast-paced battles, which only get better as the game goes on. Enemies are encountered on-screen, and if players are lucky enough to sneak up on an enemy before they are seen, they will gain a preemptive strike which grants a bonus in combat. In battle, each enemy has a stagger meter. Its level varies by enemy, but its usage is always the same. Players want to attack in order to fill up the meter to a stagger point, which when reached will mean the enemy takes much greater damage than normal. Magic spells help to greatly increase the stagger bar while melee attacks and debuffs are used to keep the bar from dropping quickly. The majority of combat is spent finding the most efficient method of staggering enemies in order to defeat them.

Despite what the description might imply, combat isn’t just bland, mind-numbing attack spamming. Each of the game’s party members have three main combat roles available. These roles include the Commando, the melee powerhouse; Ravager, the magical attacker; Medic, the defacto healer; Synergist, a role used to buff the party; Saboteur, an enemy debuffer; and Sentinel, the defensive role. While the characters can swap between these roles on the fly, their role configuration has to be set before combat via a paradigm. Players are limited to a set of six paradigms, so creating the right combination for the situation might take some trial and error of mixing and matching characters and their roles. However, about all the player will be doing is swapping paradigms, as non-leader characters cannot be controlled directly. Thankfully, the AI is fairly resourceful for the most part, but there are still plenty of times that it would have been helpful to have more control. A nice feature that helps make this less of a problem is that if a battle isn’t going well, the player can reset combat without a penalty, starting over before the enemy was even engaged. The same reset option is available if the party leader falls in battle causing a game over. This kind of progressive option is one of the title’s saving graces. Characters being restored to full health after each battle is also a nice addition, though it’s more of a necessity due to how draining an individual battle can be. While battles can be challenging, Final Fantasy XIII is very forgiving making it far from difficult to progress.

Considering how much of the game is spent in combat, it’s a good thing the battle system is enjoyable. It’s just a shame that other aspects of the game keep it from being a great experience. The game’s biggest failing is its pacing. During the first half of the game, players have very little choice as to what they can do. Party configurations and leaders are chosen for the player, limiting who can be used, even when there is no reason not to be able to swap in other characters. It even takes nearly five hours for players to have access to the Crystarium, the game’s progression system. Twenty-five hours or so in when the player is finally given full control, things get much better. Combat turns from the limited shell it once was into a fully open experience, and battles are very satisfying. Unfortunately, it still doesn’t offer enough variety. 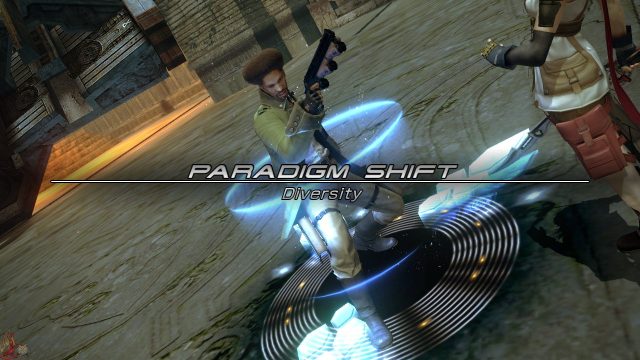 Many reviews have complained about a lack of towns and mini-games, but it’s not the lack of those features that creates the chinks in Final Fantasy XIII‘s armor. It’s the lack of anything to do besides engaging in combat. Sure, lots of RPGs fail at the “something else” factor and merely fill the dead space with meaningless fetch quests or pointless NPCs, but most of the times those are optional. Final Fantasy XIII doesn’t even pretend to offer any kind of other options; it shuns them in favor of more combat. Hunting marks is fun for a while, but it’s just more combat. Crafting weapons also gives a little more to do, but even that requires more fighting, as enemies don’t drop money, just parts to sell or use in upgrading. Unfortunately, the weapon enhancement system leaves a lot to be desired. In order to upgrade a weapon or accessory, players must pump experience into it. First, players have to use cheaper upgrade items that give minimal experience to boost the gain rate and then use higher quality items to actually see a significant boost in the number of points given. It’s a pointlessly cumbersome system that just serves as a means to fight more battles. As good as the combat can be, the game leaves those looking for an occasional break out in the cold.

Whatever complaints may be leveled against it, it’s hard to knock Final Fantasy XIII for its presentation. Even the most jaded RPGamer would be hard pressed to complain about this game’s visual prowess. The world is beautiful and the animation of most everything is spectacular. While the visuals sometime cross into the area of style over substance, most of the cutscenes offered here are simply jaw-dropping. The sound quality is not as fantastic as the visuals, but is more than sufficient. For the first time ever, composer Uematsu is nowhere to be found, not even touching the main theme. In his place is Masashi Hamauzu, who does a solid job with the soundtrack, even for those who might not be a fan of his prior work. While not every track is a hit and listening to the music outside the game isn’t memorable, within it everything fits together naturally. The voice acting is rough early on, but becomes less of a problem as the game continues. Overall, this title presents itself very well.

Final Fantasy XIII comes up short on story-telling, but counteracts those failings with speedy and engaging combat. It is poorly paced and stubbornly keeps the player’s choices limited for too long. When it finally does open up, it blows the lid off the combat system, but offers little new in terms of content. What this game lacks in substance, it tries to make up for with style and solid gameplay. Final Fantasy XIII eventually boasts a wonderful battle system that is very addictive and forgiving, especially since players will never have to backtrack upon seeing a game over screen. While the first half of Final Fantasy XIII feels like a hollow shell, the second half does more to make the game more enjoyable, but still somewhat stalls in a few areas. Final Fantasy XIII is not a great game all the way through, but it has its moments of brilliance. Sadly, those moments are often marred by the game’s self-imposed limitations and half-finished feeling. At the end of the day, I’m glad I played the second half of Final Fantasy XIII for the battle system alone; I just wish I didn’t have to get through its hollow layer to get to the chocolate.