Six years after Final Fantasy XIII was unleashed outside Japan, the game’s reputation is less adoring than the initial reactions displayed. Final Fantasy XIII became its own sub-series, and even by the divisive standards of most major Square Enix releases, this one has managed to polarize gamers. My reaction after playing the thing is one of boredom mixed with irritation, and the shabby PC version of XIII did not help me at all. While I wouldn’t call this the worst main Final Fantasy, it’s nowhere close to the best.

XIII‘s narrative involves several characters seeking, for a multitude of reasons, to stop a Purge from the land of Cocoon. This nation is suspended in the air and provided for by the fal’Cie, inhuman creatures that can bestow superhuman powers onto people with the cost of needing to complete a very vague objective known as a Focus. Failing to complete this inscrutable task results in the chosen turning into mindless inhuman things, while succeeding results in crystallization. All the protagonists of XIII shortly find themselves given a Focus that they must puzzle out before their time is up, and even if their purpose was peaceful, the longstanding policy of Cocoon is to expel all afflicted from the country via any means necessary.

Narratively XIII is a mess for a variety of reasons. Its structure is convoluted and repetitive, dumping lengthy flashbacks onto the player for a very long time and repeating the same concepts far too often when events take place in the present. The characters are somewhat interesting at first but don’t develop very much. Rather than including fascinating facts about Cocoon and the lower world’s origins in the narrative, an in-game version of Wikipedia constantly updates to flesh out the material via text dumps. All this world expansion through text wouldn’t be an issue if the cutscenes were more interesting, but opportunities to showcase more of the world and its inhabitants are constantly squandered in favor of banalities among the sextet of protagonists. Many cutscenes feature impressive eye candy, but rely upon Hollywood action movie logic and thus make no sense under close examination. Square Enix did turn in a very strong localization, but it could not compensate for the rotten original script.

Fighting in FFXIII is a different animal from what came before in the series. Upon colliding with the visible enemies, up to three characters start slugging it out with them. Only the party leader is under player control, while the others do whatever abilities fall under a certain class description. The player can switch between these classes with a Paradigm Shift at any time during the fight, and doing so is critical to staying alive since characters cannot use any technique not part of the current job’s lineup. This means that healing can only be accomplished by changing a character to that class, then switching back if the healer needs to do something else. A critical component is Staggering the enemy, accomplished by hitting it repeatedly with strikes to which it is weak. Once Staggered an enemy will take greater damage and is easier to prevent from doing anything. 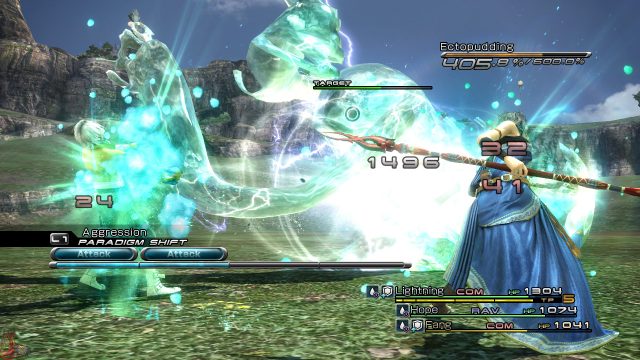 The first few hours of the game’s combat are a waste, since no option other than straight attacking is available and there are no rewards for slaying the foes at this point. Once the characters are given a means of becoming stronger along with access to more abilities, things become somewhat more interesting. FFXIII‘s wretched pacing still keeps many important aspects of combat unavailable until over twenty hours have passed, something extremely hard to placidly accept. Once everything is available and the player can choose a party instead of having the game provide one with no options, certain enemies that take a long time to kill start being thrown into the path. Some of the abilities available in combat are interesting, such as borrowing Grandia III‘s notion of launching opponents into the air, but the player rarely has any control over how these things are activated.

Certain fights can be difficult, but the ability to retry from just before the encounter’s start eliminates the possibility of losing progress. More problematic is how repetitious XIII becomes when enemies take a long time to kill. Getting a preemptive strike makes all opponents almost completely staggered at the beginning of a fight, but XIII is very loath to let this happen often. It also likes to place foes in positions where they cannot be avoided, and this makes the later game far more tedious than necessary when running is not an option, while the early game is tedious because of all the systems not yet available along with fighting the same opponents constantly.

Linearity is a well known hallmark of Final Fantasy XIII, and running along narrow corridors with no opportunity to do anything else is not inherently a negative. It does mean that paying attention to the area map is more useful than looking at the landscape, because what appear to be extra bits of navigable land to venture onto are usually nothing more than a tease from the graphics department. The protagonist automatically bounds around the environment without the player needing to do a thing whenever the path is not flat, and moments when something demands interaction not in the form of a fight are rare indeed. Late in the game a location which is not a straight line will be found, but XIII‘s designers made even this more obnoxious than necessary by respawning enemies after they are slain much faster here.

FFXIII‘s linearity would not be such an issue if the game featured anything other than fighting to do, but the occasional instances of other activity always disappear with great speed. In chapter 11 the single side quest of the game appears, wherein the player gets to hunt down monsters. This task is surprisingly irksome given that only one hunt can be taken on at a time, and the bequeathers of the mark are often a long way from the quarry. Otherwise there is nothing to do but plod down the path getting into more boring fights until the finale at somewhere past forty hours. 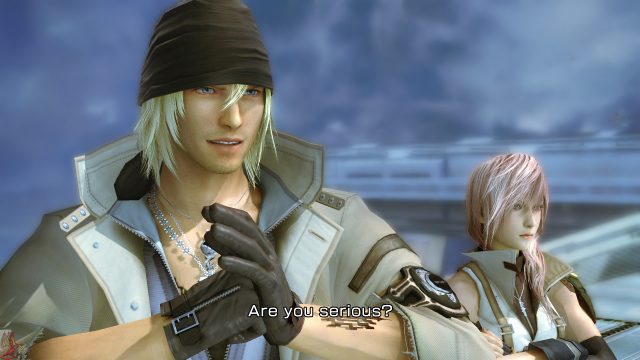 Yes! Wait, no! Maybe? Could you repeat the question?

XIII‘s character and equipment advancement systems are incredibly time-consuming and irritating. Once character growth is unlocked in the narrative, the player gets to deal with something resembling Final Fantasy X‘s sphere grid dumbed down. Every character’s improvement happens along set lines for each class type in combat, using a straight line with occasional branches that always dead end after just a few choices, forcing the player back onto the one and only path. The game also has the gall to keep unlocking new areas for development after certain story beats, meaning that there is no way to become any better than the developers allow before hitting a temporary wall — making the last upgrades possible only after beating the game is particularly infuriating. As for equipment, it is upgraded using a very lengthy process of feeding component parts onto the base. Since placing a large number is more efficient than piecemeal improvement, the game’s refusal to say what an item’s maximum level can be prior to irreversibly sinking materials into the thing is disgruntling.

One thing Square Enix’s top releases can count on is a lot of graphic designers working hard, and XIII is no exception. Visuals throughout the game are impressive to behold, and make the game a feast for the eyes. Some of the enemy designs were clearly not given full priority, given that palette swapping is alive and well throughout Final Fantasy XIII. Its PC incarnation also needed a lot more fine-tuning, as the frame rate can drop to abysmal levels concurrent with horrendous lag. When visuals lag five to ten seconds behind the audio intended to accompany them for some scenes, there is definitely a problem.

Masashi Hamauzu gets credit for the music here, and most of it is a worthy effort. Some tracks that are intended to be background material fail to be memorable, but most of the music offered is entertaining and worthy of being heard. Square Enix’s localization turned in a top-notch effort for the voicework, something even more impressive when the relative proximity of its Japanese release is considered. Most of the battle quotes are overplayed, but that is the only real issue with the voices heard.

Six years later, Final Fantasy XIII is the most recent main offline entry in the series to see release. The game definitely has fans, but I am not among them. Incessantly fighting the same enemies isn’t necessarily a bad thing, but this game did nothing to convince me that I needed to accept its implicit invitation to dive back in after the credits so I could slay the toughest Hunt critters. Instead I let the long credits roll signal the end of me ever touching this game again.