At the time of its making, Final Fantasy X-2 represented a break from the tradition of never developing a direct sequel within the series. In the years since, it has become abundantly obvious that Square Enix has no problem with maximizing the brand-name recognition inherent to certain installments of the Final Fantasy series. In that sense, X-2 represents a harbinger of the future, and a diminishing interest in originality from what was once Squaresoft. Even more than its importance as a change of direction for the company, X-2 demonstrates that surrounding interesting combat with nonstop annoyance is not a winning formula for any RPG.

Two years after Sin’s destruction, Spira is undergoing an existential crisis in which its inhabitants grapple with the undoing of a centuries-long status quo. Yuna and Rikku return from X with their new pal Paine in the role of Sphere hunters, combing the hinterlands of the world in search of rare and valuable recordings from earlier eras. Displaying a more mercenary mentality than she did in X, Yuna will also undertake missions for NPCs around the globe in return for some means of recompense.

The span of just two years seems too small for some of the sociological issues X-2 presents and promptly abandons, but at least the developers can fairly claim to have placed the idea of a society struggling to adjust its focus in the material. Far more irritating is the frankly juvenile nature of the game’s narrative most of the time: while some of the astonishingly simpleminded exposition is amusing, a little goes a long way. When X-2 can be bothered to bring out a larger plot than simply chasing after artifacts while the protagonists (Rikku most of all) natter incessantly, it is in the form of the old forbidden-weapon-now-discovered cliché. 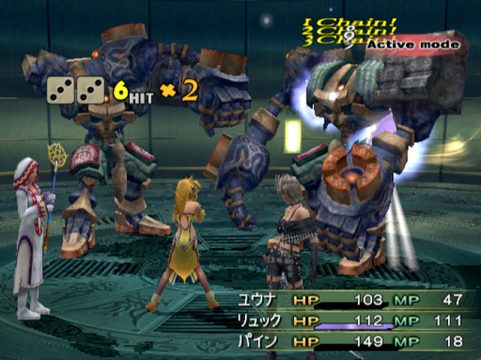 Those machina think they can win? No dice!

Combat in Final Fantasy X-2 revives the Active Time Battle system of Final Fantasy IV-IX, but with some tweaks that seem inspired by the Grandia series. Actions now take time to be carried out instead of activating immediately, and the combatants must physically move onscreen in order to use many abilities that require being adjacent to the target. The protagonist trio also has the power to change their Dressphere (also known as a Job in parlance) during battle, which allows for new strategies to be implemented immediately.

X-2‘s combat is a pretty good variant of the old ATB that, because of its inclusion of Grandia elements, suffers a bit in comparison to that series. The time required to perform actions is integral to combat in Grandia, as is the ability to cancel enemy actions, but neither component in X-2 is at all vital. This failing is relatively minor, and combat is definitely a highlight of X-2, but compared to the Grandia series it comes up short.

When its asinine plot lets up, combat is sometimes the result. Other times, the asinine plot makes way for time-consuming minigames instead. Some of these can be mildly diverting, but all too often they offer minimal reward for maximal work. The insipidly useless things most NPCs say makes avoiding them the optimal strategy, but chasing all over the world for certain personalities who can bestow very useful things is necessary if good Garment Grids and Dresspheres are desired. Finding these characters at the right time is also a requirement, and the only solution if something was missed is to restart — or to use New Game +, which amounts to the same thing.

This optional content is quite useful, because the majority of Dresspheres in X-2 are not simply handed over as part of the story, but must be actively sought. Without consulting a FAQ, finding all of them will require many hours running around Spira conducting aimless busywork in the hope of getting a good reward. The game’s main quest is not difficult enough to make this mandatory, but missing things that are easily found by listening to NPCs yammer at length still rankles. 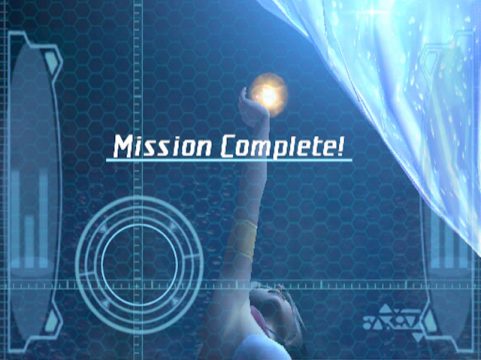 Regardless of the importance attached to the mission, completing it always warrants the whole screen.

Final Fantasy X looked incredible, especially considering how early in the PS2’s life cycle it was created. Final Fantasy X-2 looks nearly as good, which is perfectly understandable because it reuses many of X‘s enemies, environments, and character models wholesale. There are a few new areas and enemies, but almost all of the game showcases Square Enix lazily reusing assets just because it could. The result does look quite good, but is not impressive in the way its predecessor was.

Instead of recycling the score of Final Fantasy X, X-2 uses newly composed background music. Noriko Matsueda, Takahito Eguchi, and Kazuhiro Hara fashioned a great deal of music that does not call attention to itself, and is thus hard to recall, while the music that does stand at the fore often recalls recent pop bands tuning up before a concert. In terms of its voice acting, X-2 is more-or-less akin to its predecessor, though Yuna’s perennial lack of excitement is overshadowed by the deliberate overacting of many other characters. The terrible lip syncing of X remains in evidence, and veterans of Sandy Frank’s dubs will find that the dissimilarity between what characters say and how their lips move is reminiscent of his work.

The core quest of X-2 is not very long, and can probably be completed in less than twenty-five hours. The plethora of optional content will add an enormous amount to that time, should it actually entice players to seek 100% completion. There are some fairly challenging battles in some of the optional missions also, though the central story arc should pose no difficulty to RPG veterans.

There are parts of Final Fantasy X-2 that are enjoyable, but they are often overshadowed by the sophomoric plot and mandatory minigames. Combat is fast and entertaining, if a little underwhelming to Grandia veterans, but all-too-often is subsumed by some other aspect that is far less pleasing. Many people find a fair amount of engrossing content within X-2, and while I can understand what might cause such a preference (the constant frivolity on display is a drastic change from X), it’s not one I share.