After establishing itself as the longest RPG series there is without ever reusing a setting, the Final Fantasy series has finally produced a direct sequel in the form of the bizarrely titled Final Fantasy X-2. While it fails to do much to add to the story of its predecessor, the result is a surprisingly fun game.

Prior to the release of Final Fantasy X-2, it was heavily implied that the story would revolve around a search for the main character of Final Fantasy X. It was also implied that the ability to jump would add a large element of action to the game. Both of these implications are wholely false however. In reality, the game has nearly no story whatsoever. The bulk of dialog comes from wandering the world of Final Fantasy X, hearing all the myriad NPCs talk about how bright and cheery their lives have been in the two years which elapsed between games, with a good deal of these conversations are voice acted by the same hit and miss cast as the previous game. 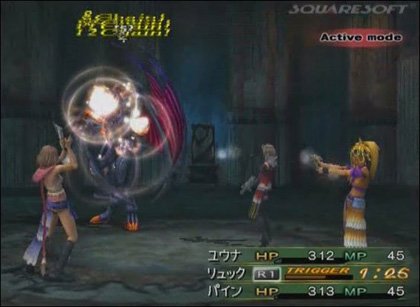 The voice acting cast isn’t the only thing Square Enix chose to reuse for the game. 98% of the characters, locations, and monsters in FFX-2 are lifted straight from X, giving the game the feel of a hastily made expansion than a truly new game at times. Aside from the freedom to jump around between locations from the onset, the only real change between the games is the battle system.

This, however, is where Final Fantasy X-2 earns its keep. Bringing back classic elements such as the Active Time Battle system, and a variation on the Job system from games like Final Fantasy V or Final Fantasy Tactics, battles in FFX-2 after battles bear little resemblance to those from FFX. Combat takes place in semi-real time with characters able to change their class on the fly. This gives instant access to different skill sets depending on the situation. Final Fantasy X-2‘s battles also feature a refreshing lack of the lengthy, overpowering attacks the series has become infamous for in recent years. 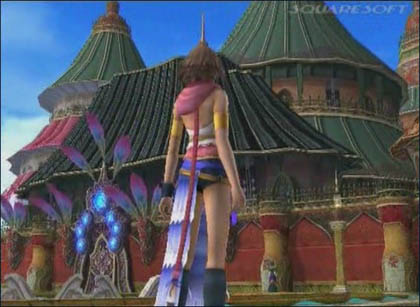 Learning new abilities also harkens back to earlier games, with a simple menu system in place allowing the player to choose how the characters will advance, rather than the cumbersome Sphere Grid system of Final Fantasy X.

The only strike against the new battle system comes in the visuals associated with the various classes. The costumes in Final Fantasy X-2 set a new standard in the field of tasteless skimpy outfits, and gratuitous transformation sequences are thrown in when switching between them. This sort of pandering extends to camera placement and dialog in many scenes as well, lending a Charlie’s Angels vibe to the experience as a whole. 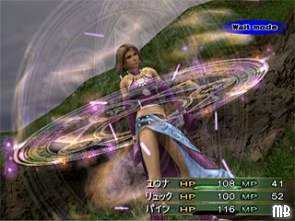 Outside of battle, the game features a fairly non-linear freedom of exploration. In each of the game’s five chapters, every location in the game offers up a quick little mission. These missions range in content from combat, to pure dialog, to simple mini-games. These mini-games are by and large frustrating and unrewarding, but fortunately they do not number in the handful of mandatory missions. Players who choose to skip over the optional missions will likely find the game to be rather short. A Chrono Trigger-style “New Game +” option however will allow them to play through again with all their old items and abilities to fill in the holes in their experience if necessary.

Players looking for an added layer of depth to the story of Final Fantasy X will most likely be disappointed by Final Fantasy X-2. However, those simply seeking a light-hearted fun game may find it to be the most enjoyable thing to come from the series in several years.