Nostalgia is a curious thing. It can manifest as you fold an old sweatshirt from college or come across a favorite book, tucked away on a shelf. Our memories of these cherished experiences grow stronger with time, even if things never quite hit the same as we remember. Clothes don’t fit like they used to, and favorite intellectual properties have been cynically rebooted or remade endlessly with diminishing returns. With its Pixel Remaster series, Square Enix attempts to deliver the experience of the 8- and 16-bit era Final Fantasy games with marginal refinements. Remakes are not the goal with this series; instead, it appears Square Enix wants to take players on a stroll down memory lane. Featuring tweaked graphics, improved map functions, and an updated soundtrack, Final Fantasy VI Pixel Remaster finally delivers the definitive version of a classic title through an experience that not only capitalizes on nostalgia, but looks, plays, and feels like revisiting a memory of an old favorite.

Final Fantasy VI stars over a dozen characters set in a fantasy steampunk setting that effortlessly blends science fiction and high fantasy with a fast-paced story that leaves players breathless. The story has players start as Terra, a brainwashed agent of the Empire who is sent to the mining town of Narshe in order to retrieve a frozen Esper (a magical being from another realm), which has been unearthed in the mines. In Narshe, Terra has a reaction to the Esper that frees her from captivity and joins with Locke, a treasure hunter and member of rebel faction the Returners, to take down the Empire. From there Terra and her growing group of allies work to prevent the Empire from destroying the balance of the world.

The cast includes a pair of wildly different royal twins, a deadly assassin, and a bereft samurai. This ensemble is emotionally anchored by Terra and Celes, two women whose lives have arguably been most impacted by the Empire. Both women’s identities were taken from them by the Empire to be remade in its own image, and their respective quests of self-discovery are the glue that binds the cast and narrative together. Final Fantasy VI‘s tale is grandiose and heartfelt, and the interactions between the characters develop their relationships in a way that still feels authentic and believable, decades later. 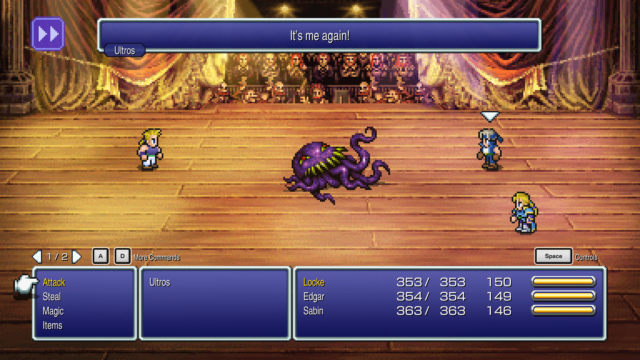 Fans of the opera house sequence will enjoy the treatment it receives in Pixel Remaster.

Final Fantasy VI is a cornerstone and turning point of the series, not only due to its narrative but also the gameplay. The story frequently separates party members, giving players ample opportunities to utilize each character’s special skills in battle. These skills are closely aligned with the character’s job type and range from automated tools used by a king to a soldier whose blade can absorb magic attacks. The Active Time Battle system, introduced in Final Fantasy IV, has been refined, allowing players to dictate the speed and intensity of battle. The battle system is delightfully paced, with fights that don’t overstay their welcome and are infrequently punishing.

The overall speed of battles makes leveling an easy feat, given an assist with the newly implemented auto-battle function. When effectively used, enemy encounters on the overworld map or mid-dungeon can be resolved in short order, showering the party with experience as they level up and master new magic spells. Grinding may be commonplace in RPGs, but in Final Fantasy VI the results feel tangible and largely derived from player input. The magic and battle systems are intuitive, easy to learn, and provide players with seemingly endless ways to build their characters in ways that continue to feel fresh.

Characters are tied to their innate abilities for the first few hours, until magic becomes readily available. In these first few hours, only Terra and Celes are able to use magic, but soon the party gains access to Espers to learn their magic spells and earn specific stat boosts when they level up. This gives players the ability to mold characters to their will, despite their innate abilities lending them a predisposition to particular roles. The result is a gameplay system that emphasizes player choice but not at the expense of the narrative or strong sense of individuality of Terra, Celes, and the rest of the cast.

Graphically, Final Fantasy VI Pixel Remaster is not a grand redesign of the original game, nor is it an HD-2D remake. Instead, the individual character sprites have been revised by initial series artist Kazuko Shibuya with minor tweaks that are designed to be more evocative of the character renderings by Yoshitaka Amano. These tweaks are marginal and will only be discerned by the most ardent of Final Fantasy VI fans. Towns and dungeons and other facets of the graphical presentation receive a similar second wind, including water and spell effects, both of which are particularly impressive. For those looking for an authentic 1990s experience, there’s a filter effect that adds scan lines to the screen. Enemy sprites have been touched up as well. 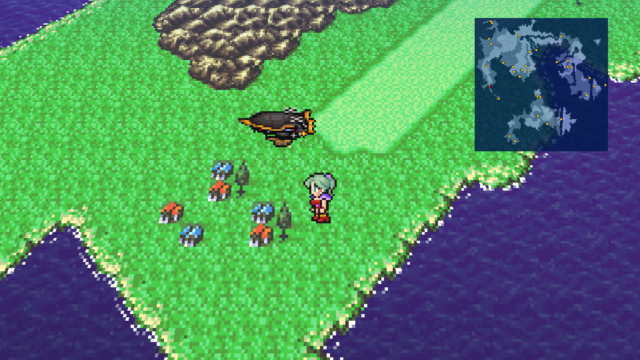 Even the world map has been shown some love with slight graphical upgrades.

The game boasts a remastered score by Uematsu which provides easily digestible renditions of the songs from the original soundtrack. Each song is treated with care and subtle changes are present throughout, deeply enhancing the experience and giving even the most veteran Final Fantasy VI fan something new to catch with each listen. Each character’s theme is unique and well-composed with minor touches improving each arrangement. The battle themes are exceptional, as is the opera house scene involving Celes, which is presented in several languages here. There is no option to listen to the original arrangement which may frustrate some gamers. However, the inclusion of the original soundtrack would make things feel at odds with this refresh, as Super Nintendo-era video game music can be difficult to listen to all these years later.

The last release of Final Fantasy VI – in 2014 on mobile and Steam – was lambasted for featuring ugly character sprites, bland graphical improvements, and an inelegant font. The presentation of this Pixel Remaster is stellar, with redesigned menu and battle screens boasting improved spacing and font selection. Final Fantasy VI Pixel Remaster feels as if it were designed for all modern devices. Other quality-of-life enhancements are present, including a highly detailed world map with a list of locations visited. The Soul Shrine, a bonus dungeon included in ports from 2003-2015, is not included in this release.