The main plot holds nothing back: the empire destroys towns, breaks apart families, wastes lives, and even disrupts the natural balance of the world in their quest for ultimate power. The small group of heroes leads the fight against this oppression, against all odds of success. Almost all these heroes have a story to tell, and through the twists and turns of the main plot, that story is shared.

While the initial reaction might be that a deep story can’t be told in a sprite-based game, the characters exhibit many different emotions with various stances. Some of the most used emotions are shock, laughter, sadness, and thoughtfulness. The use of these sprite variations were key in telling a story back when having videos in a video game was still just a dream.

The graphics of the game do show their signs of age. Final Fantasy VI lacks the ability to show depth on the overworld map, so navigation with a chocobo or an airship looks pixilated and very flat indeed. Because of this, especially with the airship, navigating the world takes some patience as some places are difficult to spot until the player is right on top of them. Since the airship can’t fly in reverse, Square Enix allows a non-flight based navigation by pressing the L and R buttons simultaneously. While it is quite helpful for landing, it’s hardly a graceful approach. 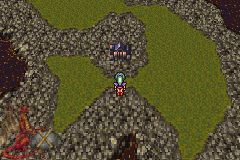 Ah! I wish I had the Mini spell.

Where the graphics excel is in battle. With special techniques, spells, and just fighting in general, the animations for everything are splendid. While it’s not heart-stopping action, it’s possibly the highest quality sprite battles found anywhere.

If only the battles weren’t so slow. Even at the fastest setting, it seems the action gauge chugs along. The use of the spell “Haste” results in perhaps a 10% increase in speed. There is almost no difference in the configuration setting of level 3 speed to level 1 speed. When fighting hard bosses, the gauge just does not move fast enough.

New additions to the Game Boy Advance version of Final Fantasy VI actually add very little to the game itself. There are four new espers, three new spells from these espers, and a bonus dungeon. Like the previous Advance releases of the Final Fantasy games, none of the bonus content fits into the game before the player can finish the story normally, and once obtainable, the party is a high enough level that they can destroy any story-based adversary in the game. The new espers are given a small bit of story about how they managed to escape just before the heroes reached the facility they were being held in. Considering how powerful they are in battle, it’s at least plausible. Each new esper has been spotted by a different NPC and talking to that NPC reveals the hint on how to locate the esper. It’s not much, but it is enough that thorough searching will prevail. Finding the esper is only half the battle — don’t even think about taking it on with a normal party. They are clearly only there for the sake of the extra challenge, as shown by their difficulty and the lack of new spells taught. Of course, when there’s already the devastating Ultima spell, learnable in two different ways, how many more spells are really needed? 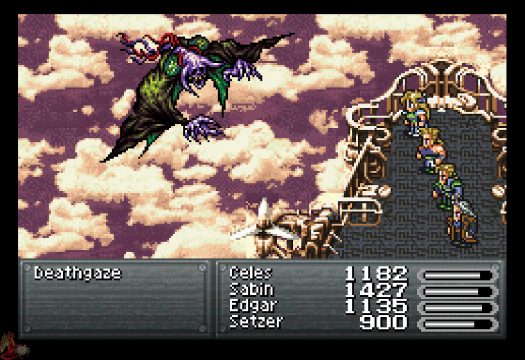 The localization has been redone as promised. Each character feels closer to their true nature, more straightforward with how they feel, and there is definitely less confusion regarding the mysterious Siegfried. Some of the changes may be unwelcome because they change familiar names into peculiar names. These changes include retranslations of the esper Tritoch (now Valigarmanda), the esper Palidor (now Queztalli, not even Quetzalcoatl) and the relic Moogle Charm (now Molulu’s Charm). Kefka’s classic submariner line has also changed. Ultros, however, does not follow its Final Fantasy XII counterpart’s name change and remains the same.

Also included are the expected Music Player and Bestiary. Nobuo Uematsu was still fresh and innovative with his creation of the music of Final Fantasy VI. The music player, which allows players to listen to any song in the game once they have completed the storyline, is once again a great addition. While the music is limited by the technology, it’s still worth remembering. The Bestiary shows what items can be stolen or may drop from the monster, as well as how many of each monster has been slain, and the monsters’ vital statistics. Unfortunately it does not include whether or not the monster can be used to learn Rage or Lore abilities, which would’ve been a useful feature.

Final Fantasy VI Advance offers today’s players another chance to experience what could be the best story in the Final Fantasy series. Square Enix labeled the series as “Finest Fantasy for Advance” in Japan, hoping to entice new and old gamers to enjoy this classic title. While the additions probably aren’t enough to make it worth replaying the game if you’re just in search of new abilities, the game itself shines. If you haven’t played Final Fantasy VI before, or tried to play through the PlayStation port in Final Fantasy Anthology, this game is definitely worth the purchase. For gamers who’ve already enjoyed Final Fantasy VI, the main reason to purchase would be for nostalgia. For most of us, that’s enough of a reason.