More Jobs Than You Can Handle

Final Fantasy V Advance is the middle game of the trifecta of Final Fantasy games released this fall. Of these titles, Final Fantasy V is the only game the North American audience has seen before, as it was part of Final Fantasy Anthology for the PlayStation. Because of these circumstances, a lot of RPGamers might decide to drop this title from their holiday wish list.

For those who have played the game before, there is the new translation and the four new jobs to look forward to. For the rest, it’s one of the missing pieces of the Final Fantasy series. After finishing this game, one has to wonder why the game was never brought over in the first place.

The story begins simply. The Wind Crystal has shattered. Lenna’s father, King Tycoon, went to check on the crystal and has not returned. She slips out of the castle to find him and runs into two men, Bartz and Galuf. Bartz is an adventurer, traveling with his chocobo wherever with no particular goals in mind. Galuf is suffering from amnesia, but knows he must reach the Wind Shrine. On the way they spy a pirate ship moving without the wind. They reach the pirates’ den and try to steal the ship, but are caught by the pirates’ leader, Faris. After hearing their pleas for help, Faris decides to join the three to the Wind Shrine. Thus the party of four is united for the first time.

The party travels the world, trying to stop the abusive treatment of the remaining crystals before it’s too late. Each crystal controls a key element of the world, and each one has a machine attached to amplify this element for the good of the kingdom possessing it. They find out that someone is behind this misuse, hoping to break the crystals. When they learn the true nature of the crystals, it becomes even more urgent to save them, but will the party be too late to stop the world from dying? 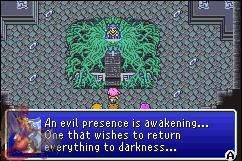 An evil presence is coming

Since Final Fantasy V is a sprite-based game, all the emotions and storytelling are done in simplified expressions. The characters can express a sigh, a laugh, shock and thinking without any exaggeration, but they also show love, worry and more with an emoticon above their head. At first, the emotions and emoticons seem to be used too much, but as the game progresses, the characters settle down and these are saved for key moments. Even though characters are displayed only as tiny sprites, each is easy to understand fully.

This bonding with the characters is important. Unlike the previous Final Fantasy (FF4), the story revolves around very few other characters. The party is mostly set from the beginning to the end of the game. Instead of characters joining and leaving the party as the story dictates, the variation of gameplay for the party comes from the player’s selection of jobs.

How many jobs? The player will have 26 jobs to choose from if they decide to explore the entire game. Twenty-one of these jobs are available in the first one-third of the game, giving a feeling of overwhelming growth at times. Of the five jobs added late in the game, only the Mime job was available in previous releases of the title. Three of the four new jobs are available before finishing the game, but the final job will not be open until completing the bonus dungeon added exclusively to Final Fantasy V Advance.

Mastery of the job system is essential for this game, as the bosses pull no punches. One complaint about the game, because of its difficulty and the logistics behind trial and error, is that the game resets after the party falls in battle. The game should allow reloading from save without dropping back to the title screen, forcing the player to cycle through multiple screens before restarting. It’s a small complaint, but when taking on the same boss for the fourth time, it becomes noticeable. All characters can become any job at any time, making the combinations for each boss battle almost limitless. It could take multiple tries before finding a combination that works. It’s the beauty and the curse of the job system. 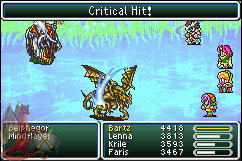 Battles take place in the Active Time Battle system that was the new thing when Final Fantasy V was made. Everything in battle has a gauge that fills over time. When the character’s gauge is filled, it is his or her turn to act. Unless a magic or item menu is opened, time does not stop when it’s someone’s turn, but no one else in the party can act before a selection is made for the active character. Enemies do not wait and will take full advantage of delays in selecting an action. The speed of the battles can be set in the configuration, for those who need more time to think before their next move, or those who find the gauge too slow for their liking.

Each battle ends with the expected Final Fantasy fanfare, and the awarding of gil, experience points, and Ability Points (ABP). The ABP is applied to the current job of each character alive after battle. If the character is KO’ed or removed from battle somehow, they do not earn experience or ABP. Each job has an ABP count to the next level and a reward for reaching it. For melee jobs, a new skill could be opened up, or maybe a stat bonus. For mages, since they can use all available spells immediately, gaining levels in the job allows that level, or row, of magic to be used on a different job. The Ability option allows one skill from any other job to be used while training a new job, making for some powerful character building.

The game would get pretty tedious if it wasn’t for the wide variety of music on the soundtrack. Final Fantasy V has quite a few memorable pieces of music, such as “Battle on the Big Bridge” and “Dear Friends.” Once the game is completed, the Music Player is available from the start screen to enjoy the soundtrack in its entirety, an addition to the Advance ports that is welcomed by Final Fantasy music fans everywhere. For the price of the hard-to-find original soundtrack, the entire game can be enjoyed.

Final Fantasy V Advance offers North American players the long-awaited opportunity to complete the FF SNES trilogy. While the PlayStation version does exist, it is widely considered inferior to the original. This port of the game to the Game Boy Advance remedies the shortcomings of the PlayStation version and brings to this side of the Pacific a game worth playing — finally. While Final Fantasy V‘s graphics are the weakest of the three new titles out this fall, graphics alone are no excuse to miss out on an otherwise solid game.