Pick Yourself Up, Start All Over Again

At the time of its release, Final Fantasy Tactics was a member of a rare breed. Spinoffs of the Final Fantasy series that started that way in Japan were represented primarily by Final Fantasy: Mystic Quest, and thus hadn’t attracted much interest from serious RPGamers. Tactics changed all of that by spinning off from the main series into something that successfully enticed the audience for most of Square’s products, and this tactic would one day become employed on a regular basis. Very few of the titles Square would spin off from the main Final Fantasy series attained the acclaim that Tactics garnered, and this game’s flawed but immensely rewarding nature helps explain why.

Tactics‘ plot concerns young Ramza, a scion of the important Beoulve family. Ramza’s refusal to countenance cheapening his principles in order to play by the standard rules of politicking leads to his first being ostracized, and then the rest of the Beoulve clan assenting to his death by the groups he offended. As he antagonizes the various ruling clans of Ivalice, Ramza begins to encounter foes who can transform into monstrous opponents using the power of ancient talismans called Zodiac Stones.

With the exception of the Zodiac Stone portion, Tactics eschews the usual plot elements of Japanese RPGs in favor of something more akin to an intricate novel. An effort is made to flesh out the politics and culture of Ivalice to a surprising extent while the people who fill the narrative are rendered in shades of gray instead of stark black and white. The multilayer tapestry Yasumi Matsuno weaves with this narrative would have been better suited to some other form of media because of how difficult it can be to keep the various personalities and their motivations straight without a means of going back to refresh one’s memory, but an overly ambitious effort is always preferable to something that didn’t bother to try.

The localization of Tactics certainly does it no favors, and became renowned for its poor quality. Sentences are written in ways ill-at-ease with the usual rules of the English language, grammar is routinely ignored, typos make even the spelling of character names problematic, and ‘punctuation’ is routinely ‘flouted.’ Square’s localization team dropped the ball in a sizable way for this game, and the mixed reception War of the Lions‘ new translation garnered suggests that Matsuno’s intricate storyline has yet to see the English rendering it deserves.

Final Fantasy Tactics‘ combat system lives up to its name, in what was a definite break from the rest of the series. Fighting resembles Shining Force and Fire Emblem a bit, but far more variables have been included than those series ever introduced. Arguably the most important is height, which dictates whether physical and magical attacks can land. The concept of death is also unique, with characters that have fallen lingering for several turns before disappearing forever with no means of recovery possible. The presence of a visible turn order removes any mystery about the opportunities for action, which is a very good thing. There are plenty of factors to think about in Tactics‘ fights, and doing so is usually a rewarding pastime. 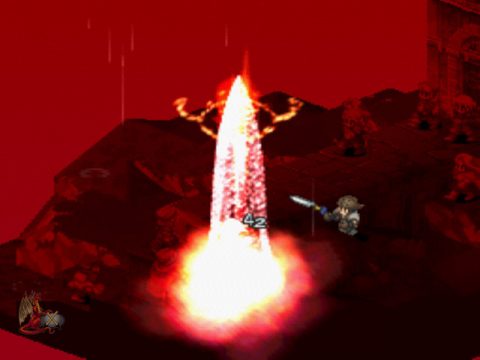 Pretty weak for Gafgarion. Maybe he choked on his own name.

One unpleasant aspect of the combat interface is the game’s unusual movement methodology. In most tactical games, a character’s movement can be canceled after analyzing the possibilities from a location. This title forbids that, and its height emphasis makes the inability to go back to the starting point quite penalizing if a character is actually prevented from accomplishing something that looked to be within range. This makes it necessary to constantly count movement tiles, but unless the player has a great memory, keeping the height requirements of every move on hand is a significant burden. Spending enough time with the game alleviates this issue, but circumstances will still arise in which the player thought a character could do something from a location that isn’t possible.

The Job system of Final Fantasy Tactics is an extremely addictive character development system that will suck in the attention of anyone who starts experimenting with it. The starting options for classes are fairly scanty, but as characters become proficient in those initial fields, the choices broaden enormously. Extending the concept of Final Fantasy V that allowed the ability of any Job to be used in addition to the class a character currently sports, Tactics allows that and more. Abilities that kick in as a reaction to enemy action, passively, and as movement aids can also be learned from the many classes, then mixed and matched as the player likes. All abilities and Jobs are not created equal, but tinkering with the system is enormously entertaining, and one of the most addictive time sinks Square ever made. It is possible to spend hundreds of hours with Final Fantasy Tactics seeking to learn every ability and ferret out every hidden item. Simply completing the game can be done in the range of fifty to sixty hours, but the temptation to sit around not advancing the story is always there, and easily acted upon.

The wealth of options for character development allows for many approaches to finishing the majority of battles. Rarely is there but one way to claim victory, which is a good thing considering a number of battles are extremely trying, and the AI is aggressive enough to require constant alertness. Level grinding is no solution in Tactics since the benefits are minimal, forcing players to try fights again in a different way rather than marching off to fight random foes. This doesn’t prevent certain fights from being incredibly frustrating to the point of inducing expletives from the player, but it does allow for multiple ways of approaching them instead of just hoping to get lucky. This changes in the later portion of the game when certain incredibly powerful characters join Ramza to make crushing the enemy much easier, but the majority of the game rewards experimentation with the variety of abilities and Jobs provided.

The plethora of options for Jobs demands that players keep a sizable inventory of equipment on hand for whatever circumstances demand, but the game helpfully has characters don whatever the best materials available are. The game’s determination of what constitutes the best things to use is often arguable, but switching things around to fix any questionable choices is easily done. Shop menus are huge due to the volume of materials on offer, but aside from their sheer size present no major issues. 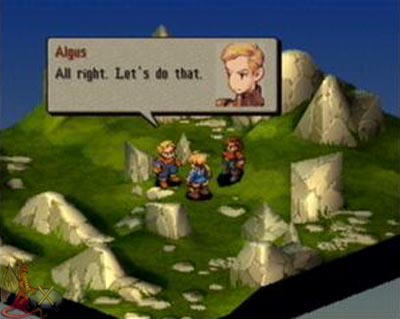 By avoiding the 3D models of most Square titles on the PlayStation, Matsuno kept the presentation of Tactics from aging as badly as many contemporaries. The sprites and environments don’t push the hardware very hard, but neither are they an affront to the eyes. The fancy and time-consuming attack animations of other PlayStation Final Fantasy games will not be found here, and the pace is considerably quickened through this method.

One aspect of the visuals revives a common frustration of the 16-bit era, however, in the form of isometric perspective view. Instead of a simple overhead view, or the ability to rotate the camera in any direction like Shining Force III, Tactics limits the perspective to four different forty-five degree angle shots. The importance of height in the game means that very few battlefields are flat, and finding a workable angle with which to see the onscreen happenings is often difficult. Battlefields with platforms or archways suspended above terrain at a lower level are particularly vexing, as the selection cursor often doesn’t want to stay at the height that is needed.

Masaharu Iwata and Hitoshi Sakimoto’s score is excellent. The wide variety of tracks, and the high quality almost all of them exhibit, make it worth keeping the audio going all the time. The sound effects are unmemorable on their own but good enough not to interfere with the overall listening experience.

Final Fantasy Tactics is a long way from flawless, but nevertheless manages to be an incredibly addictive experience. Yasumi Matsuno’s unique touch ensures that it stands apart from most other tactical games, and while the game can induce bouts of extreme rage during certain battles, something about it kept drawing me back. A game that tries too much is far more interesting than one that tries too little, and the gameplay stays engrossing even when nasty fights have made a mockery of the preparations beforehand. I don’t agree with it being vastly superior to its portable FFTA descendants of more recent years, but there’s something special about it that is most definitely worth experiencing.