Shoot for the Moon. Even If You Miss, You’ll Land Among the Stars.

After leading his men in a massacre on a peaceful village, murdering the town’s under-equipped guards, and plundering its greatest treasure, Cecil, grisly dark knight and Lord Captain of Baron’s Red Wings, begins to doubt the intentions and morals of a king who would have him use his black sword to slaughter innocent people. Soul-searching is unacceptable, as is questioning the king’s motives, and Cecil is promptly demoted to delivery boy status and sent out into the world with his slightly angst-ridden friend and rival, Kain. Thus begins Final Fantasy IV DS, a game that truly needs no background explanation or introduction, being Square Enix’s first proper remake of the classic RPG from yesteryear after a decade and a half of ports. What the opening description of the plot belies is that everything is redrawn in beautiful 3D. The music has been reworked. The 2D sprites are gone. Every line of text has been retranslated. The heart of an excellent, archetypal game has been transplanted into a modern body, and the result is an eclectic mix of old and new that draws its strengths from the contemporary improvements while being somewhat hindered by the source material.

The shiny, new presentation is the most obvious and noteworthy achievement of Final Fantasy IV DS. Matrix’s graphics engine has noticeably improved in the year and a half since Final Fantasy III DS. Specifically, the textures are more detailed and look appealing even when the camera is tightly zoomed in on the characters. This is eagerly taken advantage of; cutscenes tend to show close-ups of the character models, and when the player accesses the menu, the bottom screen is filled with large images of the characters. Monsters are blessed with the same upgraded detail level, and bosses really jump off the screen with vivid clarity. During major encounters, the camera is slanted to a diagonal, forward-facing viewpoint so that bosses can be intimidatingly enormous while still fitting on the DS screen. Although Final Fantasy III DS‘s bland textures are corrected, its pointy, jaggedy polygons are still present here. They are less obtrusive, but anyone distracted by them in Matrix’s last Final Fantasy remake will also be bothered by them in this one.

Taking full advantage of the various soundtrack arrangements available, the game’s score sounds like a collection of highlights from Final Fantasy IV albums produced over the years. The music styles range from the overly orchestral to the beautifully simple, even including minor influences from the Celtic Moon album. It sounds wonderful, and may be the best aural experience the underpowered DS sound chip is capable of generating. Square Enix could have rightfully placed a “For maximum enjoyment, please use headphones” disclaimer in the start-up screen as Elite Beat Agents does. The beeps and boops Uematsu spent long hours crafting into commendable music on the SNES have been reconstructed into something grand, but the hacking, slashing, menu-traversing sound effects may all have been copied straight from the SNES code. Major cutscenes have voice acting, and it is surprisingly crisp considering that the dialogue is compressed into a cart and playing through DS speakers. The acting quality itself is also exemplary; the actors emote well and add to the believability of the characters.

The plot of Final Fantasy IV DS is where the rough edges between what the remake attempts to upgrade and what it intentionally keeps old begin to show. Final Fantasy IV‘s plot emphasizes the individual characters rather than the overarching story, and this latest localization of the game excels at finally presenting them in an understandable and realistic manner. When the menu is opened, the party leader’s thoughts on the current circumstances are shown on-screen. The leader can be changed at any time, and these internal revelations are updated frequently. A significant amount of character development is added to the game in this manner. 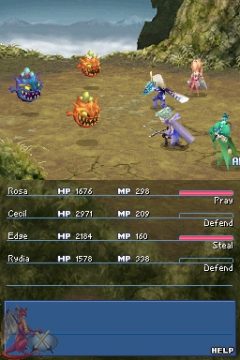 Pretty battle graphics are the bomb.

It is disappointing, then, that while the characters are tweaked to update and strengthen their personalities and motives, the main story and its transitional events are left entirely untouched. The happenings which progress the narrative often conflict with common sense or with the game world itself. The characters are the most believable they have ever been, but their actions are not. Added lines of dialogue, mostly with NPCs, explain or foreshadow the most spastic story moments and definitely create a rounder, more interesting world. Logic-defying occasions still stand out, though, and reveal a thick, solid line Square Enix refused to cross when remaking a famous game with a large fan following. Exacerbating the plot issues is Final Fantasy IV DS‘s slow pace. The front-loaded story is heavy in the beginning and nearly absent in the last half. This worked when the game was beatable in under twenty hours, however this version takes over twice as long to finish as the original because of the many gameplay revisions and higher difficulty. By the time the ending credits roll, it is easy for one to have forgotten about the people and towns affected over the course of the game.

There is a less negative side to the change in pace. The speed was slowed due to the total reworking of the party members’ growth, statistics, and skills in order to make the gameplay more modern and balanced. Cecil can no longer carry the whole party on his back while thoughtlessly ripping his way through enemy encounters. Battles are tougher than before, but the player always has an array of useful skills at his disposal to help him overcome obstacles. The difficulty snaps back and forth between being marginally too easy and marginally too hard, and the uneven challenge forces the player to stop and level grind every so often. Sometimes the first enemies in a dungeon will introduce a sharp difficulty spike, other times a boss will be in a completely different league than the dungeon’s random fights. Keeping the player from becoming too complacent during the easier sections, this inconsistency is a welcome stimulant and never unfair. One will need a strong stomach for game over screens, though. 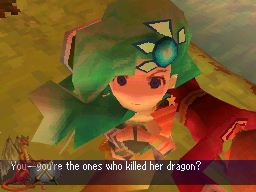 Don’t make her angry. You wouldn’t like her when she’s angry.

Battles are managed by the Active Time Battle system used in Final Fantasy IV through IX. It differs from a turn-based system in that commands are entered as individual party members’ ATB gauges fill up. Attack commands get queued without hesitation. Spells and items require a second gauge to fill before the action takes place. Enemies follow similar rules, sans charge times for casting spells. Time freezes during battle animations, so for much of the encounter, attacks entered by both friends and foes will be sitting in an undisplayed queue whilst awaiting their execution. The speed of battle can be modified in the settings, and increasing it to the fastest level substantially raises the difficulty of the game. At the highest setting, ATB gauges charge so quickly that enemies regularly squeak in extra attacks between the party’s entered commands. Time also pauses when the player searches through the magic and item menus, but this feature can be turned off to increase the difficulty as well. Like the main plot events, no updates were made to the battle system itself in the remake. Though the battle gauges are all displayed, the command queue is not. For the tougher fights, the player will need to store his party members’ command order in his head and rely on luck while guessing when the opponents’ attacks enter the queue. The bottom screen shows all of the party and monster information during fights. This lets the battle screen remain mostly HUD free, however switching one’s gaze between the two screens while time ticks away feels awkward.

In remaking Final Fantasy IV, Square Enix and Matrix overhauled and vastly improved the game’s graphics and sound, wrote a high-quality translation whose competency is comparable to other recent endeavors like Final Fantasy XII and Dragon Quest VIII, rebalanced all of the characters’ statistics, skills, and growth, raised the difficulty level, and slowed the pace all to closer match a modern RPG. Wily bosses now have additional, tricky, special attacks to make their battles more interesting. Characters can permanently learn support skills to allow a moderate amount of customization. If there were ever a question about the difference between a port and a remake, Final Fantasy IV Advance was a port with a decent localization and an extra dungeon. Final Fantasy IV DS is a remake, rebuilding the initial game from scratch and making everything new. Ironically, the few bumps in the experience come from places where material was stubbornly grafted straight from the source to the remake. The plot is archaic and the battle system, while missing the glitches in past iterations, feels old in such an otherwise fresh game. There is more than enough novelty here relative to the original to warrant a purchase from those who have already played the SNES, PSX, or GBA version. Those who have put off trying this classic can now finally enjoy a trend-setting game without dealing with all the 1991-ness of the original.