Many serious fans of the Final Fantasy series have long griped that, despite the multitude of ports and rereleases of the games throughout the series’ long history, there remained one game, the third installment, which had never seen release in the United States. It was left out of the glut of anthologies and compilations that came to the US on the original PlayStation, and it never got an Game Boy Advance port along with all the other games from one through six. With this absence from American shores, it has long served as the series’ missing link.

Up until now, anyway… though not in its original form. Final Fantasy III now holds two distinctions: the last classic Final Fantasy to come to English-speaking languages; and the first game in the series to receive a fully comprehensive remake, far more along the lines of remakes like Wild ARMs Alter Code: F than upgraded ports like Final Fantasy IV Advance. From the moment the player boots up the game and is gripped by a stunning FMV sequence accompanied by a stirring orchestral song, it’s clear that Final Fantasy III DS is no NES game.

Much about the game has changed from its original incarnation on the NES, aside from the obvious superficial difference — drastically upgraded graphics. Graphically, Final Fantasy III DS more resembles its PlayStation brethren — particularly VIII and IX, two games with which it’s about technically on par — than it does its old NES counterparts. All environments have been upgraded to full 3D, as have battle sequences, and polygonal character models have replaced sprites. The results, which are amongst the finest on the DS, are lovely, particularly the detailed towns and dungeons.

The art, too, has been totally redone — instead of Yoshitaka Amano artwork, the game has character designs by Akihiko Yoshida, and so character portraits and in-game character models most closely resemble characters from Final Fantasy Tactics than other main series installments. One of the more impressive things about the game visually is how much detail there is — each of the four characters has their own unique artwork and designs for each of the many classes available, and their status screen portraits and field models both change depending upon class. It’s a very nice touch. 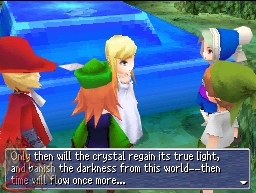 But as mentioned earlier, the remake didn’t stop at graphics and art. The designers also reworked the game’s music, story, characters, and gameplay. Nobuo Uematsu’s original tunes received compositional arrangements and technical upgrades to the much more sophisticated sound hardware the DS offers compared to the NES. The work helps Uematsu’s original designs shine through much more strongly and help Final Fantasy III stand out as one of the beloved composer’s finest works. The introduction music, battle themes, event sequences, and many of the dungeons are all marked by a classic sound, the composer’s hallmark style, and truly memorable musical themes. The villages of Ur and of the Ancients, the land of Eureka, and the overworld theme are all beautiful examples of this.

The original game wasn’t much in the story department, as was more typical of NES RPGs. The four characters who make up the Warriors of Light were just nameless, generic, indistinguishable orphans. Final Fantasy III DS does much to bring the tale more up to the standards in storytelling set by the SNES games. Now each of the four are named, distinctive characters with their own personalities and separate backgrounds who join at different points for their own motivations. This makes for a much richer experience with deeper levels of personality and character interaction, not only between the four heroes but also the various guests that accompany them at different points. As to the story itself, it is classic fare — Final Fantasy III predates the cliches, and the narrative, while never particularly deep or unpredictable, has a great deal of charm. This is aided by the very strong writing and character dialogue, as is typical of recent Square Enix localizations such as Final Fantasy XII and V Advance. Will the game win any awards for depth of political intrigue or personal salvation? Well, no, but it’s not meant to — it’s a case study in how some stories can work because of their simplicity rather than in spite of it.

There have also been gameplay changes and enhancements, though the core of the game’s mechanics remains intact: the game was the originator of the Job System which became further popularized in later installments such as Final Fantasy V and Final Fantasy Tactics. The system is noted for its flexibility in character customization — with the player given access to over twenty classes, each with its own abilities, throughout the game, he or she can switch each character between classic jobs at will. Battling through hordes of monsters in long, well-designed dungeons yields experience points to increase both the character level and the job level, and it’s necessary to increase both to get truly improved stats. Under a system like this, even beginning classes maintain usefulness throughout most of the game’s length. Some jobs have been tweaked a bit compared to the original as well, and the whole of the job system is very well balanced. In addition, the character’s starting job has changed to Freelancer, while their job in the original game, Onion Knight, is now unlockable by completing a sidequest. The battles, in contrast to the active time system used by most later games, are pure turn-based. One nice thing about them, though, is that they’re super-fast, which eases the bother of the random nature of the encounters and makes level grinding much more fun.

Other gameplay changes include the addition of strictly optional touch screen controls, which rather than feeling tacked on, come across as fairly smooth and easily navigable in and outside of combat, making for a nice alternative to scrolling through menus with the d-pad. The game also added a Final Fantasy IX-style Mognet system, which allows the player to send to and receive letters from real-life friends as well as characters within the game, such as Cid the airship pilot. Letters from game characters are an enjoyable addition which help unlock optional sidequests in addition to exposing a bit more character and personality to some of the ancillary figures in the game. 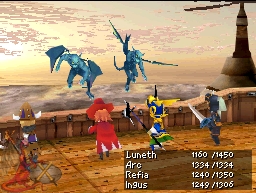 One thing that hasn’t changed between the NES original the DS remake is the challenge, however. Contrary to GBA installments like Final Fantasy Tactics Advance and Dawn of Souls, Final Fantasy III DS isn’t a beginner’s game, no matter what the touch controls and chibi artwork may lead one to think. Properly managing jobs requires foresight and planning, as a high level character with a low level job will suffer greatly in stats, there is a temporary stat penalty when switching between jobs, and going into battle without the right tools can lead to a swift and brutal demise. With limitations on MP and valuable items like Phoenix Downs, proper resource management also becomes an important consideration. It’s fairly easy to wander into an area with more powerful, if not unbeatable, enemies. Bosses, meanwhile, are tough almost from the get-go, which may come as a surprise to series newcomers who are accustomed to easy bosses aside from optional ultimate enemies. And dungeons are long, with strong enemies that pose a true threat of attrition to characters before they reach each boss. This game is, most fittingly for any game that strives to hold the mantle of old school gameplay, made for the hardcore. And this is not a bad thing at all. In fact, it’s refreshing to have a game that challenges, occasionally frustrates, and always keeps the player on his or her toes. Difficulty is only bad when it’s a result of poor game design, and that is never the case in Final Fantasy III DS.

The game is by no means perfect, of course. While the graphics are on the whole superb, things become a bit too pixelated when the zoom-in feature is used, and though the environments are 3D, the inability to control the fixed camera can sometimes, though only rarely, pose inconveniences. And there are some minor interface issues — the lack of an Optimize option in the character equipment screen, for instance, or displaying battle commands on two separate tiers instead of all at once. But these are, after all, minor, and they do little to detract from the overall quality of the game. There is an inability to save within dungeons, but between the combination of a hardware sleep mode and the game’s quicksave feature, this is not really an issue, and is a mostly acceptable design choice that simply serves to accentuate the overall challenge of the game. The only point where this is genuinely frustrating is in the game’s final dungeon.

It’s impressive, the amount of care and adoration that went into the adaptation of a classic Final Fantasy in this modern day remake, and while playing, it’s really easy to see the respect the designers had not only for their source material but also for the fans. In many ways, Final Fantasy III DS is like a love letter from Square Enix to true aficionados of old school, classic RPGing, with a heavy focus on challenging gameplay combined with charmingly simple storytelling and memorable, thematic music. And whether this is the last Final Fantasy game a fan has yet to play, or even if one has already played the original, this is a game no one should pass up.