A Side of Chocobo Wings

Square Enix’s Final Fantasy Fables: Chocobo Tales is a new game with old roots. Known in Japan as Chocobo and the Magic Picture Book, this Nintendo DS game takes many elements from the Final Fantasy series and blends them into its own little world of cuteness, card battling, and minigames. Final Fantasy Fables may look like a title for kids only, but offers a great deal of variety for gamers of any age. Fans of the series will be quite familiar with all of the Final Fantasy lore included in this title, as Chocobo Tales offers more series references than you could stuff in a fat chocobo.

The story is simple, yet charming, mainly because it never takes itself too seriously. Chocobo lives on a farm with Shirma, the white mage, Croma, the black mage, and tons of feathered friends. One day Croma brings back a mysterious book that, once opened, sucks up all other chocobos on the farm, leaving only little yellow Chocobo to save them. From there, Chocobo must venture out to find picture books in order to find ways to rescue his friends. These books include minigames and tell Final Fantasy-themed stories based on such writings as Aesop’s Fables and the Brothers Grimm. There are such stories as Jack and the Beanstalk, but in this game Jack has been replaced with the earth summon Titan. In another story, The Boy Who Cried Wolf has had his wolf replaced by Leviathan. These stories have nothing to do with the overall plot and sometimes are more of a distraction than anything. The main story, though shallow, is rather entertaining mostly because of the quirky, pop-culture filled dialogue. Croma states at one point that Shirma is “pretty fly for a white mage.” This kind of joking humor is ever-present throughout and tends to help with the carefree, joyful feel of the title. The lack of plot depth doesn’t detract from the title, but doesn’t gain it any prestige.

Chocobo Tales is basically made up of three major areas of gameplay: microgames, minigames, and card battles. Microgames are quick challenges with score requirements that must be met in order to obtain either a silver or gold medal. Upon obtaining these medals, the player is given a card. A gold metal will net the player a better card than a silver. These microgames can be replayed over and over either until obtaining both cards or just for the personal gratification of getting a higher score. Though the gamer could ignore these microgames completely, the rewards for completing them make it beneficial to do so. The minigames which take place via the picture books are not only required to advance the plot, but make up for the vast majority of the game. Picture books offer two types of minigames; the first is trial mode, where the player must score a certain number of points or complete an objective under a certain amount of time. The other mode is battle, where Chocobo competes against computer controlled opponents. Each book has six special requirements to meet in order to complete the book, but completion is not required. Only a handful of these requirements must be met to advance the plot, which is nice due to the fact that some of the minigames are downright challenging and a few are just boring. Most are entertaining enough to not cause a great deal of serious frustration. 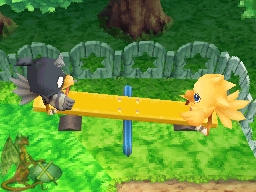 You think we should get back to the quest?

The card battles, known as Pop-Up Duels, are the most strategic and entertaining part of Chocobo Tales. All of the cards gathered through the mini and microgames are available for the player to create a dueling deck. During Pop-Up Duels, Chocobo faces off against a single opponent, usually a boss. Each dueler has their own unique deck, hit points, and crystal points. To win a duel, the player must bring his opponent’s hit points down to zero. Each side will have three cards in hand and must determine which of those cards is likely to be the most effective. Each card is a specific color and has four zones. These zones either will be blank, have an attack icon, or have a defend icon on them. When the cards are matched up in battle, the outcome is much like a game of Rock, Paper, Scissors. When the same-colored zones are compared, attack will be successful against a blank zone, defend will stop attack, and two attacks will cause each to deal half damage. The player that selects a card first will go first unless otherwise changed via a status effect like Slow or Haste. Most cards have special conditions on them, that if met, will cause damage or status effects like Silence against the opponent or Protect for the caster. A single crystal point is gained at the end of each round depending on the color of card used in battle with only gray cards gaining nothing. These points, which are essentially magic points, are required for some of the more powerful spells. Pop-Up Duels are easily the best part of the game and the main focus of the title, but the in-game battles are sadly few and far between. Thankfully, Pop-Up Duels are available via Nintendo Wi-Fi Connection. Gamers can play against acquaintances by sharing friend codes or can be randomly matched up against opponents with similar ratings. This greatly extends replay and gives players a reason to collect as many cards as possible.

Most of the games are controlled via the stylus. Some games are extremely stylus-friendly, like the microgame Bomberwall where the player must navigate around a puzzle board by tapping the screen with the stylus and following arrows a specific number of spaces. Minigames like Rescue on the Rapids, where the player uses the stylus to steer an adamantoise, are also easy to control with the stylus. Lightning-Fast Labyrinth is a minigame that requires navigating Chocobo around a maze without touching the sides of the maze and the inaccuracy of stylus interface makes the game quite frustrating. Some microgames don’t even use the stylus at all; instead they have the gamer blow into the microphone. Card battles use the stylus to tap between cards for viewing of attributes and to flip them up to the top screen for combat. The flipping is a nice feature that makes it seem like actually tossing a card onto a table. From some of the more intense minigames to flipping cards, there are times when the stylus just isn’t as accurate as it should be, but for most of the games it is responsive enough to not hinder gameplay. 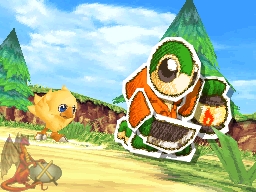 Tonberry is gonna huff and puff and stab your house down.

Visually, Final Fantasy Fables is bright and colorful, on par with the level of detail found in Square Enix’s recent DS offering Final Fantasy III. The game makes good use of the two DS screens with minigames and Pop-Up Duels filling up both. Most of the explorable game world is rather uninspired, but the visual quality within the minigames and duels is impressive. Since the minigames take place within a picture book, the flattened 2D environments combined with 3D characters result in a beautiful experience. Card battles are equally as impressive, though just the opposite, as they take place in 3D arenas with 2D creatures representing the summoned monsters from the cards. The high quality of the visuals combined with the unique blending of the extremely different styles make this game look unlike anything else.

A true highlight for Final Fantasy fans is the music. With tracks from seven different Final Fantasy games along with many other pieces, the variety may not be extremely original, but is quite enjoyable. Players will be exploring a dungeon featuring a track from Final Fantasy VII one minute and be in the middle of a cutscene with music from Final Fantasy IV the next. Fans of Nobuo’s early work should love this. Those who don’t care for his style or those hoping for something fresh and exciting might be disappointed, but there is a good bit of variety offered. The in-game sound effects are nothing outstanding, but the cuteness of the chocobo sounds are used just enough to not become irritating.

Final Fantasy Fables is quite unique, offering a wide variety of gaming options. While building on the massive world of the Final Fantasy series, it takes a new spin in an attempt at something fresh with minigames galore, an impressive card battling system, and a light-hearted story. The experience will last anywhere from ten hours just rushing through the storyline on up. With Wi-Fi battles increasing the need for newer and better cards, gamers will be playing the micro and minigames for hours constantly trying to improve their scores and complete their decks. Though the story may be short and shallow, overall the game has a lot of lasting appeal.