First shown before the Wii’s release, it wasn’t until more than three years had passed that Final Fantasy Crystal Chronicles: The Crystal Bearers actually launched. Square Enix was quiet about this game for long stretches of time, with rumors even spreading at one point about the game’s cancellation. However, it returned with an edgy new logo, which should have been the first sign. After finally spending some time with this mishmash of a game, wishing that the cancellation rumor had been true is one of the kindest things I can say.

The Crystal Chronicles series has broken into its own little world apart from the main Final Fantasy line. The prior games, with the exception of the simulation My Life as a King, have been single player adventures with multiplayer features and had really started to come into their own. Crystal Bearers takes it a step further by breaking away from that newly created mold, but sadly trips up and plummets down a path into something much more horrifying. Combat is mind-numbingly basic, the interface is awkward and unresponsive, the story is transparent, characters are vanilla, exploration is sparse, the world map is inadequate, music is directionless, and the voice acting is lacking. The Crystal Bearers is a hollow excuse for a game.

Let’s start with combat. The entire game feels like a tech demo, and an unfinished one at that, but nothing supports that theory more than the battle system. The main character Layle is a Crystal Bearer, which means he has a special power, in this case telekinesis. The entire system involves locking onto enemies or items with the Wii Remote and having Layle pick them up and throw them. There is no magic, he carries no weapons; it’s merely Layle and his telekinetic powers. But not only is combat overly simplified, it is also mostly optional. At no point during exploration does the player have to stop and do battle, so it’s completely fine to walk through an area and avoid all the enemies. However, if for some reason players do actually want to take the time to fight, be quick about it, because enemies are only available for a brief window of time before they simply vanish into thin air. 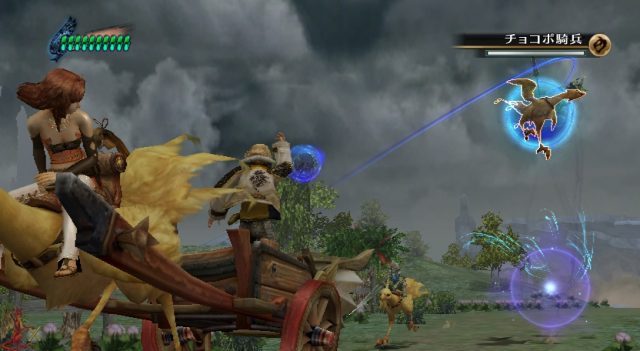 The only time that combat is mandatory is during a handful of boss encounters. These are few and far between, and mostly involve dodging around an area and tossing items at the boss. The game does offer up some variety in the use of telekinesis, but in the end all fights come down to the same tactics. A couple of these battle were an exercise in frustration, but thankfully there is a quick retry option upon losing, and often progress made toward defeating the boss is retained when restarting. On top of all of this, the Wii Remote’s accuracy is a problem. Selectable items on screen are not always easy to lock onto and many items have to be targeted for a few seconds before they are useable. Enemies and characters are constantly moving around onscreen, making this issue especially rough and leading to the controls greatly hampering the experience. The camera can be rotated around for a better view in most instances, but even that is slow and the D-pad mapping is an awkward reach for most players. One saving grace is that the game periodically autosaves upon entering certain areas, so it is simple to quit at a moment’s notice without losing much progress.

The story also does the game no favors. It’s nothing unusual to find a cliché story in an RPG these days, but the plot here just feels phoned in. None of the characters have any kind of backstory to them, nor do they have clear motivations for anything they do. Layle fights because he’s an uncaring mercenary with extraordinary powers, but decides at some times to help because he’s nice, then shifts back to his aloof self the next moment with an equal lack of explanation. Other characters just hate each other for no apparent reason, and since you cannot even talk to NPCs outside of cutscenes, it’s impossible to dig any deeper. Even when the story does pick up halfway through, it’s typical, transparent RPG fodder. Any time one of the characters start to get close to being personable, the game moves away from it and heads back into cliché territory.

For the first four hours, half of the game, it’s merely travelling from point A to point B to see the next scene before heading back to point A again. This seemingly simple process is complicated by a useless world map with no clear labelling of paths and locations. Players will be stuck exploring the world and following road signs to find the next destination. This wouldn’t be as much of a problem if the landscapes within these areas were remarkable at all, but they are not. Most zones are large and empty with the exception of items to pick up and throw, so prepare to spend a lot of time walking. Chocobos are available to ride, but sadly road signs cannot be read while mounted, and once dismounted the chocobo will vanish, leaving Layle on foot once again. A train is also available at certain points, but these are scattered far enough apart that they’re not very helpful. 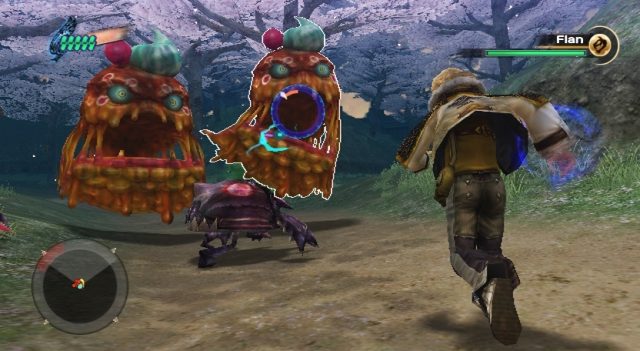 Where Crystal Bearers is lacking in combat and story, it features mini-games in an attempt to redeem itself. The majority of this title feels like a collection of these mini-games, and while that wouldn’t be all bad if they were fun, most are not. The game starts with Layle dropping from the sky and firing an oversized gun at flying creatures. After this he must fly an out of control, and horribly unresponsive, airship down a canyon while trying not to crash into the sides. Meeting certain conditions in these games will earn medals, similar to achievements, but these are completely useless other than for bragging rights. Some of the other games available include a rhythm-based ballroom dancing game, surfing, chocobo racing, and the overrated bikini butt-bouncing game. The bikini game doesn’t even allow the player to have control of the half-dressed females, merely the option to shake the platform to help knock the opponent off. While some of these were mildly amusing, none even came close to being enjoyable enough to deliberately attempt them again, which is an option later on.

The game’s visuals are easily the highlight of the game, but even the graphics are marred by lots of screen jarring in some areas. Character artwork is decent and most of the cast is fairly diverse, but there is an overabundance of recycled NPCs and enemies. Cutscenes have a decent production value and are the most impressive part of the game. Sadly, these are brought down by lackluster voice acting, especially from Darrel Guilbeau, the voice actor for Layle, who gives a dry and uninspired performance. The game’s soundtrack is also all over the place. Some tracks in the more dramatic moments are fairly touching, however there are other pieces that sound completely out of place. The greatest example of this is the twangy track “Catch and Throw” that graced the official trailer from last year, it’s back and as irritating now as then. The overall presentation is not as bad as the rest of the game, but is not enough to sugarcoat the bitter problems found elsewhere.

Whatever the story behind the development history of The Crystal Bearers, things clearly didn’t pan out. This game is a mini-game collection masquerading as an epic adventure, and it doesn’t even pull that off well. The battle system is practically pointless and the story feels like a hackjob, lacking any depth whatsoever. There is nothing to recommend about The Crystal Bearers, a shallow embarrassment of a game that takes any progress the Crystal Chronicles series has made and undoes it. Here’s hoping this game is completely ignored and the developers move back to the multiplayer roots of the series.