Roguelikes are the video game version of cheese, an ingredient which can work in one way or another with a great variety of foods, accentuating and bringing new flavor. However, just as in the food world, some gaming combinations take otherwise simple recipes and add too many ingredients. Fantasy of Expedition is one such concoction, taking elements and inspiration from so many sources that it misses the mark on what made those titles great in the first place. 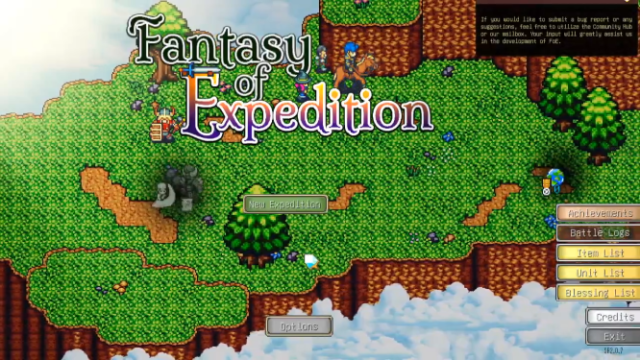 Fantasy of Expedition sees the player choose a class to begin a journey across worlds in order to undergo the Demon King’s trial. Initially only three classes are available to the player, but more can be unlocked along the way. The journey consists of moving from left to right across a desert map, stopping at nodes to fight enemies, test luck at slot machine chests, or receive blessings from sanctuaries. In addition to accumulating items from their encounters to test their mettle against the area’s boss, the player recruits semi-controlled allies to join the battles, adding a real-time strategy approach to combat though they only control their chosen class. This gameplay loop is reminiscent of some Flash games like Poker Quest or Crusaders of the Lost Idols and gives more depth than the free internet offerings and combines elements of many different sources; however, this is often to the game’s detriment.

Battles comprise the bulk of the gameplay and often feel like a clicker game. Playing as the Slayer, the player left-clicks to stab groups of enemies and fill their attack resource, while right-click depletes resources for greater damage and area of effect. Both mouse buttons at the same time further deplete resource, but give greater damage and area to the attack. The Artificer class, on the other hand, launches magic attacks at the enemy and must pay closer attention to accumulated mana as well as skill shots against moving targets. Ally units can be directed to focus their attacks on an area or be told to move to a different area, but only play an important role insofar as when they have all perished, the journey is done. 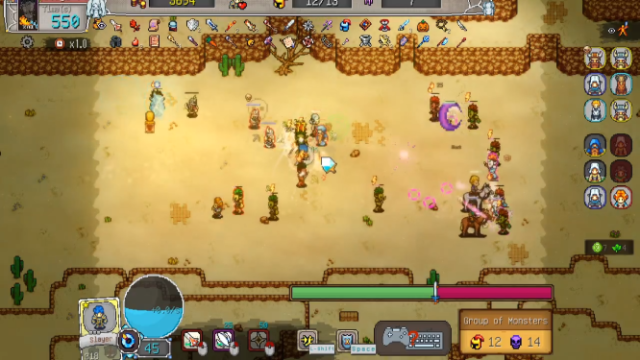 There are upgrade paths for both the player and ally units. Players may increase skill strength at dojos or through accumulated items. Allied units, while awarded via a gacha-like system, may be merged into upgraded units upon collecting three of the same type, as well as through different items. These items, similar to The Binding of Isaac or Enter the Gungeon, have different effects and rarities ranging from lowering enemy magic defense to adding a chance to inflict a chain lightning effect on allied unit auto-attacks. While most of the upgrades and items have visual effects on the screen, none of them feel like they have a noticeable impact on the actual game on their own.

The visuals are a mixed bag. On one hand, the sprite work for each of the allied units as well as the bosses looks well done, as the game follows the current trend of 16-bit visuals. On the other hand, none of the areas feel very distinct, as the same background is used for all overworld maps. During combat there is so much happening on-screen that differentiating between allies and enemies ends in a frustrated scramble of clicking on clusters and hoping attacks lands. This is all the more disappointing as the beauty of the ally unit sprite work is lost in the mess of pixels and only able to be appreciated on their character cards or while setting formations. 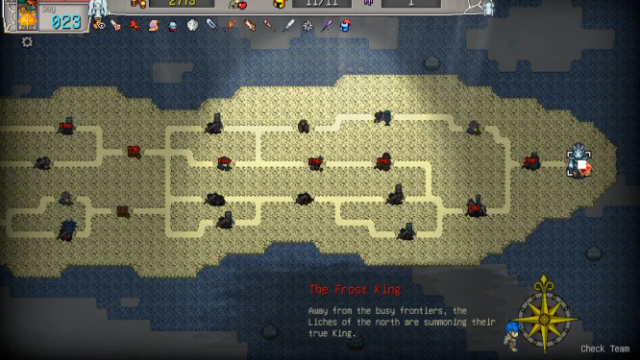 The game’s greatest fault lies in each run taking too long. Roguelikes are at their best in small, somewhat diverse chunks, offering familiarly differing experiences that allow players to use their skillsets and unlocked progression to get better at each time. Each journey in Fantasy of Expedition can take as long as three to four hours, with each run overstaying its welcome after two to three maps. The game allows saving in the middle of each run to ease the tedium and repetition, but this only does so much when taking into consideration that each run grants legacy points, intended to give minimal upgrades and unlocks towards future runs of similar length. The difficulty is customizable, giving some control to the length of each run.

The game’s sound suffers from the length of each run, as otherwise good music and audio tracks take their toll, doubling-down on the repetitiveness of the visuals in combat. Music that started out setting the mood turns to white noise amongst a cacophony of clicks.

Fantasy of Expedition is ambitious for its attempt to combine elements from real-time strategy games, roguelikes, RPGs, idle games, clicker games, and 16-bit nostalgia. However, the resulting product feels time-consuming and not rewarding in its power creep or challenge. The simple story is representative of the depth of each of these elements but also highlights where the game could shine if just a few of them were further refined or removed.

Just a mid 30's gamer from Texas with a love of strong stories and stronger characters.