We Didn’t Start the Fire

Shiro Games had an interesting idea for Evoland: put together a quick composite of RPG history that is also a playable game, and not simply a tech demo. Evoland does exactly what this idea would indicate, allowing players to blast through years of change in the genre. Even as a slim title that can be completed in under three hours, it manages to drag in a few spots though.

Evoland begins on a black and white screen with a player avatar rendered in Game Boy-level pixels only able to move to the right. Doing this opens a treasure chest that unlocks the ability to move left, and in that direction is found another chest with the ability to scroll between screens. The opening half hour of the game is very much like this, with the player constantly accessing new enhancements that introduce color, enemies, combat ability, a life bar, saving, and numerous other mechanics to the proceedings. The pace slows down after the polygonal era is reached, but new things are still being unlocked right up to the conclusion.

Combat takes place in several ways as Evoland progresses. At first it strongly resembles The Legend of Zelda‘s straightforward overhead action, but soon the protagonist escapes onto an overworld where random encounters that follow the ATB standards of multiple Final Fantasy games occur. These two styles alternate, with a few additions, for the remainder of the game except for one area that plays like Diablo instead. These titles are directly referenced in the credits, making it clear that Shiro Games knew what it was doing, and the variety in this short game helps keep things from getting stale. Combat is quick and to the point, without extra options to vary the means employed for beating down adversaries, but it gets the job done effectively in a game of this size. 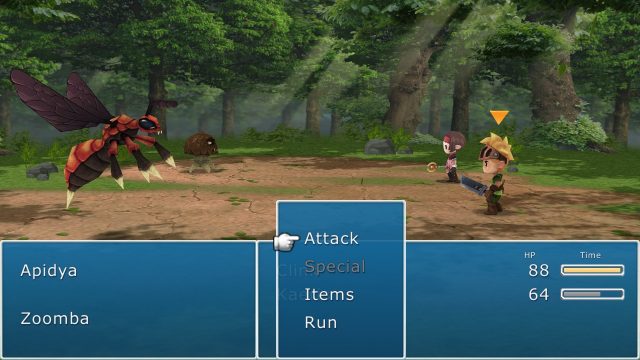 Even with its brevity though, Evoland manages to linger a bit too long with some areas. A couple of dungeons inspired by The Legend of Zelda are included, and wandering through the whole of the locales takes a significant amount of time for such a short game. When random battles switch to polygonal creatures reminiscent of PlayStation-era Final Fantasy titles, they come with obnoxiously high encounter rates, as if to fully emulate that aspect of the RPG past. One short segment that forces the player to run around a town talking to every NPC for a fetch quest manages to be aggravating in its own right, though this admittedly is an accurate depiction of the genre staple.

Including a plot in Evoland was an odd choice of the developers, because in the early going only text that introduces new mechanics is displayed. The narrative which emerges is a clichéd one of an evil overtaking the world’s Mana Tree, and is personified by a nasty being who must be destroyed, along with a bland second party member to help out with exposition. Brevity would be a good point of such a tale, but even with the relatively small amount of text in Evoland several obvious typos appear to jar the player. 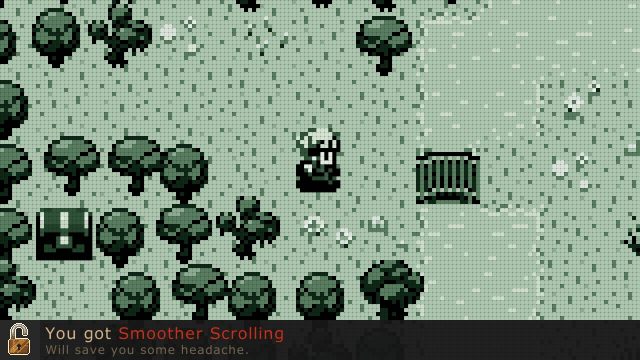 Don’t worry, the pixel count will go up real fast!

Evoland‘s visuals have a big job, covering the gamut from black and white 8-bit pixellation to smooth polygons that would fit in with current handhelds. While even the most impressive visuals showcases would not strain most current hardware, the variety depicted here is quite appreciable. Aurally the game is less impressive, although the shifts to new levels of synth complexity are noteworthy. Most of the music is solid without being memorable, although the random battle tracks differ by rocking rather well.

While it is very easy to die in the first few minutes of Evoland, before a life bar and saving are unlocked, afterward the game is not very difficult. Death is dealt with by tossing the player back to the last save point, but automatic saves are frequent enough to prevent much progress from being lost. Even doing every possible thing in the game to unlock all achievements will probably not take more than five hours, but some of these accomplishments are silly enough to be worth seeking out, and a significant portion of the game world is optional to encourage exploration at the conclusion.

I appreciate the novelty of Evoland and the quick trip down memory lane it affords. In no way is it an indispensable title that should be investigated by every RPGamer around the world, but its presence is a boon to those who would like a quick reminder of how far the genre has come. By having lackluster aspects it actually manages to more convincingly ape the genre than it otherwise would, so even the less-desirable parts may serve an inadvertently helpful purpose.