A Slightly Above Average Dream

Frédéric Chopin was a genius at the piano, and is known as one of the greatest composers of all time. He died in 1849 when he was just 39 years old. Something about Chopin’s incredibly memorable piano pieces must have possessed tri-Crescendo to set Eternal Sonata for the PlayStation 3 in Chopin’s dying dream, because it seems strangely random otherwise. Random or not, tri-Crescendo has created a unique setting for Eternal Sonata, and added a progressive action-RPG battle system to go along with it.

For those who want the basics of the storyline: the game takes place in a dream Chopin is having as he lies dying out in the real world. For a dream, the world is fairly normal, with areas typical to many JRPGs, and games in general. Atypical to Eternal Sonata‘s world are the beautiful graphics. Lush, detailed environments are complemented by a beautiful color palette, making vibrant, green fields stand out against clear, blue skies. Players will journey through lava filled caves, snowy mountains, swamps, and various towns, all detailed to the max and gorgeous to look at. Characters and enemies themselves are cleanly modeled with a cel-shaded style.

The battle system is the real standout aspect of Eternal Sonata. Enemies can be seen as the player explores the game world, and the player can gain an advantage by moving into them from the back, although this works both ways. Once contact is made, battles load quickly into a small 3-D arena which has areas of both light and shadow. Depending on the environment, certain battle screens will have smaller areas of one or the other, such as a cave which would have more areas of shadow. Characters’ equipped special moves each have an affinity of light or dark, and to use a special move a character must be standing in the associated area of light or shadow. Enemies cast a shadow themselves, and some may even have a torch burning on their tail, generating light beneath them. Most enemies have light and dark forms which they morph into as they move between lit and unlit areas.

Eternal Sonata throws out the traditional magic/special point system and instead uses the Action Gauge, a preset amount of time with which characters have to act. On each individual character’s turn, players will run across the battlefield to attack, performing combos by mashing the attack button or by using longer, time-consuming special moves until the Action Gauge runs out. A battle party consists of three of the eventually 12 playable characters, each with their own unique weapon combos and special moves. The length of the Action Gauge and amount of Tactical Time (the time before the Action Gauge starts to run down) varies depending on which of the six Party Levels the player has reached. The player’s Party Level will increase at pre-defined points in the game, altering various aspects of battle. Echoes also come into play at a certain Party Level, which are basically combo points that are consumed when a special move is used, making the special move stronger and allowing for special move combos at higher Party Levels. 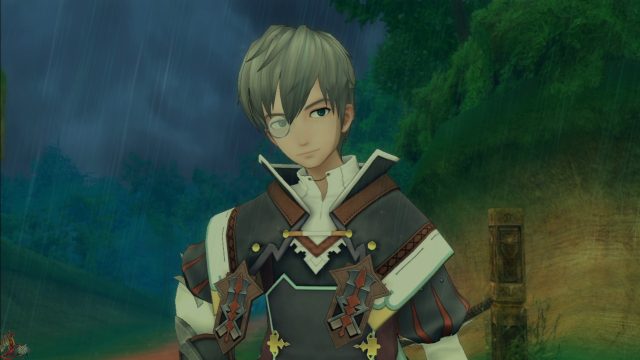 An important part of Eternal Sonata‘s battle system is the “chance” defense, a timed button press which is indicated to the player by a quickly appearing icon above a character’s head when he or she is being attacked. If the guard button is pressed in time, the damage done to the character will be vastly reduced. For this reason, positioning in battles is important, since the “chance” defense cannot be used if characters are being attacked from behind. One gripe with this system is that it becomes almost too necessary for survival in later parts of the game, especially when fighting bosses. This does create an environment where the player must always be on his toes, which can positively add to the challenge, but sometimes the window for “chance” can be very short and feel unfair.

All of these aspects combined create Eternal Sonata‘s progressive battle system. Battles are very fun, and just as battling may start to get overly tedious, players will usually hit a new party level or reach a new area where light and shadow are in different quantities. Despite the progressiveness of the system, battles still get repetitive. The only customization options are through equipping weapons, armor, two accessories, and special attacks. While accessories and equipment offer useful abilities, and light and dark special moves offer some variety, neither offers a whole lot of true depth to the battle system. Each enemy has four or five different attacks, but enemy types are reused early and often and most areas usually contain only one or two enemies to fight. Enemies can be avoided, but some areas make this impossible due to the small pathways used. While leveling up has a noticeable effect early on, many players may want to skip the majority of battles in longer dungeons as the effect becomes much less so as the game progresses. Leveling up does provide new special moves, but hardly often enough to encourage grinding for.

Eternal Sonata‘s basic premise is highly inventive, almost randomly so, but the game fails somewhat with its execution of the concept. More could have been done with the concept of a world existing in a dream. Eternal Sonata‘s game world is creatively designed, but many areas are still typical to the genre. Characters are one dimensional and often think about one thing throughout the entire game, repeating it through the various, and sometimes lengthy, cutscenes. The cutscenes often don’t serve to reveal much about the story. Instead, characters say what they typically would in certain situations, and then a battle ensues. Some cutscenes can be draining and boring due to their slow pace and lack of dynamism. Thankfully, the ending cutscene is the most compelling of the whole game, evoking emotion and creating the sense of wonder that would be expected from a game with this type of setting.

Music is a strong suit for Eternal Sonata, and not just in the memorable, well-composed score. The theme of music can be found in nearly every aspect of the game, such as in the design of scenery objects, in character names, and in musical puzzles. Certain points of the game pause to give the player a historical interlude about Chopin’s life, during which one of Chopin’s famous piano pieces is played. These pieces can be listened to in the menu once the scene has been viewed, along with every other song played in the game up to that point. 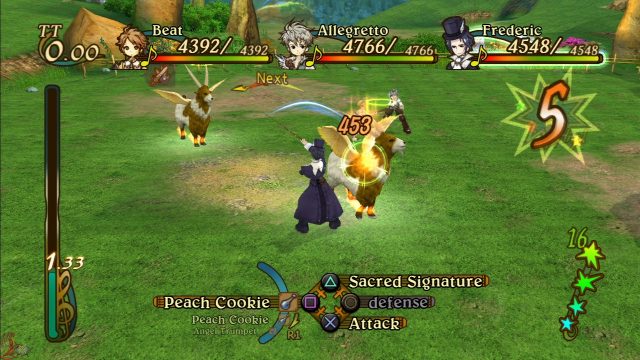 These goats come from heaven. You must murder them anyway.

There are two mini-systems in Eternal Sonata which also follow the path of being interesting in concept, but missing the mark in execution. The Photo system allows a particular character to take photos on the battlefield which can then be sold to merchants. Depending on the quality of the photo, the player will get more money for them. Under certain circumstances it is possible to get so much money from taking photos that it becomes unnecessary to take them anymore, not to mention that money is not a major requirement in the game anyway. It wouldn’t have hurt to provide more bonuses for taking high rank photos other than money.

The second good concept with failed execution is the Score system. Score pieces (short musical stanzas) are located throughout the world, along with NPCs who will play a session with you. Certain score pieces played in sessions with particular NPCs will trigger a B, A, or S-ranking, providing a special item to the player. The system is fine at the beginning of the game, but when the player has 10-20 score pieces it becomes tedious and annoying due to the method required to play each session with an NPC, and also because the player is given no indication as to what scores will work best. Some S-rank sessions can only be played on a second playthrough of the game.

And most Eternal Sonata players will probably not want to play through the game a second time anyway, specifically deemed an “Encore” play-through, even though there are a few extra things to do. The game’s story is extremely linear, rushing the player through on one path for the entire game. For those that have already played the Xbox 360 version, the PlayStation 3 version does come with a few additions: extra areas to explore, new bosses to fight, two new characters to play as, costumes to find, somewhat altered/multiple endings, new music, and new quests which expand the storyline somewhat. These additions are welcomed, making the PlayStation 3 version of Eternal Sonata the premiere version to buy if the game hasn’t been experienced yet, but nothing has been added which would warrant a second purchase.

Chiefly, Eternal Sonata is an enjoyable experience, if somewhat repetitive and bland at times. As it is, the game could be considered more of a casual RPG due to its lack of customization options and linear storyline. With a little more depth put into all of its aspects, Eternal Sonata could have been so much more, but is still a worthy purchase for those interested in the setting or in a simple RPG which is fun in short bursts.