1000 years ago, at the end of the First Age, Zaramoth the Unmaker and his sword forged out of the raw power to dominate fought a climactic duel against Azunai the Defender and his shield. When the sword of Zaramoth struck against Azunai’s shield, which was itself forged with the raw power to protect, it evoked a terrible cataclysm that altered the shape of the world and shifted the stars in the sky. Dungeon Siege II picks up the tale in the present day, at the end of the Second Age, where the sword and the shield have it in their destiny to meet once more.

In addition to having a riveting opening for practically any game, the opening scene of Dungeon Siege II has the benefit of sitting directly on top of the story and mythos of its predecessor. Although the Kingdom of Ehb is far away from the central action, the hero worshipping of the Azunites, the legends of the dwarves, the history of the elves, and the mystical flow of energies that run beneath it are all present in the greater continent of Aranna. The wide array of story arcs and sidequests that the game offers based on these preexisting elements are an excellent source of entertainment to divert you from the fifty plus hours of the central plot around which the game quests revolve. Sadly the very reliance upon a continuous storyline that gives the game its robust nature also prevents the game from venturing too far off the beaten path. This relative lack of originality does less to hurt the game than to help it, but it does make for easy comparisons, on a number of issues, between both titles in the series. 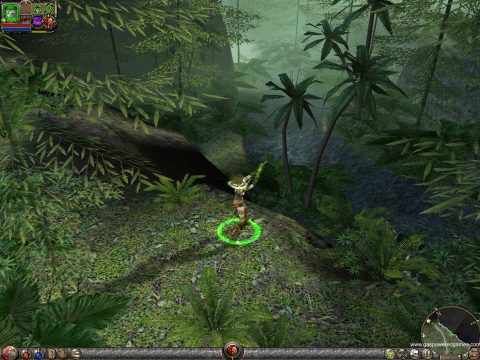 The quality of the graphics that guide you through your journey is quite excellent, including the extremely colorful and encroaching jungle of Greilyn Isle or the dusty, brown bleakness of the Azunite Desert. Not quite so detailed or fantastic are the character models, which suffer primarily from the comparison that has to be made between them and the backgrounds and environments in the game. Albeit not bad, the level of detail is simply not what a great many other games have recently begun to give their characters and NPCs.

Quite unfortunately the musical score of the game tends to be more ambient than Jeremy Soule’s usual work. This is not to say that the music is bad or that none of it stands out to engage the player through moments of story exposition, but on the whole it essentially boils down to well arranged filler. Character voices exist and are generally good for all of the playable characters and a great deal of the NPCs that you’ll encounter throughout the game. In many cases, similar to Private Actions in Star Ocean: The Second Story, these voices carry the character development aspect of the plot by helping to express the emotional relationships between the myriad playable characters that would otherwise never become apparent.

Despite the massive improvements over the menus and equipment system of the original Dungeon Siege, the interfaces leave a bit to be desired. There still exists no way to quickly and easily transfer more than one item at a time between characters, the massive number of “must use” quick keys is even more of an issue than in Dugeon Siege II‘s predecessor, and although it is much easier to transfer spells between books than before, an option to transfer more than one spell from one book to another would have been an excellent addition to the game. One aspect of character growth that is new and greatly appreciated over the original is the addition of skill trees. Every time a character levels up they are given a single point to put toward things like enhanced armor skill, increased spell casting speed, damage resistance, the ability to ricochet attacks from one enemy to another, and so on. By putting points into these skills you power up and unlock your Special Attacks and other latent combat abilities. 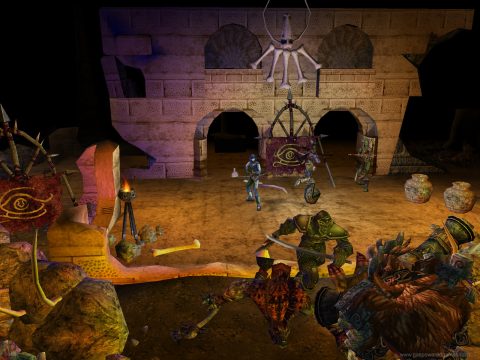 A Dungeon Under Siege

In what is fast becoming an RPG standard, Dungeon Siege II features the ability to play the game a second and even a third time with the same levels, skills, and equipment that you complete the game with the first time. Unlike a good portion of the games that offer similar features, the difficulty leaps enormously from one difficulty setting to the next with your main counterbalance being the ability to purchase more character positions within your party. With each character you add to your roster however, the number and relative intelligence of your enemies also increases. It should be noted that it might be possible to complete the game without ever adding anyone to your party beyond the hero character, but such a task would not be at all easy or even very rewarding except for people who really want to have “done it all” to get their money’s worth. In much the same fashion, it is possible to use the built-in GameSpy software to play the game over the internet with any number of your friends in a private instance of the game world where you can run rampant to your hearts’ content.

That brings us to the aspect of the game, and practically every other action RPG in existence, that you will be devoting your fifty hours of play time to: combat. Although generally the same as any dungeon crawler in the vein of Diablo, Dungeon Siege II is just different, fast paced, and customizable enough to catapult itself directly into the top five list of battle engines in games like it. By right clicking on an enemy just once, you will attack that creature one time, whereas if you hold the right mouse button down and track with a creature you will attack it until it lies dead at your feet. You and your enemies can all use Combat Magic — such as lightning and fire, Nature Magic — primarily useful for stat augmentation and healing, and Melee or Ranged attacks depending on their weapon of choice. One bonus that your party receives that your foes do not is the ability to use Special Attacks. These range from projecting an aura of invulnerability to spinning your sword in a massive circle to throwing dozens of ranged weapons at once, and nearly every one of these special skills does in the range of 1000% of your typical attack damage for a short period of time. Obviously these abilities would make the game exceedingly easy if you could use them all of the time, and so their power is compensated for in your having to charge them through dealing regular attack damage.