Dragon’s Dogma was well received when it came out almost a year ago. Well enough received to warrant Capcom stating it would become a franchise for the company. However, before a second full game, Capcom decided on a re-release featuring a fairly substantial expansion pack. As it is, Dragon’s Dogma: Dark Arisen is a perfect reason for fans of the original to get back into it, and for those who missed it first time around to give it a go.

There are some technical improvements to the original game, but content-wise it’s untouched. The expansion’s main purpose is to simply add more Dragon’s Dogma gameplay, but this is far from a bad thing. The graphics have been given a nice higher-definition touch-up, and some of the frame rate issues that plagued the original release on PS3 have been dealt with, although there are still a few instances of slow down — particularly when a lot of magical attacks are flying around. Dark Arisen also includes the hard mode and speedrun modes added to the original game as DLC, further helping to add some challenge, although hard mode requires players to start from the beginning while the other two difficulty modes can be switched on the fly. Overall, the vast majority of what has been said about the original release still applies here, so this review will look mostly at the game’s new content, Bitterblack Isle.

Those who played the game before are given the opportunity to import their previous saved data, being rewarded with a highly useful Eternal Ferrystone and 100,000 Rift Crystals, the currency used to hire higher-level pawns. If the player’s save file is a completed game they may need to start a new game plus, but will only need to play for a very short time, up to the first encampment, before Bitterblack Isle becomes available. There are plenty of new weapons and gear to found, although most of these are initially obtained as unidentified cursed items, which require returning to the entrance and parting with some Rift Crystals so they can be uncursed and identified. These are further complemented by new skill upgrades and augments, and the ability to further enhance any Dragonforged equipment (when defeating a dragon there is a chance that items the Arisen has equipped will become Dragonforged, a level of enhancement otherwise unattainable). 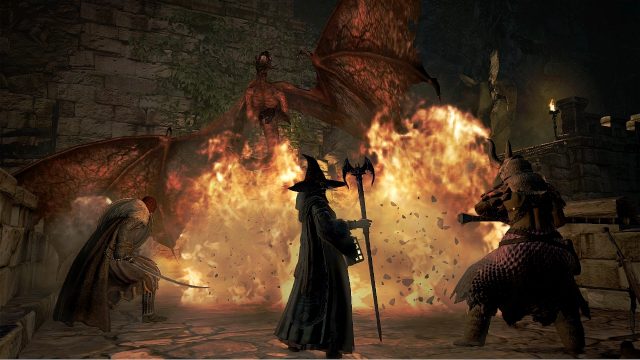 Friendly-fire is, thankfully, still turned off.

Players will know the expansion is available when during the night a mysterious young woman named Olra appears at the docks of Cassardis, the Arisen’s home town. She asks for the Arisen’s help, because that’s just the sort of thing the Arisen does, and they journey to Bitterblack Isle, where many fearsome creatures await. The story for Dark Arisen is pretty light, Olra’s request is mostly there to give the Arisen an excuse to go off and beat up dangerous monsters. Players may receive one or two answers to the many questions that arose during the main game, but even with Dark Arisen the world still has many unexplained aspects. There’s a decent amount of background content that details some previous Arisens’ experiences, which appears on an epitaph near the entrance, although players will need to find the individual broken-off sections scattered throughout the dungeon before they can be read.

The stars of Dark Arisen are the new enemies and Dragon’s Dogma‘s excellent battle system. Bitterblack Isle contains around twenty sections for players to explore, including a few major boss battles at regular intervals where players must take down a particularly large or tough opponent to progress. A lot of new opponents, albeit some are tougher variations of previous enemies, make their home in this dark labyrinth, and some provide grueling yet epic fights for the Arisen and their pawns. One of the complaints about the original game was the late-game single-player story content was too easy. This has certainly been addressed in Dark Arisen, with some opponents that can trouble even the highest level players if they’re not careful. Players will want to be around the level fifty to sixty mark when starting, and even then there will be opponents where sneaking, or even sprinting, by is recommended the first time around. For example, players will find running away from Death the first couple of times he appears to be a more than wise tactic.

Continuing the theme from Dragon’s Dogma, players need to make use of elemental or physical weaknesses, as well as taking advantage of specific weak points in order to defeat larger enemies. There are a few issues with some of the biggest enemies, particularly the forty-foot version of the Gorecyclops, but these mostly relate to the pawns’ behaviour. They (particularly mages) will sometimes stand in rather suicidal places and need the Arisen to come and revive them. This can be mitigated somewhat by selecting pawns more carefully based on their inclinations and for the most part they still do a very good job of providing advice and assistance in combat, but there are a couple of battles where their weaknesses become quite noticeable. 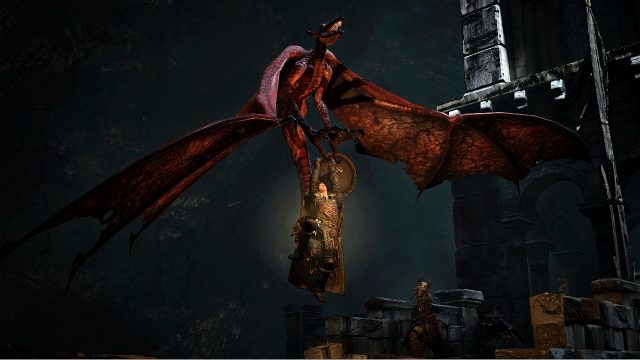 There is clearly no way this strategy could end badly.

Bitterblack Isle itself is very well designed. There is a bit of repetition in a few of the layouts, but it’s not too noticeable and variation still comes from the different enemies within each. It also helps that the different layouts are nicely varied, ranging from large arenas to narrow corridors and rooms, and ensure that the environment comes into play in combat. The always-night setting also instills Dark Arisen‘s dank theme well. It’s an unwelcoming place, but is full of character and very interesting to explore with plenty of treasure hidden away in the nooks and crannies. Some annoyance, which was also present but easier to ignore in the original Dragon’s Dogma, can come from those areas with water and where the ever-so-vital lantern risks being extinguished. This requires players to put it away then bring it back out to be able to see, but it’s still a relatively minor issue and doesn’t take anything away from the game.

The original Dragon’s Dogma took around forty to fifty hours to complete, and Dark Arisen should add up to another twenty hours for a full runthrough. Like with the original game, potential replayability is abundant. Once completed, there is still reason to revisit Bitterblack Isle. Each section’s enemies are mixed up on the second run to provide different battles, and there’s always the challenge of defeating any opponents left hitherto undefeated, and it’s more than likely there will still be lots of powerful gear waiting to be found.

Dark Arisen is definitely a play to Dragon’s Dogma‘s strengths and it turns out well for it. There is still work to be done for the series, particularly in bulking up the story and world, but there’s lots of highly addictive fun to be had from exploring Bitterblack Isle’s depths. This is a brilliant opportunity to delve back into Dragon’s Dogma’s thrilling gameplay, and certainly recommended for those who enjoyed the original release. Some, however, may be turned off a bit by the price for what to them is an expansion pack; the pricing at the time of release varied quite heavily between regions despite the simultaneous worldwide release. But for new players, this is an excellent opportunity to get the definitive version of an already great game.