Dragon Quest IX: Sentinels of the Starry Skies is the first original mainline Dragon Quest series entry to be released on the Nintendo DS. While to some this might seem like an odd decision, for Square Enix’s flagship Japanese RPG series it really makes perfect sense. What system is more widespread than the DS? And what better way to ensure the game spreads like wildfire, at least in Japan, than to add a local co-op mode? But how does all this content transfer to the American audience, and how does the game’s single player content hold up? The answer is not as simple as it might seem.

As is typical with Dragon Quest, the main character is mute, though unlike prior games in the series players can now create a unique design for the hero or heroine. Players take up the role of an angel-like guardian who, after a few story events transpire, has fallen, wing-less, to the world below. From there, the hero must travel the world helping those in need, in an effort to rejoin the heavens. It’s not just the hero that is player-created though; all party members are forged from scratch as well. There are no unique story-based party members this time around, which sadly leads to a bit of a disconnect with the plot, though thankfully the supplementary story characters help to give the world life.

Dragon Quest IX features a world with a focus on its inhabitants and the problems it is facing, rather than strictly being a character driven game. Some might find this off-putting, but the little vignettes offered throughout are brief, endearing glimpses into the world the hero is trying to save. Lots of these mini-stories are actually rather tragic and dark, which is fitting due to the character often dealing with those who have passed on. The overarching plot is not really a focus until much later in the game, but it all blends together well enough despite being segmented. 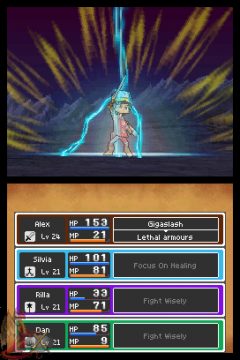 The combat system in Dragon Quest IX makes few new strides, as the turn-based system is pretty standard. Characters are assigned to one of six vocations at the start, though more are unlockable as the game progresses. Upon leveling up, characters earn skill points which can be distributed into weapon or vocation-specific skills. Players can eventually change up classes, transferring over all selected skills. However since spells are level specific and not available via skill points, these are not available when changing classes. It’s a robust system, though it has some minor annoyances. For one, when upgrading skills, it’s not possible to see what the new skill does until after it’s been selected. This issue might leave players hoarding skill points, unable to decide on how to spend them. Thankfully, points are readily available by swapping to a new class and leveling it up. Another oddity is the fact that it’s totally possible to swap to a new vocation, toss a lot of points into that class’s skill area, and swap back without even doing anything with it. This isn’t a major complaint, but it just seems odd.

Now while the battle system was initially envisioned as open world where enemies could be encountered and fought in real-time, that was ditched in favor of enemies visible on the world map only. This is nothing new for RPGs, but it is for Dragon Quest, and the game handles it very well. The game’s spread of enemies is wonderfully balanced and never seems unfair or overwhelming. When all of the areas of combat combine, it creates a very simple, yet addictive battle system with more freedom than prior Dragon Quests. So despite its lack of originality, the combat in Dragon Quest IX is really solid and offers enough variety to make things interesting.

There are some interface issues with Dragon Quest IX that might bother some, but that actually work quite well in practice. Saving is still only available at a church, but that’s a decent trade-off to never having a progress-losing death. Being kicked back to the church with half gold is much more palatable than losing hours of work, and even the gold loss is also mitigated by being able to leave that hard earned cash safely in a bank. It would be nice to have more banks in the world instead of having to zoom back to the only one in the game, however. Thankfully, the game does feature a quick save option, so at least players can cease progress at any time.

It is a little annoying to only be able to check experience point progress via a priest or church, but that’s not a major problem. However, when changing classes, players can only do so at one location until near the end of the main story. One thing that is usually an irritation when changing jobs is reequipping characters, but Dragon Quest IX fixes this by remembering what was equipped when changing back to a prior job and reequipping it if possible. It’s a small feature, but one that is very helpful to have. As much as some of these aspects seem odd and out of date and are often complained about, they aren’t a major inconvenience in this game due to the addition of systems like free fast travel between towns. 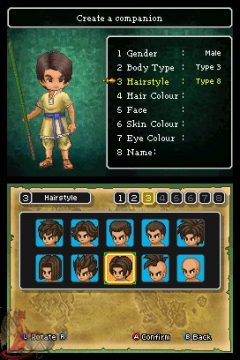 Visually, Dragon Quest IX is a very attractive DS title. While it rarely make use of fancy CG scenes other than during the intro and a few select places throughout the story, it doesn’t need them. The story is told mostly through the in-game engine, and it does a great job with that method. Enemies and environments offer a lot of variety, even with a lot of monsters doing palette swaps. There is a decent variety in character creation, animation, and equipment options that adds to the unique graphical design of the game.

The soundtrack is also a pretty decent offering, though it’s not outstanding. Most of the music serves well as background music, though few pieces really stand out on their own. Some, especially the battle theme, get old fairly quickly. Thankfully, nothing else gets reused too often and there are no other sound effects that are bothersome, so the game’s soundtrack and effects serve the game well enough.

It’s easy to see that the whole point of having a customizable main character and party members is to play into the game’s multiplayer features. It’s a feature that is local-only, so not easily accessible for all, which is a huge missed opportunity. While it might seem like this focus toward multiplayer could slight the single-player experience it truly doesn’t, as the main story is easily a forty or more hour experience by itself. After finishing the main story, there is plenty of additional content to explore for many more hours. The game also features a Wi-Fi accessible shop called DQVC in which players can download rare items to purchase each week, as well as finding new guests from other Dragon Quest games who stop by to give presents. There are some great additional features available here, though it’s a shame that not all are as easy to take advantage of in North American areas.

While Dragon Quest IX might not be the grandest and most glorious RPG out there, it is surprisingly addictive. It features many Dragon Quest staple concepts that seem easy to complain about until put in the proper perspective, at which point not only aren’t they an issue, but the ideas are rather forward thinking. Those looking for a character focused narrative should shy away from Dragon Quest IX; it doesn’t have one. If you are a gamer who enjoys trying out new classes and skills in varying combinations, then this might just be right up your alley. The game has a lot going for it and even more potential that just cannot be tapped well enough in North America, but despite what it cannot do, it’s a solid, if subdued, experience.