The Dragon Quest franchise has had a fairly uncertain fate in the West over the last few years. With the localization announcement of Dragon Quest Heroes: The World Tree’s Woe and the Blight Below, fans were thrilled to see the series resurge, even if the game isn’t exactly a main entry. What can fans expect from a game with the skin of Dragon Quest and the bones of Dynasty Warriors?

The story of Dragon Quest Heroes begins with two captains of the Guard, Aurora and Luceus, and a street festival. In this world, humans and monsters live in harmony, until the last surviving Child of Darkness disrupts the balance by casting a spell over the festival. Monsters have turn on humanity, and the World Tree that protects both humans and monsters goes out of balance. It is up to Aurora and Luceus to restore order, especially when they learn that they are the Children of Light, defenders of the World Tree Yggdrasil. The pair cannot take on this daunting task alone, and enlist in the help of former Dragon Quest heroes and heroines who happen to have fallen into a time slip, and arrive in this strange new world.

The story presented in Dragon Quest Heroes is a take on the classic light and dark trope. While this trope is often overdone, there’s a genuineness in Heroes‘ overall approach that “the power of friendship will always prevail,” making it delightfully campy. It also helps that the game has a strong localization, and the writing for each of the characters is a delight to read. There’s a real sense of playfulness, from Yangus’ cheeky Cockney accent to Healix’s sweet slime puns. However, while the majority of the story is great, the game pads things out somewhat, particularly around the twenty-five hour mark when one thinks they are at the final boss, only to have to do another rally of battles as a fake out. Still, padding aside, narrative is everything one would expect from a Dragon Quest game: a simple storyline coupled with strong writing to enhance the world building. 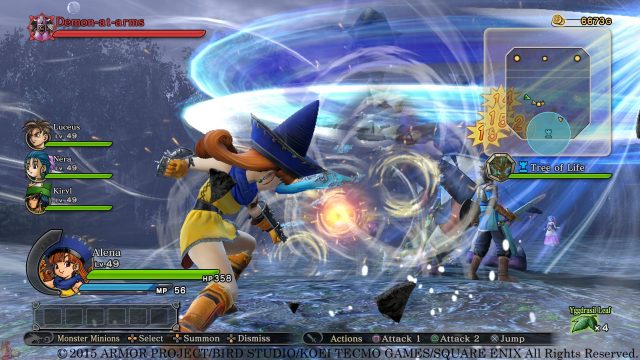 While one would think that Heroes is merely a Dragon Quest skin on top of Dynasty Warriors gameplay, this can really only be said for the game’s combat. Even then, Heroes manages to shake up the musou style formula by incorporating party-based gameplay, allowing players to take up to four characters into battle. Furthermore, players can cycle through the party members using L2, and are not restricted to simply using the hero. The game encourages party experimentation, as each of the thirteen characters has their own unique playstyle, as well as their own set of skills which can be upgraded as they level up. If a player does not like how they have allocated a character’s skills, the priestess on the Stonecloud can reset the skill points for a small fee.

On top of the character’s main abilities, they can also release a high tension attack called a coup de grâce. In this state, a character is temporary invulnerable to enemy attacks, while their speed and attack power have been super charged. Once the timer on the coup de grâce expires, the character unleashes a deadly finisher to top the attack off. Each character has their own unique finishing move, though some characters will have a much harder time filling the gauge than others.

Battles in Dragon Quest Heroes are fast and frantic, and this is where the Dynasty Warriors aspects shine through. Players will mow down hundreds of enemies in an attempt to complete whatever the main quest objective is. In order for the floods of foes to stop pouring in, the player must find the Mawkeepers on the map and destroy them. Sometimes objectives can also change mid-battle, so players need to stay on their toes during the heat of battle. Players can also recruit monsters during combat by collecting monster tokens. Sentry monsters help the characters on the field by attacking other monsters, while Savior types can heal or use a special ability. Moreover, the game has such a clean interface that it’s easy for the player to swap between summoning monsters, using their special abilities, or tossing out healing items. Maps are easy to understand, and it’s next to impossible to get lost in the environments. All these elements that have been described create a wonderfully cohesive combat system, and being able to use monsters or swap party members on the fly is a refreshing take on the musou formula that also feels distinctively like Dragon Quest. 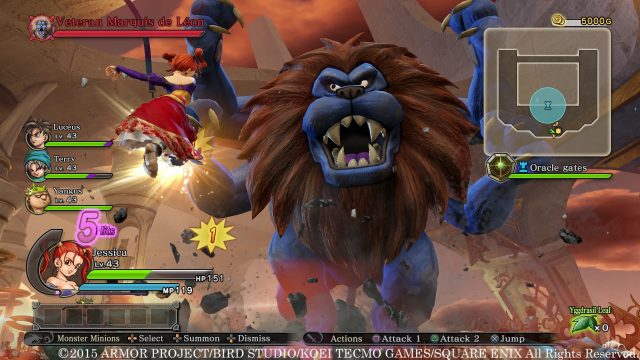 You must avenge my death, Kimba… I mean: Simba!

Dragon Quest Heroes also adds tons of secondary content in the form of side quests. While side quests are not mandatory, they are worth doing for the variety of perks they provide in the form of a longer monster meter, larger bag capacity, and more healstones. The downside to the side quests is that they are horribly unoriginal, mostly consisting of escort missions or killing all enemies. What’s worse is that they don’t provide an adequate challenge, making every quest feel quite dreary. Many of the main quests have a bit more variety in terms of the completion tasks, so it’s disappointing then that it didn’t carry over into the side quests.

In terms of visuals, the majority of Heroes is stunning. The cutscenes scream with vibrancy and gorgeous animation, and Akira Toriyama’s character designs simply pop with personality on screen. While the majority of areas are well detailed, they are uninteresting to explore. It’s sad that though the environments are nice to look at, they lack at that they lack any sense of uniqueness outside of “token desert area” or “generic volcano environment.” While many of the classic Dragon Quest tunes make an appearance in Heroes, a lot of the game’s original music is quite pleasant to hear. Both the English and Japanese voice acting is quite great, though having their in-battle voices only able to come through the PlayStation 4 controller’s speakers is a bit of an odd choice on the developer’s part.

If I am being frank, I was expecting a fan-servicey mess from Dragon Quest Heroes. What I got instead was a game that borrowed the Dysnasty Warriors formula and transformed it into something that is distinctively Dragon Quest in so many ways. While musou-style games can be hit-or-miss, I appreciate the amount of effort and thought that was put into the development of Dragon Quest Heroes, as it showed a careful marriage between the two franchises. If you love Dragon Quest, this game is fan-service with a smile, and if you like musou games, then this one is quite the breath of fresh air on a stale and overdone formula. After completing the game, all I want more than anything now is to see the sequel get localized.