DRAGON: A Game About a Dragon Review

Games With Dragons In’s first game, DRAGON: A Game About a Dragon, is about a dragon named Dragon. His girlfriend and treasure have been taken by the king. On account of being such a stand-up mythological beast, it’s up to Dragon to rescue his two true loves. Along the way, he battles marching bands, makes friends with a bunch of stoned wizards, and meets an evil tree. This is a silly game with a lot of indie personality. Its scenarios are charming, like stories told to a whimsical-but-precocious child. Fittingly, Dragon’s world is drawn in crayon and pen. Watching the game is a gentle, nostalgic pleasure like having your very own magical coloring book. The gameplay itself isn’t as transformative, but neither is it marred by obvious holes. The entire package is like its protagonist: relaxed, a little goofy, but sloppy on the details.

Dragon’s adventure is a side-scrolling platformer with RPG-style character advancement. As Dragon collects treasure, he can spend gold to advance his attack, defense, and support stats. Attack increases claw power and breath weapon duration, defense increases HP and damage resistance, and support increases flight duration and miscellaneous buffs. Leveling up is a quick, comfortable process, but it’s worth spending extra time on the level-up screen. It’s based on a Dungeons and Dragons character sheet in a cute, playful way. 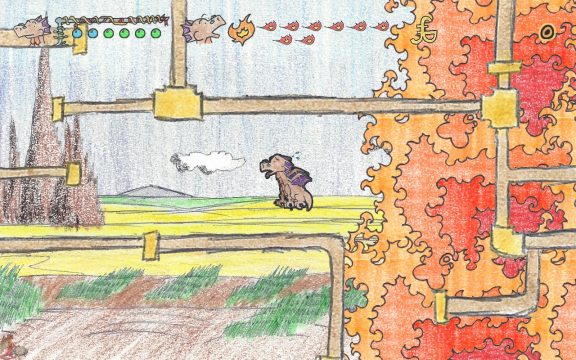 Dragon’s gold-based advancement is funded by finding rare treasure. Most of these treasures are hidden in well-guarded areas of a level; others require interacting with the environment by using Dragon’s elemental breath. Uncovering the interaction that reveals a piece of treasure generally makes sense (e.g. fire burns plants, acid melts rocks), but there are a handful that require the shotgun approach to solve. Not all of Dragon’s treasures are just shiny rocks. Some of them teach him how to sharpen his claws or spit gobs of not-fire. Electric breath, which powers mechanical devices, and friendship-promoting magic breath are the two most creative powers. As Dragon explores and gathers wealth, the treasures are transported to his home. Despite the game’s brief duration, there’s a strong sense of progress found in decorating a cozy lair with furniture, piles of gold, and Xenogears-themed READ posters.

Little touches like Dragon’s bookshelves and favorite books adds further shading to his already colorful world. The vibrant crayon graphics pair well with the storybook interludes to share Dragon’s story. The different stages, which are accessed through an overworld map, cover platformer basics (e.g. forest, castle, beach, ship), but their inhabitants (especially the bosses) and the overall style give them a strong sense of place. Unfortunately, the graphics’ layering occasionally makes it difficult to tell how to interact with different planes. The distinction between foreground and background isn’t always apparent, leading to visual confusion and missed jumps. Thankfully, death is only a minor setback. It’s a well-known fact dragons are very ancient and have infinite lives. 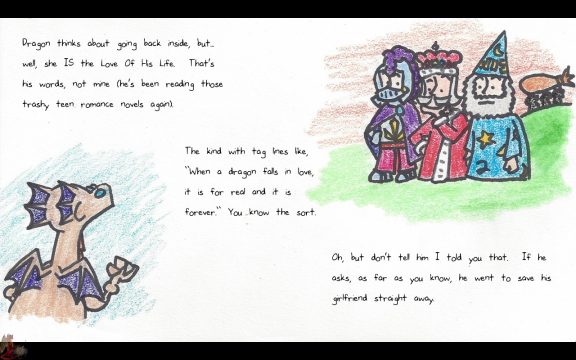 Dragon’s secret is safe with us.

The legendary resilience of dragons is a useful counter to DRAGON‘s less charming elements. For example, the jaunty chiptune music doesn’t fall on the same side of heart-warming as the graphics. Furthermore, it’s possible to reach the final boss without finding the acid breath necessary for victory. The necessity of this attack isn’t revealed in-game, except in the big jerk’s apparent invulnerability. On the mechanical side, Dragon’s hit detection can be uneven and slowdown isn’t uncommon. Combined with the foreground/background issues, the game can feel loose. During most levels this isn’t a deal-breaker, but boss fights are challenging enough as they are. Learning the patterns of these big guys is necessary for survival, and precision is of the utmost importance.

DRAGON: A Game About a Dragon is a short, silly romp. It can be completed in five to six hours, although some of the more difficult achievements will take a few more hours — or old-school reflexes. Judging a book by its cover is a questionable habit, but in this case is a useful tool. Gamers who appreciate DRAGON: A Game About a Dragon‘s visuals will probably appreciate its humorous writing and gentle exploration while forgiving its brevity and roughness.

Tags: DRAGON: A Game About a DragonGames with Dragons InPC