Doraemon Story of Seasons: Friends of the Great Kingdom Review

A Dream of Giant Veggies in the Sky

When Doraemon Story of Seasons was released in 2019, it was a pleasant surprise. Doraemon has been around longer than I have been alive, and the idea of having a Doraemon and Story of Seasons crossover was unexpected. While the first game had some issues in terms of explaining quests and pacing, it’s nice to see when a game learns from its mistakes. Doraemon Story of Seasons: Friends of the Great Kingdom is a delightful sequel that farming sim fans will enjoy, with lots of new activities and a solid story that isn’t exactly original but is a ton of fun.

Our story begins with Noby, his parents, and an argument about unfinished homework. Rather than deal with said homework, Noby, Doraemon, and their friends set off to a new planet they believe is uninhabited. It turns out, however, that it is home to a variety of unique races. Once there, they meet an injured boy, Prince Lumis, whom they help; in exchange, he gives them a tour of the planet. They meet Lumis’ mother, the Queen, who takes Doraemon’s gadgets. Luckily, Lumis offers them a chance to work on his farmstead and if Noby and his friends can show how helpful they are to the kingdom’s residents, maybe the Queen will change her mind and return the gadgets.

The story in Friends of the Great Kingdom is the right kind of silly that one would expect from a Doraemon game. There are lots of misunderstandings, crazy gadgets, and entertaining moments throughout. The game also focuses on the power of empathy and the way friends will help out no matter how difficult the situation is. The game’s cast of characters is utterly adorable, and the localization features an upbeat tone that makes viewing story events all the more fun. 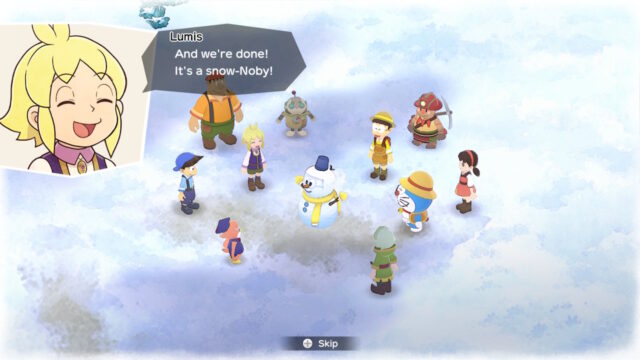 In typical Story of Seasons fashion, in order for the story to progress, Noby must befriend the villagers and help them with their problems. Much of the game is about befriending each person and figuring out how to solve their problem. The to-do list is a welcome new addition, that was not in the previous game, as it makes it a lot easier to know what progress has been made on each storyline, as well as keep track of how the main plot is progressing. The overall pacing of the game is a lot quicker, as the story doesn’t plod along at a snail’s pace or require players to be in a specific season or date to trigger events. These alone make Friends of the Great Kingdom a much more accessible and successful game than its predecessor.

Players will begin each day with a routine familiar to any with Story of Seasons experience: farming, tending to animals, and exploring the world. Many of the farming elements are super straightforward and controlled with ease, but the core of the game is not just about upgrading the farm but also completing tasks for the local residents. A bulletin board helps players understand the weather as well as take on requests. Requests require delivering a certain item, though they vary in difficulty as some require a crop or item that is out of season. Unless players have saved an out-of-season crop or have access to the Greenhouse, these requests cannot easily be completed. Noby can also work in the local mine and fish in a wide variety of areas across the planet and these are easily some of the best ways to earn money early on.

One core issue that farm sims often run into is keeping content varied — something the original Doraemon Story of Seasons struggled with. While Friends of the Great Kingdom has a ton of new activities for players to engage with, they become pretty forgettable after a while or happen too late in the game to be memorable. Noby can make pearls underwater or grow special crops in the sky, but both processes are long and time-consuming. New additions include being able to play the game fully in local co-op or having Noby invite different town residents to assist him in his day-to-day activities. Having a companion can be helpful in areas such as the mine, but for the most part the AI is pretty terrible at completing chores. The AI doesn’t actually have a lot to do and spends more time watching Noby complete tasks than contributing. 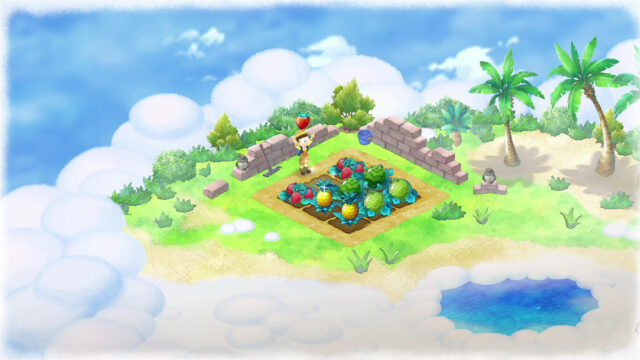 Harvesting veggies in the sky.

As the game progresses, Doraemon begins to receive some of his gadgets back from the Queen. Friends of the Great Kingdom has a lot more gadgets than the first game, though their usefulness varies. There are some great and practical items, like a gadget that allows Noby to toss out more seeds in a larger area, and more curious ones, such as a fishing rod that Noby can use on land. However, the majority of the gadgets don’t add a lot of value to the gameplay, so players are left with a lot of oddities that may not serve much of a purpose outside of a story event or two.

Friends of the Great Kingdom is a charming and relaxing experience, and that is very evident in its presentation. Every area in the game is visually stunning to explore, and bursts with vibrant colours for every changing season. The environments have a pastoral quality that provides coziness to each and every location. The game’s soundtrack also does a great job of accompanying its visual presentation, as many of the tracks are very calm and serene. While there aren’t a lot of tracks in the game, the ones that are there are catchy earworms that one can hum along to.

I was pleasantly surprised when I heard that there was going to be a sequel to Doraemon Story of Seasons, and Friends of the Great Kingdom was a decent experience overall. It’s clear that it has learned from the previous game’s mistakes, fixing pacing issues and offering more activities to keep the experience varied. Friends of the Great Kingdom is a great game to chill out with, providing so much whimsy and silliness that it’s hard not to grin like a fool when playing it. Even though not all of the new content was a home run, it feels like the Doraemon Story of Seasons series has finally found its footing with room to blossom even further.