Don’t Give Up: A Cynical Tale Review

Humour in video games is often difficult to pin down, especially the kind that includes self-insert. How a joke or line will land can turn an irreverent moment into a stilted mess. Comedy can be challenging because it is often hard to know how a joke or line can land, especially without a large audience to feed from. Don’t Give Up: A Cynical Tale is a game that uses humour to bridge the light and the dark in the world but does not shy away from its difficult subject matter.

Players take on the role of two protagonists through the game, albeit both in the same body. Tristan “Tris” Barona is a struggling game dev who loses his dream job and girlfriend at the same time. He moves to a new city while trying to run from his emotional turmoil and make a fresh start. During this, Subris — the personification of Tris’s unconscious mental state — is trapped in darkness. Though perspectives may shift, both characters are embarking on a journey of slaying inner demons while learning about social cues.

Having a dual narrative in an RPG can be exceedingly difficult if both wholes do not add up. This is unfortunately the case with Don’t Give Up. Tris’s storyline is the one that players will connect with most. His emotionally destructive behaviour, his inability to be vulnerable around others, and his complete lack of self-awareness are elements that people can gravitate towards. Subris’s story is often convoluted and confusing as its purpose isn’t crystal clear to the player beyond his role as a personification of Tris’s unconscious state. Unfortunately, the game’s plot lacks the balance and distinct connections needed to make the duality work. Tris’s habit of deflection via cynicism and humour doesn’t mesh with Subris’s themes of light and dark; meanwhile, there’s a lack of clarity in the narrative, and Tris’s tale completely overshadows that of Subris. 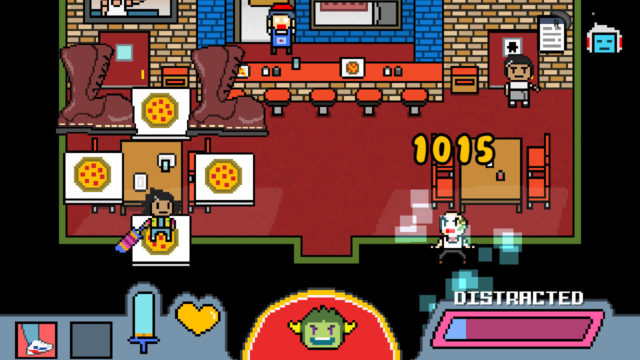 It is worth stressing that the conversations about anxiety, depression, and suicide are handled exceptionally well in Tris’s story. There are scenes that can feel triggering but are so accurate in terms of their emotional response. Tris’s story resonates now more than ever, given  the state of the world and the COVID-19 pandemic. It’s easy to lapse into cynicism when all feels lost, and Tris’s inner battle is one worth witnessing because it’s a reflection of all of us in some capacity. Perhaps because of how solid Tris’s side of the story is, it makes the shortfalls of Subris’s tale all the more visible, especially in clumsy moments. Despite those shortfalls, the writing in Don’t Give Up is solid, with genuine humour and plenty of zingers, and it’s clear how much care was put into crafting an overall message.

With minimal battles and no experience system, Don’t Give Up isn’t a typical RPG. Battles are instead plot devices that drive the story forward, and border on boring. Combat moves in real time, with Tris and Subris bouncing between four platforms. When an enemy is ready to attack, a platform will light up and the player must move their character out of harm’s way, while still attacking the enemy. The movement for this combat system does not feel natural with the analog stick but is great with the D-pad. The game is mostly too easy, until the final few battles where the game ramps up the difficulty without warning and doesn’t justify why that is the case. It’s unfortunate that the game’s battle system feels unbalanced through the bulk of the game, while a lack of consistency in encounter frequency leaves players guessing when another might rear its ugly head.

While players have the option to attack, parry, or to use a powerful move, parry is essentially useless. Attacking the enemies will fill the ultimate gauge, and once completed the player can unleash a game-changing ability that ends most battles instantly. Significant difficulties with combat came in the lead-up to the final boss fight, where there sometimes weren’t solid indicators of what the player should be doing to complete the fight. The final boss itself moves at a far quicker pace than the player input can handle, often resulting in a lot of player missteps, leading one to question whether there are issues with the game or the controller, while again feeling like prompts were missing to provide indications of what is expected from the player.

The game unfortunately has some unique glitches as well. During the final boss fight if the player hits pause the boss will carry on regardless and hit the player in the process. The game hardlocked when rolling credits, and followed that up causing further hardlocks when trying to boot up New Game+. These issues do make the game difficult to recommend until they’re ironed out and make the Switch release a smoother experience. 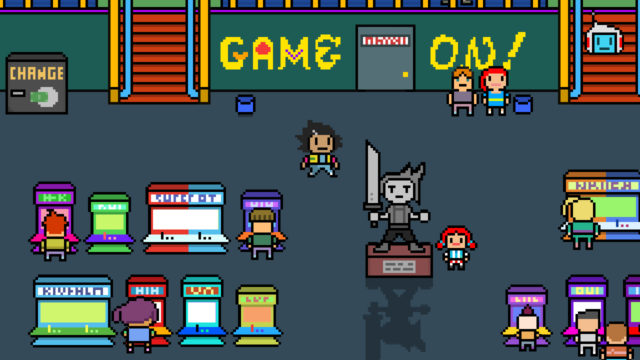 I want to be as cool as Cloud Strife…. erm, maybe I don’t.

Where Don’t Give Up shines gameplay-wise is its secondary combat system. Using the Smak Talk option only available to Tris, players can distract, persuade, or casually insult enemies. Tris can hurl harsh words, witty sizzles, or weak remarks, though which selection is which isn’t readily apparent. If the player accidentally chooses the weak option, enemies will be fired up, whereas if the harsh or sizzle is selected, the enemy will be put into a disadvantaged state, often questioning their own existence. This system is brilliant and funny, but as the game progresses, there are frustratingly fewer Smak Talk moments to engage with.

In terms of the game’s look and feel, the pixel graphics are fun and inviting. There is so much colour and movement in Don’t Give Up that it’s very pleasant to look at, and the world feels alive even with the limited number of places that can be visited. There is a lot of attention to detail in each area, such as the Game On arcade, as well as in combat where colour swords stretch to large boots smacking Tris in the face. The soundtrack is the absolute highlight of this game, as every single track does a phenomenal job of both motivating the player and conveying what is happening in the story. The marriage of music to story is perfection in this game, and at no point does the soundtrack feel stale.

Despite my complaints, I actually enjoyed my time with Don’t Give Up, and I think, long-term, Taco Pizza Cat Games has the ability to create powerful stories that people will want to connect with. The game’s subject matter is of great importance, as is the way in which it connects with the audience. If nothing else, indies like this are showing the value of telling stories rooted in mental illness with both humour and empathy. However, the experience I had with Don’t Give Up was sadly diminished by technical issues and combat that leaves a lot to be desired and ultimately isn’t fun to play. There is absolutely a good game hidden within it and damn does it have a lot of heart, but at this time the game misses its mark on the technical side, which makes it tough to fully recommend.

Tags: DON'T GIVE UP: A Cynical TaleSwitchTaco Pizza Cat Games