A Journey You Don’t Want to Take

Over the last couple of decades, a number of role playing board games have done an admirable job of filling in a niche desire among gaming enthusiasts. However, none of them made a large enough impact to catch a developer’s eye and be developed into a video game. Sting, the creators of Dokapon Journey attempt to do what few have before; create an original, entertaining video game RPG-board game hybrid.

Players begin the game choosing from various modes. The main method of play, story mode, takes our heroes through a variety of missions and quests for the king. A different mode, Gold Rush, allows the players to choose a time limit to see who can get the most gold. The players then choose their character classes, sex, and name. The player may also assign AI control to some, or all, of the players as necessary. Interestingly enough, players may switch AI control of any or all players at anytime, which helps if you have a friend who drops out of the game before it is finished.

Throughout the story mode, the king will give quests and objectives for the heroes to accomplish. Each player presses a button to stop a spinner, which allows the hero to normally move one to six spaces on his turn. This number is important because it is quite possible to overshoot one’s objective. For example, if a player is two spaces away from a town, and rolls a three, he will not be able to stop on it. This can quickly become a source of frustration. Certain consumable items allow players to move a set number of spaces. This is limited by your backpack, which can only carry eight items at a time. 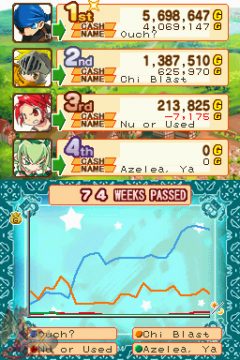 Any game with charts just HAS to be fun, right?

When a player lands on a normal space, they are usually pulled into a random encounter. The level of the attacking monster is based on the area. Generally speaking, the further away from the starting castle a player is, the stronger the enemies become. Attack order is determined by luck of the draw. Whether on defense or offense, the player must choose one of several types of moves derived from a rock-paper-scissors system. Choosing the appropriate offense or defense can make or break most battles unless a significant variance in levels between the player and his opponent exists. Since the player cannot know what option the computer (or his opponent) has chosen, success here once again falls to luck of the draw.

As opponents are defeated, players earn experience points, gaining levels and stat boosts. After a few levels, players are ready to take on low level boss mobs, which guard the towns and must be defeated in order to liberate them. Once liberated, the player assumes ownership of the town, allowing him to draw taxes from the people and upgrade the town for increased tax output. At any given time, the king usually has a favorite town that a boss monster has control of. When a player frees these favored towns, the king will give added rewards, including prizes randomly taken from other players such as their towns and money.

Occasionally, the king will give all of the players a mission. For example, the players may be charged with retrieving an artifact from a sunken temple. Since these objectives sport the best prizes upon completion, players will commonly run into each other. When opposing players land on the same space, they can fight against each other. The winner generally gets to take his choice of the loser’s possessions or a portion of his gold.

There are a variety of events, most random, that can change who is in the lead rather quickly. For example, a player may run into an elf who will force them into a game of rock-paper-scissors. Failure at this exchange means the player loses a major portion of gold. When one of these events affect gold amounts, it is almost always based on percentages, instead of a flat rate. In multiplayer, these events keep any one player from getting too comfortable with the lead, and keep the other players interested. In single player, these mechanics just cause frustration. Completing a quest from the king may lead to a reward of one quarter up to half of an opposing player’s gold. Therefore, no matter how large a lead may be, it can be cut short very quickly. 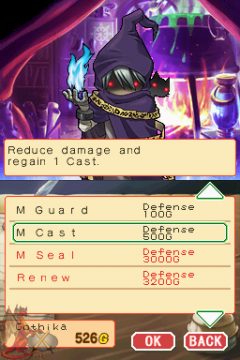 Here’s the best graphics in the whole game. Pity it only lasts while you shop.

Unfortunately, it is the pure randomness factor that will turn off many gamers. Just about everything in the game is random, including combat order, success in most battles, and staying in the lead. While experienced players can develop strategies that give them a higher probability of success, the current leader is rarely more than one or two poor random choices away from losing his position. The act of entering a dungeon is completely random as players must roll the exact number to land on the entrance. While items can help with this, a strict rule on the number of items one may carry limits their effectiveness.

The graphics in Dokapon Journey are extremely simple. The board is clearly broken down into a grid-based format. Colors are bright, but the textures are bland. In combat, the view switches from overhead to an isometric one with the occasional manga style cutscene thrown in when a proper counter attack is activated. Unfortunately, the animation is choppy. Take as a whole, this is one of the few times where an RPG’s graphics seriously detract from the overall game experience. Music and sound effects are uninspired and clichéd. Appropriate sound effects for fighting, moving, etc. are there, but the background music repeats too often and is forgettable at best.

Dokapon Journey fails to impress. Its unique premise and array of options help the game feel original, however, the degree to which random events and blind choices play dominates every aspect of the game. It makes certain aspects of the game, such as landing on a particular town or entering a dungeon, needlessly frustrating and time consuming. In multiplayer, some of this frustration is mitigated depending on what friends one is playing with. RPGs usually have a degree of randomness, and board games tend to have a much greater one. However, Dokapon takes this concept to a new level by integrating pure luck into almost every aspect of the game. The end result is a game where most defeats feel like a result of a bad roll or random event, not a bad choice on the player’s part.