Originally released back in 2012, Defender’s Quest: Valley of the Forgotten earned a great reception with its strong intertwining of tower defence and RPGs. Though a second game is on its way, Level Up Labs has given the original game a fresh lease by releasing an updated DX version and now bringing it to PlayStation 4 and Xbox One, with a PlayStation Vita version also on the way. Though the gamepad may not be the ideal way to play the game, it nonetheless retains much of what made it so well received, with some charming writing and very addictive gameplay.

Defender’s Quest begins with the banishment of Royal Librarian Azra, who is thrown into a wasteland called the Pit after she contracts a deadly plague that is ravaging the land. The plague turns its sufferers into undead Revenants, but fortunately Azra discovers that she is both immune to this effect and has the power to fight back by getting herself and her newly-found allies to straddle the lines between this world and the next.

The plot is fairly straightforward, and its twists never come as big surprises, but Defender’s Quest‘s tale nonetheless stands up thanks to high-quality writing that comes through in the often humorous interactions between the characters, especially those involving shirtless barbarian Slak. Some deeper narrative is added by Azra’s journal, which is available from the outset in the DX version and provides some useful and interesting extra flavour to proceedings, as well as yet more humour when Slak finds it and adds his own comments. The lack of padding also works in the game’s favour, letting the player get to the crux and highlight of the game: its tower defence-style battles.

Though the combat is primarily tower defence, the RPG aspects of the game blend in nicely. Azra eventually teams up with six different story characters, each with their own class, and can add to their number by recruiting more in town, with players able to customise the colours of the additional recruits. These titular Defenders are placed around a map, which channels waves of enemies from various spawn points towards Azra. Different classes of Defenders play particular roles, for example, Berserkers quickly attack any enemy within striking distance, Rangers shoot arrows at anything in a certain range, while Knights specialise against armoured enemies. Though Defenders can be withdrawn and placed elsewhere, most of the work will be done — at least on the normal difficulty — through their initial placement. 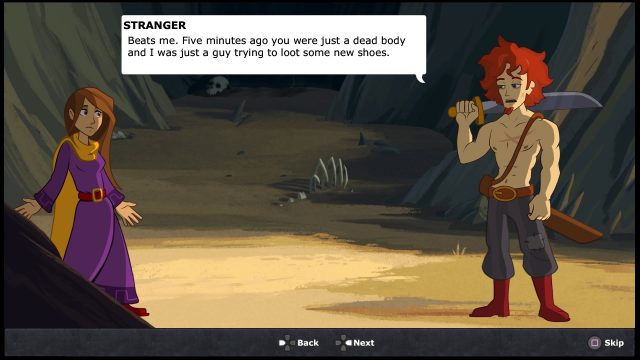 Good shoes are vital for an adventurer. Shirts less so.

The tactics and RPG elements come in through powering up these Defenders. Placing Defenders costs Psi, which is replenished by defeating enemies, and Psi can also be used to power up each Defender a maximum of four times. Each boost often provides an extra skill (assuming it has been learned) to the Defender’s automically-used arsenal, plus some attack attribute bonuses. Skills are learned and enhanced, along with other passive abilities, by spending skill points accrued after levelling up. Outside of the initial placement of Defenders, much of the tactics that come into play revolve around deciding which ones need to be upgraded when. Further intricacy is added through instructions on whom to attack, such as the strongest or most vulnerable to status effects. Players are given a heads up of which enemies are set to appear and where, and so can plan accordingly.

In addition to Defenders, Azra has her own set of skills, such as a lightning attack and powerful healing spell. These are best used as emergency measures, as they often require plenty of precious Psi points and are by no means enough to change the tide of battle by themselves. They get the most use just in case an enemy slips through and one needs to try and maintain their until-now perfect defence and the resulting gold completion star and reward. If an enemy does slip through they will do damage to Azra, and if she loses all her hit points the battle is failed. The game gives players plenty of control, allowing them to speed up, slow down, and pause time as they wish. Combat is exciting — particularly when it seems touch and go whether or not the party will be able to hold off an onrush of enemies — and requires plenty of thought. It’s incredibly satisfying to see the efforts in setting up a stalwart defense being rewarded.

The main issue that arises with the gameplay is that the gamepad is not the most suited control device for tower defense-style games, though Defender’s Quest does as good a job of adapting it as could be expected. It’s a game style that clearly benefits most from having either a mouse or touchscreen to control it. However, the control over time means that it won’t prevent players from reacting in time, it just means that doing so will take longer. Aside from this, however, Defender’s Quest does a nice job steadily introducing the various aspects of the game, such as new spells, classes and enemy types without overloading the player. 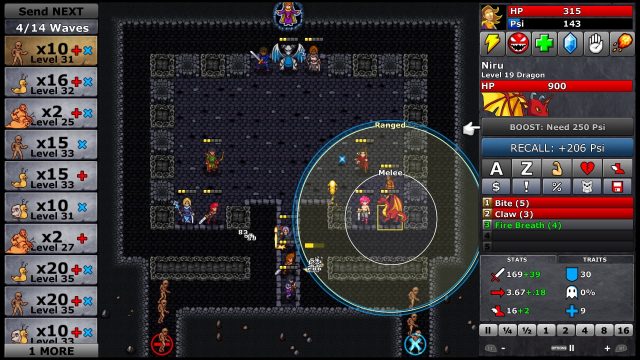 Players have a great deal of freedom when it comes to the challenge of the game. Those looking to just enjoy the story can play each map on the lowest difficulty and bump up the experience and money earned from battles at any time, while those looking for a challenge can knock the rewards down and try to beat each map on the tougher settings. Each aspect is directly up to the player, so the challenge and potential need for grinding is at their discretion. The game is a bit stingy with giving out scrap (money) at its standard setting, so unless players do lots of grinding and tweak the balance in their favour, they may only be able to afford one or two new pieces of equipment for their much larger party at the next town. The equipment system is very basic, however, with only one slot each for single-attribute weapons and armour and is one of the game’s few real weak points.

The game’s story is easily completed in under ten hours, but in addition to trying to complete maps on the tougher difficulties, extra longevity is provided in the form of a New Game+ that adds in an extra Staff Commentary to the journal as well as providing new challenge. Both the standard playthrough and New Game+ are saved in parallel, so players can always return to the initial playthrough if they wish to mop up anything left unfinished. There are also multiple endings, but these are solely provided based on performance in the final battle.

Though not likely to challenge for the title of best-looking game, the artwork and battle screens in Defender’s Quest have been updated since its initial release and provide plenty of character while being pleasing to interact with. Music is also strong, but is fairly repetitive. However, the sound effects add some nice additional substance to proceedings, giving some bonus battle cues, and the overall audio experience is never left wanting.

Defender’s Quest is a triumphant blending of RPG and tower defense and should provide plenty of entertainment for fans of both genres. Though the controls may not be ideally suited to the genre, Level Up Labs has done a nice job bringing players steadily to the game and offers an impressive level of control that will appeal to the hardcore and casual player alike. Addictive gameplay and entertaining writing makes for a great experience all around.