To Arms, We Go

A common phrase says imitation is the sincerest form of flattery. Many indie games often draw from a variety of inspirations, especially from long-standing series. Sword & Axe LLC’s Dark Deity is clearly a love letter to Nintendo’s classic Fire Emblem titles, offering an addictive gameplay loop, tons of characters and classes, and a decent amount of challenge to boot. The bones of the game are strong, but it’s often unsteady on its feet.

Dark Deity’s story begins with a war brought upon by King Varic, who desires conquest. Without any choice, the students of Brookstead Military Academy are forced into combat before completing their full training. Protagonist Irving and his companions Garrick, Maren, and Alden begin to realize that there is something more nefarious at play, as shadowy figures come searching for magical artifacts come out to play. With the world ravaged by war, a corrupted king, and necromancy afoot, it’s up to Irving and his companions to save the world and restore it to order. 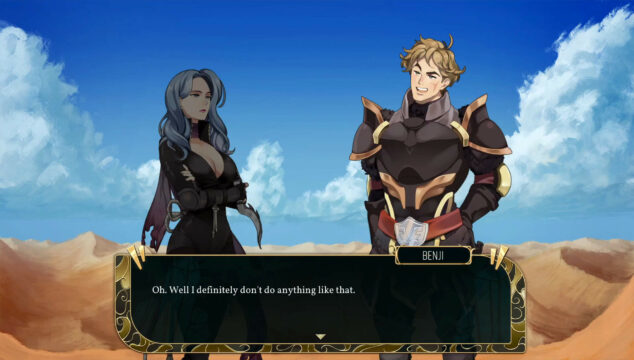 Brooke has no time for Benji’s nonsense.

There is nothing original about Dark Deity‘s story, yet the game’s cast of characters make it compelling. Each of the party members is chock full of personality and they have great banter that makes the generic story a lot less dull than it would otherwise be. It might not win any awards, but there are a lot of great quips and zingers within the dialogue that help the game’s dark storyline. In a page taken straight from Fire Emblem, units placed next to each other in combat can bond, which provides more story and character background. Most of the time this is cute, though it doesn’t offer any mechanical bonuses. With over thirty different characters to recruit, it’s impressive how much Dark Deity attempts to make them all feel cohesive to the overall narrative. While the characters and story are not particularly deep, they are fun and engaging to interact with.

However, the story is not why one plays Dark Deity — it’s the addictive strategic combat and character customization that is the true draw. Battles play out on large maps with specific objectives. Those objectives can range from slaughtering all enemies to escaping a location. As characters move around the map on their turn, they engage in one-on-one combat with a targeted foe. Positioning units based on their class type is key, as mages and archers can strike from afar, while lancers and sword-wielders need to be in close proximity. Much like Fire Emblem, the goal is complete the battles with one’s forces intact, but where Dark Deity differs is that it doesn’t punish players with the death of their characters. Defeated units are instead gravely wounded, lowering their combat capabilities, though if they have been wounded enough times they can become unusable. For strategy lovers, there is a lot to consider in every battle, and Dark Deity offers a good amount of challenge without punishing players for experimentation with class types. The game also has multiple difficulties to choose from at the start of the game. 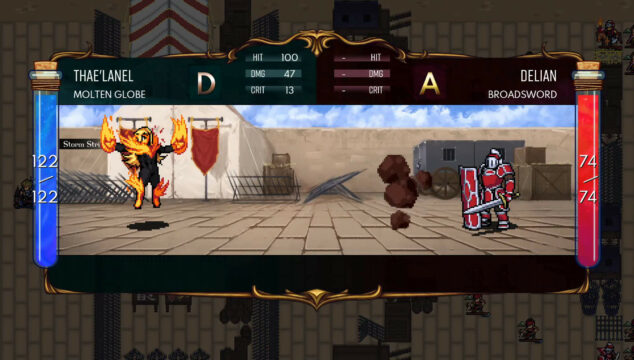 Every class has its advantages and disadvantages in match-ups and given there are over fifty choices, including those gained through promotion, there is a lot of room to mix and match player units on the field. Combat success is also affected by the type of damage and armor, so it’s important to pay attention to each match-up. Every character also comes with four different weapon types — Power, Finesse, Focus, and Balance — that affect their combat capabilities. For example, if the unit has a power-based weapon, it will do a lot of damage but move much slower along the map. This also means if one weapon type isn’t working on an enemy, players can change it during their turn to see if it’s more advantageous. Weapons can be upgraded with tier tokens, which are obtained from defeated enemies or purchased from the shop.

Dark Deity also adds another element of customization in the form of Eternal Aspects. These pieces of unique equipment offer a ton of different bonuses from increased damage or dodge to granting the ability to strike twice in one round. Some characters come with these pieces of equipment, while others can be found in chests during combat. Eternal Aspects can definitely help change the tide of a battle to the player’s favor and are a nifty addition overall. There’s nothing more satisfying than watching a unit make use of the two turns or higher critical damage to swiftly slaughter an enemy. Battles are so engaging in Dark Deity‘s battles are highly engaging, and having these additional layers of choice and customization makes combat sections addictive.

While the game’s combat and customization deserve high praise, the Nintendo Switch port of Dark Deity has an abundance of performance issues that must be addressed. The game suffers from long and frequent load times, and it’s frustrating going from a quick piece of story into multiple load screens. Loading in the maps takes a bit of extra time, and there is a noticeable slowdown when units move around the map. There are also moments of units glitching out in combat wherein they are unable to move or perform an action, while menus would occasionally mark bond events for a character that didn’t have any. 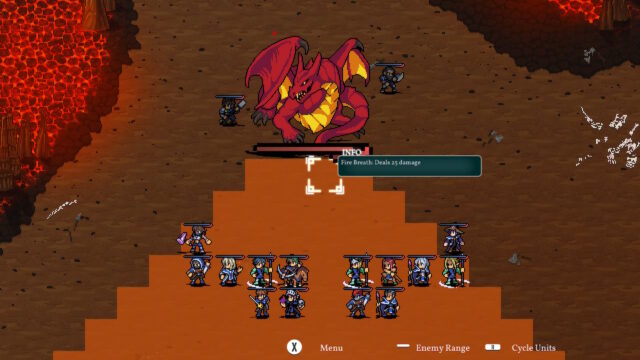 Fight me, dragon! FIGHT ME!

The menus are cumbersome, and confusing, as it’s hard to know which character portrait players are looking at when trading items or accessing bond events. There is also the choice of font. While the font is fine on a big screen, in handheld mode it can be difficult to see, especially the teeny tiny objective information. Ironing out these performance and accessibility issues would make for a significantly improved experience.

Despite the above issues, Dark Deity sports pleasant enough pixel graphics. However, many of the major villains do not get their own character models in combat and are often replaced with a generic enemy, which is a bummer. All of the enemy types look nearly indistinguishable, while the character units all have unique looks, which are very different based on their class type. There’s nothing more hilarious than tiny mage Alden becoming a Battlemage and having really beefy arms. The game’s soundtrack is lovely and simple, but nothing particularly stands out as amazing. It’s serviceable, and the tracks do a good job of capturing the feel of what is happening throughout the game’s plot. There is voice acting as well, though it’s mostly just simple phrases and when a character hits a critical attack. The voice acting is limited to simple phrases and noting when a character hits a critical attack. The performances are fine, but there are no standout ones to make it memorable.

Dark Deity feels like a love letter to Fire Emblem in so many ways, and while it does have elements that make it stand on its own, it’s not fully there yet. That being said, there’s a lot to like in Dark Deity, with an addictive gameplay loop and ensuring tons of possibilities for customization to make its gameplay shine. I was so pleasantly surprised with Dark Deity on numerous occasions and I am eager to see if Sword & Axe LLC can iron out the kinks. Any strategy fan looking for a good challenge, interesting gameplay, and fun and customizable cast of characters should find Dark Deity up their alley. Just maybe wait for a patch on the Switch in hopes that the performance issues get addressed.