Editor’s note — Shortly before publication, Cyberpunk 2077’s PlayStation 4 version was delisted from the PlayStation Store. As physical copies can be found, the game is still playable for those who have bought it digitally, and many elements covered are universal, we have elected to post our review regardless.

Cyberpunk 2077 was undoubtedly one of this year’s most anticipated titles. After its work on The Witcher series, particularly the third entry, many were excited to see what CD Projekt RED could do with the sci-fi Cyberpunk franchise. Ultimately, while there’s absolutely a very enjoyable title in Cyberpunk 2077, it simply doesn’t do anything open-world games haven’t done before. There are some excellent character-focused elements and some fine linkage of the gameplay systems, but uninspired mission design and a fairly lacklustre main questline hold it back, and that’s before getting to the major black mark: its console performance.

It feels appropriate to address the elephant in the room first and foremost. This review was played on a regular PlayStation 4, and it is staggering how inferior the performance and graphical level are compared to PC footage. How much of an issue the discrepancy is will vary between players and their setups, but the end result is that both resolution and lighting are nowhere near the level one might expect if they’ve watched the game running on PC. One needs to become used to heavy texture pop-ins, including on the UI. Graphical bugs are present as well, though exactly how prevalent they are between players appears largely up to chance.

However, the largest annoyance is the game’s disposition to crash. The review playthrough suffered from a crash every few hours, though the frequency was variable and some cases were repeated, necessitating loading an earlier save. CD Projekt RED at least implemented multiple autosaves, and it’s easy to maintain a rolling slate of manual saves, so one is unlikely to lose huge amounts of progress, but those crashes will be deal-breakers to a good percentage of players. In addition, the game will stop responding to inputs for multiple seconds in certain cases, such as when opening messages from NPCs while driving. A small number of issues have at least been addressed, such as an alteration to lighting effects that could trigger seizures, but it’s clear that much more is needed for the game to come anywhere close to matching what CD Projekt RED’s marketing promised. 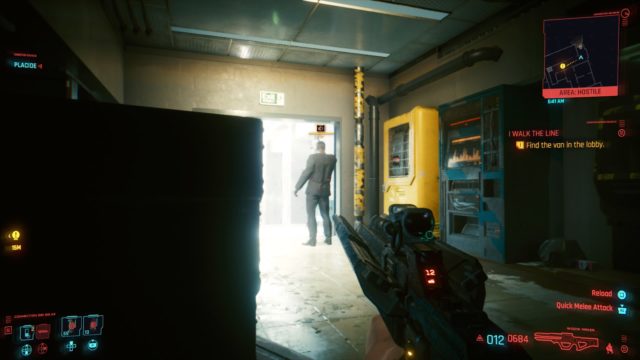 Being quiet is often hinted as the best approach, but going in all-guns-blazing is viable.

Utilising R. Talsorian Games and Mike Pondsmith’s Cyberpunk tabletop RPG setting, the game is set in an alternate universe’s year 2077 where cyberisation has become rampant and megacorporations effectively run the world. Players control a mercenary named V in the Californian metropolis Night City, selecting their appearance, gender, etc. through a broad, but not especially deep, character creator. V can take one of three backgrounds, which determines their prologue missions and unlocks various conversation options across the game, although in the end the background choice is not overly important to V’s journey. By the end of the prologue, V teams up with Jackie Welles, making a decent living running missions on behalf of the city’s fixers, but a heist sometime later leads to V’s mind being implanted with an experimental, unremovable chip containing the mind of dead terrorist Johnny Silverhand, portrayed by Keanu Reeves. As the chip attempts to overwrite V’s mind with that of Johnny’s, and after some initial direct conflict, the duo looks for a solution to the issue while Johnny also encourages V to get back at the Arasaka Corporation that killed him.

Cyberpunk 2077 makes much more use of Keanu Reeves than other RPGs have of their star power. He is a very welcome part of the game and his role of Johnny Silverhand drives much of the main plot. Johnny starts out as a complete jerk but steadily becomes more likable as the game goes on, offering V his thoughts and comments on the mainline missions, as well as a hefty number of side missions and events. He gives V a helpful foil to play off. Cyberpunk 2077′s best moments are easily those questlines specific to characters; Judy, Panam, and River in particular offer highly engaging questlines that should not be missed. CD Projekt RED’s character-focused writing generates the game’s best moments, providing relatable and emotional stories.

CD Projekt RED successfully evokes the bleak future that Night City represents, and also ably crafts a setting that is both hostile and hard not to get sucked into. Some of the quests lead into others effectively; one straightforward assassination mission ends up looking at a killer searching for redemption, but this ultimately ends up an example of Cyberpunk 2077′s unwillingness to take things as far as it could. Though the game likes to raise plenty of questions surrounding technological advancements and what they might mean for society, it will often simply drop the thread before getting into any true examination. Though some choices are pleasingly referenced or carried through to later events, the majority feel very superficial. Unfortunately, there aren’t any engaging antagonists either, though one might argue Night City itself ends up inhabiting that role, and players are left fighting or sneaking around generic gang members. The main quest is ultimately decent enough and is at its best when it includes quieter, character-driven events, but much of what is between those moments is largely formulaic, treading familiar tropes. The more personal-focused sidequests are deserving of praise and of devoting time to them, some of those quests also being required to unlock more satisfying ending options, but the other parts fail to ignite the same level of interest. 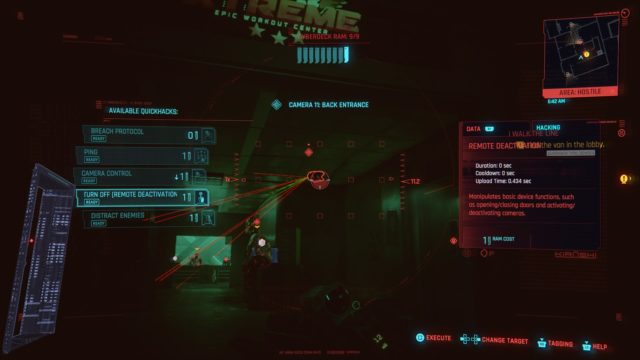 Players will get plenty of use from quickhacking, particularly when being stealthy.

Cyberpunk 2077 has plenty of gameplay systems working in tandem, and they meld together very well. Melee combat is definitely clunky, but fortunately the gunplay is highly satisfying. It plays like a solid first-person shooter, with cover and stealth mechanics playing major roles in the game. Missions are usually readily guided by the mini-map, though some warrant exploration within a small area to find a particular objective. Stealth is usually encouraged, but not required. Players can crouch around to avoid detection, sneaking up behind enemies to put them out of commission, but should beware of any cameras or others who might see them.

Quickhacking is one of Cyberpunk 2077′s most useful features, both in combat and when trying to be stealthy. It let players cause havoc with opponents or do useful things like shutting off cameras and causing a distraction. It’s highly satisfying to be able to use quickhacks and skills to move around, complete a mission, and get out without being noticed, and much the same goes for engaging in firefights, even if certain enemies’ HP-sponge nature feels a bit at odds with the rest of proceedings. The combination of its skill and combat systems is definitely one of Cyberpunk 2077′s strengths.

Character progression features a combination of traditional leveling and improving by doing. With each level up, players receive a point to spend improving one of five base attributes, as well as a point to unlock or improve perks categorised without those attributes. Additional perk points can be obtained by using skills or actions such as sneaking enough to level them up, though most perks have a minimum attribute requirement to unlock. As most missions offer alternative paths, one can readily get by with either a jack-of-all-trades build or by focusing on a particular aspect, though certain perks are obviously more universally useful than others. In addition, the game features a basic crafting system, plenty of gear, and various options to change V’s cybernetic body parts for boosts and abilities.

There are a lot of side missions, but the large majority of these ultimately amount to busywork even if some mix up the formula or lead into more interesting threads every now and then. The approach players have for the vast majority of missions — main and side — is to either go in shooting, be as sneaky as possible, or attempt the latter and have to fall back to the former when it goes wrong (or reload a save file). The set pieces and quests that offer something else are a rarity. Fortunately, the gameplay is well handled so that both fighting and sneaking around are satisfying, though the enemy AI is not particularly troubling and often quite gormless, especially when V is sneaking around. 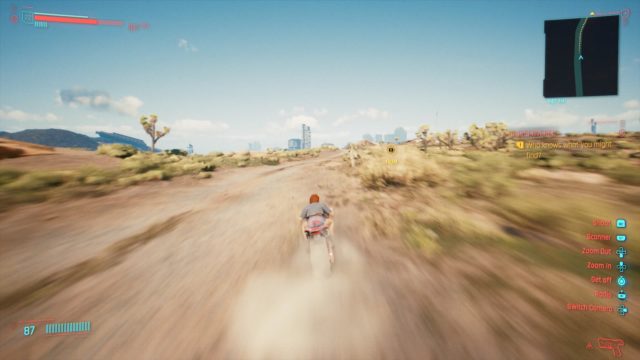 The only way to get around without crashing into something every five seconds.

Vehicles have long been a challenge for open-world games and Cyberpunk 2077 doesn’t manage them any better. There’s a pleasing array of cars available and lots of nice details in the design, but their handling is universally terrible and not helped by the texture loading, an unhelpfully-scaled mini-map, and traffic apparently designed solely to pop-up in the way. Fortunately, motorbikes are much more fun to get around with and an awful lot easier to handle, though one is not going to see any regular people on a bike in the game due to the shortcuts the game uses to generate regular denizens and traffic. Another element that could’ve been more interesting are braindances, recorded experiences where V can relive incidents and look for clues. They offer interesting opportunities to play detective, but are underused and ultimately amount to straightforward searches for clues with slightly different framing.

Despite the performance issues, the effort in crafting Night City’s layout and buildings is apparent and gives the game much of its character. However, the veneer steadily crumbles the more one spends time with it. It’s readily apparent that regular citizens and traffic are generated on the fly, quickly appearing and disappearing just as suddenly the moment they go out of frame. It’s understandable why this approach was taken, but the game makes what it’s doing too obvious. There are other strange curiosities to be found, such as the existence of plenty of ripperdocs who can change V’s major body parts, but no one who can offer a haircut.

The audio is generally praiseworthy. Voice acting on the whole is very strong, with Cherami Leigh shining brightest with her performance as the female V. The musical offerings are solid, with a variety of different genre radio stations to listen to with a mixture of great licenced and original tracks, but there are few tracks that really grab any attention. However, the radio and TV news reports and messages quickly get repetitive and there’s not very much interesting NPC chatter or incidental sound.

Cyberpunk 2077 is currently a strange one to judge and though there are definitely those out there who will still get lots of enjoyment from the game in its current state, the caveats are major, especially for anyone playing on consoles. CD Projekt RED’s management has absolutely rushed it out before it was properly ready, and at this stage it’s very much a case of buyer beware. It’s clear that lots of effort has been put into creating Night City and the well-linked major gameplay systems, but even when putting the technical issues aside, it still feels much like many open-world games that have come before.