Why Do My Alliances Keep Sucking?

2011 seems to be the year of the Diablo clone. No matter how you shake it, these games have massive appeal for great pick up-and-play experiences, and it’s this particular genre’s driving appeal. However, as more of them appear in this already-saturated market, one has to wonder if these clones have what it takes to stand apart from big bad Diablo. Crimson Alliance is Certain Affinity’s attempt at jumping into the Diablo clone fray, but does it stand on its own?

Players are transported to the world of Byzan, an empire that was once in a deep alliance with many of the area’s noble states. However, Byzan has fallen on some hard times as a primitive race called the Gulyabani has slowly begun to rise, spreading terror across the land. Players take on the roles of the mercenary brute, Gnox, a wizard with a dark past named Direwolf, and assassin extraordinaire, Moonshade, in the hopes of restoring Byzan to its previous glory.

The story of Crimson Alliance is most certainly an afterthought. There’s not a lot that drives the story forward, and players will often find themselves moving from one area to the next without ever feeling invested in the narrative. Every bit of the plot is pure exposition, and it’s hard to care about each of the characters’ stories when there’s nothing to offer in the first place. It seems as through Certain Affinity has created an interesting lore for the game’s world, but the setting is empty, making the characters feel like nothing more than blank slates surrounded by a stale atmosphere.

Since plot is obviously not the game’s forefront, the gameplay is what really drives Crimson Alliance. Each of the three character classes has its own unique skills which sets it apart. Although there are no levels to speak of, player progress is made through traversing each of the game’s many areas, collecting loot, and upgrading weapons and armor. Players will also collect unique items that will help give them the advantage over swarms of enemies. These items include deployable turrets, throwing axes, monster bait, and heart totems which can be used to heal after taking heavy damage. The key to success is defending oneself from crowds of enemies and taking advantage of everything at one’s disposal.

Each of the three characters is also equipped with an “Ultimate Power.” In order to use this exceptional ability, players must beat down groups of enemies. At the bottom of the screen, there’s a gauge that fills when enemies have been slaughtered. Once this gauge is full, players can trigger their “Ultimate Power” by pressing the Left Bumper. These attacks allow for a huge advantage over groups of enemies, but last for only a few seconds. In order to unleash these powerful attacks, players must seek out Soul Anchors that will upgrade these attacks as the game progresses. 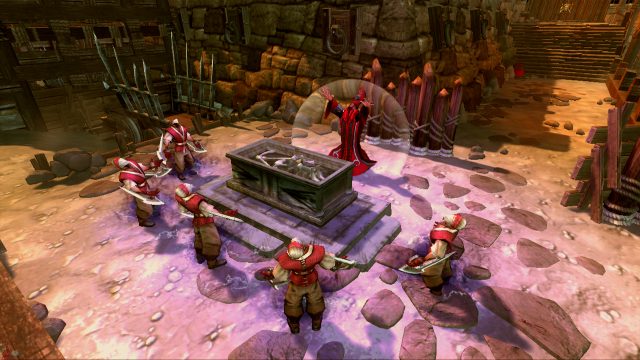 I want my own protective bubble.

In terms of combat, Crimson Alliance does have a bit more to offer than the typical Diablo clone. There’s some strategy involved when dealing with swarms of enemies, and with the game’s limited inventory, it’s crucial to make sure that every item is used when appropriate. While there are tons of items to collect, it’s better to play Crimson Alliance defensively, as recklessly attacking enemies will often result in the player’s death and having to restart at the previous check point. There’s certainly some depth involved in the game’s competent combat, but it gets old very quickly.

As previously mentioned, Crimson Alliance is a very loot-driven game. Each map is littered with secret areas that will allow characters to collect tons of gold and items. At the end of each completed map players will be scored based on how many secret areas were found and how fast the mission was completed. The more gold one has at the end of the mission, the better weapons that can be purchased before entering the next area. Crimson Alliance succeeds in this area during single player, but in multiplayer it creates a competitive spirit that is at odds with the cooperative nature of the gameplay.

Truthfully, playing Crimson Alliance as a single player experience is simply boring. Even with the amount of loot and cooperative spirit that the game showcases, the multiplayer doesn’t do enough to distinguish itself either. In fact, the multiplayer feels as if it doesn’t add much, other than a few joint puzzles and being able to access more secret areas that are labeled for a specific class. This game is certainly more enjoyable to play with a friend, but the amount of fun being provided by the multiplayer is a minimal selling point. 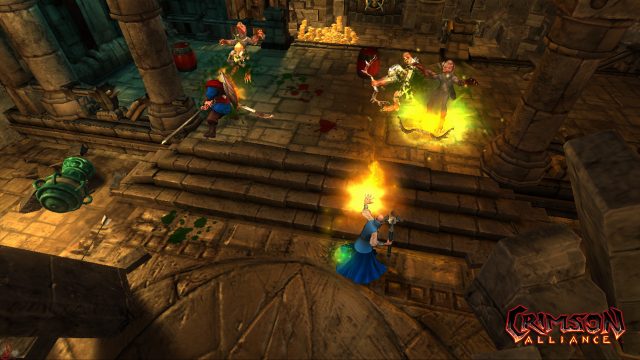 Crimson Alliance‘s visual appeal is at least an area in which it excels. The game’s art direction is very pleasant, capturing a splendid East Asian aesthetic. The cutscenes share tons of beautifully painted scenes that are quite eye-catching. The only downfall to these lovely painted scenes is how recurrent they are, as the same static shots appear repeatedly. However, the in-game graphics do not have any recycling to speak of, and are designed quite nicely. Overall, Crimson Alliance‘s visual appeal is decent, though it’s nothing to write home about.

In terms of sound, there’s some voice acting in the game, though most of it is quite mediocre. Considering the amount of exposition, it’s nice that Certain Affinity gave voice to the game’s characters, but it seems a bit out of place when so little is known about the characters, making these performances completely forgettable and pointless. The music is ambient, but like the voice acting, is unremarkable in every way, and there’s not much to speak of either.

Crimson Alliance is a fairly competent, if completely forgettable game. For $10 players will be able to unlock the game, but only have the choice of one character to choose from. For $15, players will have access to all the game’s classes. The game can easily be completed in an afternoon, but it’s simply too short to justify the price tag. Sure there are unlockable challenge maps, secret areas and tons of loot, but this has been made before, and done better. There’s just not enough content to validate the cost of admission, and once the game is completed, it’s not one that many would go back to with any sense of fondness. There are certainly some interesting ideas, and if the game’s world had been expanded more, that could have been a point in Crimson Alliance‘s favour. As it stands, Crimson Alliance, though a polished experience, lacks the content and creativity to make it a worthwhile one.