ClaDun: This Is an RPG Review

This Is a Disappointment

ClaDun: This is an RPG is a retro-styled dungeon crawler published by NIS America as a downloadable title for the PSP. The game showcases 8-bit style graphics and even the option to switch the soundtrack to 8-bit. It attempts to recreate the early days of gaming. Sadly, when it comes to gameplay, ClaDun copies all the wrong things from dungeon crawlers of yore. Featuring a long string of repetitive dungeons and enemies, ClaDun features a lot of style and not a lot of substance.

The problems with ClaDun begin immediately when the game presents players with a long cut-scene to begin. The story revolves around the mysterious land of Arcanus Cella, which is said to have a plethora of legendary treasure. A girl by the name of Pudding, who is apparently terminally ill, goes off in search of the treasure, along with her friend Souma. The game seems to present these two characters as the leads in the story, but this couldn’t be further from the case.  The story quickly loses focus on these characters, and players aren’t even required to use them beyond some introductory areas. Though the story begins with some funny moments, with these two characters breaking into the house of a surly sorceress upon arriving in Arcanus Cella, it quickly goes off the rails from there. The game will present players with story scenes as they go through the main dungeons, but there’s no structure or coherence to them. The overall story is barely explained, instead introducing new characters with poorly explained back stories that characters constantly refer to. These scenes try to be funny, but on the whole they fail to be humorous in any way. The lack of emoting of any kind really hurts the effort at comedy. With no character animations the characters just end up coming off as stiff. All the story scenes can be skipped, and players would be wise to do so.

Music is one area where ClaDun actually shines. The tunes are well composed and memorable, and there’s even an option to switch to a retro version of the soundtrack, which still sounds quite good. It features everything from rock type songs, to even a jazz type tune with blaring saxophones. The soundtrack is a lot of fun, even if the number of different tracks is small. The actual game sounds, on the other hand, are bland. Weapon and spell noises all sound similar and generic, and take away a lot of the weight that attacks should have. Since the game requires the use of the same weapon combos and spells over and over, the sounds quickly  become annoying. Enemy attacks suffer similarly, and some enemy attacks don’t even make noise. It’s a sad contrast to the music, and really hurts the overall audio presentation of the game. The developers were clearly going for a retro-style with the game sounds, but the game will remind players of the worst of the 8-bit days, not the best. 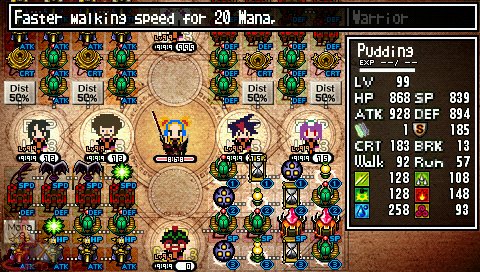 The graphics, in a similar fashion, are mixed. The character sprites successfully evoke the older days of gaming, and animate quite well. The hub town from which players enter the dungeon is nicely designed, and the different houses have a lot of character. Though the individual monsters look great, the same monsters are re-used over and over. This is broken up by the occasional boss monster, but even those get re-used. Sometimes enemy colors are palatte swapped, which for some of them means a change in element, and for others it is quite meaningless. The tilesets in the dungeons are even worse. They lack any of the creativity that the town shows, despite there being a large number of different dungeons. For the first few hours they seem to change up, going from a desert to an ice based dungeon, but beyond that the tiles are reused ad nauseam. When seeing the same kinds of tiles, monsters, and traps dungeon after dungeon,  the graphics very quickly lose any sort of retro charm they might have.

Repetition being the overarching issue ClaDun suffers from, the same can be said of the combat. There’s four weapon types in the game: hammers, swords, axes, and staves. The melee weapons are largely very similar, with staves being the only ranged type, firing slow magic projectiles. The lack of variety extends to combat itself, with much of combat boiling down to using the same three hit combo and blocking repeatedly. There are skills and spells available as well as characters level, but these mostly involve also reusing the same attack animations and just adding elemental damage. Each of the dungeons in the game features multiple floors, which serve as separate stages that can be accessed individually from the hub town. The goal is always to get to the exit. Save for a few maps that require opening chests,  and a few where one can simply run to the end, killing the monsters is the only way to open up the path out of a floor. Since there’s no way of telling this, other than by boss type monsters, it means trudging through trap-filled environments killing the majority of the monsters. Perhaps had there been other types of objectives to complete, the weakness of the battle system wouldn’t have been so magnified. 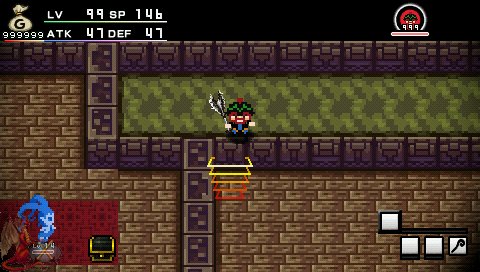 Why can’t I just smash through this wall and avoid the tedium?

The way in which players actually customize characters is interesting. One can make their own characters or use story characters, each with different classes which effect the skills they learn and the magic circles they get. The magic circle is a grid of sorts, with the chosen character at the center. One can place several other characters, depending on the grid, and these characters will soak up damage for the main character in battle. In addition, based on their mana attribute, which increases upon leveling, players will be able to place a number of artifacts in slots on the grid to increase the stats of the chosen character. Its an interesting system, especially since the secondary characters still gain xp, but can often be long and tedious to setup. The unbalanced difficulty often requires one to reconfigure magic circles to gain an edge, so players will be required to do this setup much too frequently.

In the end, ClaDun just doesn’t have much going for it beyond the retro trappings. Environments and enemies are repeated much too frequently, and the shallow combat just isn’t interesting enough to keep players going. The unbalanced difficulty often requires tedious amounts of grinding just to make any sort of progress. Even extras like a challenging random dungeon and the ability to design character sprites can’t save players from the tedium the game presents them with. There is a door in the hub town that ends the game, giving the player a bad ending and sending them to the credits. This will quickly become an irresistible option.