Chrono Cross had an intimidating legacy to uphold in the form of Chrono Trigger. Making a sequel to one of the most highly-regarded RPGs of all time raised the stakes of this game’s release, and thus its inability to equal Chrono Trigger should come as a surprise to no one. Chrono Cross is interesting in many ways and succeeds in being an RPG like no other, but Squaresoft’s attempt to introduce many new ideas is not a complete success. Even if Chrono Cross‘ combat had been addictive beyond compare, the game’s story manages the difficult trick of simultaneously being disrespectful to its predecessor and impenetrably bizarre in places.

The story of Chrono Cross starts promisingly enough, with a teenager named Serge being suddenly transported into a similar-but-different world, one where most things are the same except for the fact that he died ten years before. While coming to terms with this fact, Serge is attacked by soldiers serving Lynx, who seems to desire the capture of Serge for some purpose. Soon enough Serge gains the ability to switch between the two dimensions, where events have proceeded in different ways since his survival or death ten years prior. Aided in his struggle by a sassy girl named Kid, along with an enormous number of other characters, Serge sets out to discover why he apparently plays such a great role in the development of the world, along with the reason for Lynx’s great interest in him.

Chrono Trigger‘s cast is not particularly deep, but every character is enjoyable and entertaining, with plenty of scenes to shine during. Chrono Cross has such a huge cast that it becomes impossible to give most of them anything more than a cursory introduction, after which they will be ignored unless in the active party. Once the connections to Trigger become apparent, Cross manages to accomplish the equivalent of making a sequel to The Wizard of Oz in which Dorothy, Tin Man, Scarecrow, and the Cowardly Lion were killed by the Wicked Witch of the West, who wasn’t really melted, shortly before Ozma refuses to abdicate and is tossed into the Deadly Desert. Short of simply disrespecting its predecessor, Cross also manages to invent new plot points that were never alluded to in Trigger, and as the end nears its script fills with holes, until the whole thing sinks.

Combat in Chrono Cross is a mixed bag, but definitely manages to be interesting. When attacking an enemy, there is a choice between a weak, medium, or strong strike, with stronger attacks being less accurate and requiring more of the seven action points accumulated per turn, but being noticeably more powerful than simply launching seven weak attacks would have been. Hitting enemies also charges the element meter, without which no options other than physical attacks and defending are possible. Each spell or attack in a character’s element menu can be used once per battle. This reduces the element charge by whatever level it was placed in, requiring that every character spend a fair amount of time smacking enemies before and after every use of an element. Elements are also color-coded, with each being concurrently strong in attack and weak in defense against another. Managing elements correctly is vital for victory, but it manages to be complex without overwhelming enjoyment. 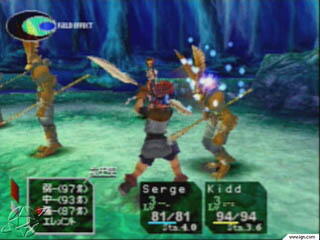 The intricacies of the battle system are many, and it often works excellently at being engrossing. Two issues make it vexing: the way enemies don’t have to play by the same rules the player does, and the drawn-out length of many later battles that will be spent building element charges. Enemies can, and do, use multiple elements in a single turn, along with having no clear rule about when their next attacks will come. The need to charge elements at the beginning of every battle also makes encounters, particularly with regular enemies, take awhile. These issues are annoying, but Chrono Cross is far more entertaining in combat than not.

Elements cannot be used until they are allocated in the menu, and it is here that the game’s inventory system earns massive demerits. With just about every boss beaten, characters gain a new slot in their element grid, to which a new ability can be assigned. Doing this manually is time-consuming and repetitive, letting the AI do the job will require the player to look through numerous pages of element levels in order to find where erroneous choices were made in order to fix them. The game does not organize the elements in any particular order, and there is no means of making it do so, requiring a lengthy search through the dozens of available elements whenever something new appears. This serves as a powerful incentive not to try new characters very often, since assigning new elements requires a substantial time investment.

Managing equipment is still a pain when the time comes to deal with just weapons and armor. These are occasionally found in treasure chests, but must mostly be forged, which depends upon having the correct ingredients along with the money to pay for the new piece of equipment. Finding the ingredients becomes a chore, especially in the later portion of the game. Affronting the senses is a truly tiny display of whether the proposed equipment acquisition will improve a character’s statistics, taking up a small percentage of the screen and showing the effect on every character simultaneously, in an effort to encourage squinting. As if all of this was not enough, the menu resets to the top whenever the player sells something, and with the enormous inventory that will be accumulated, such a thing necessitates scrolling down the list of items far too often. 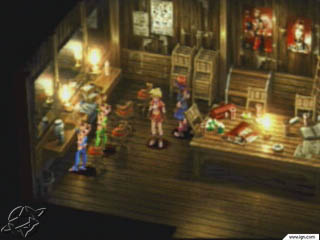 Rock stars usually trash their rooms after a concert, right? This game’s inaccuracy is sickening.

Coming near the end of the PlayStation’s life cycle, Chrono Cross shows off the system’s visual prowess. The possibility of getting lost while navigating its pretty locations is unfortunately large, but Squaresoft’s development team put plenty of effort into making those backdrops scenically stupendous. Battle graphics also look quite good, and the game avoids the tendency of many PlayStation titles to overdo gigantic spell effects with attendant player thumb-twiddling, resulting in a very satisfying visual experience.

Yasunori Mitsuda composed the majority of Chrono Trigger‘s music, and many of Cross‘s compositions are indebted to some from the earlier game, in a pleasant way that shows Mitsuda was doing his best to link the two melodically. The majority of Chrono Cross‘s score is original, and it shows off a wide variety of high-quality acoustic instrumentation that does an excellent job of making the game world engrossing and pleasant to explore. There are no real duds in the tracks, and while a few get too much exposure, the overall audio experience is fantastic.

Like its predecessor, Chrono Cross features numerous replay incentives. On one play, the incredible number of characters to recruit, several points at which the story branches, and a fair amount of optional content are respectable enticements, but the New Game+ option does what it did for Trigger, making extra endings appear throughout the game. The first time through Cross will probably require thirty to forty hours, but New Game+ extends the potential time that can be spent with the game greatly.

In some ways, Chrono Cross captures the approachability of its precursor, but not enough to make it hold the same appeal. Where Trigger had streamlined, efficient combat and menus, Cross throws out enjoyable but time-consuming battles and terrible inventory management. In the story area, Cross completely drops the ball, trampling over its predecessor and failing to fill its own holes in completely. Taken on its own, not as part of a series, Chrono Cross is entertaining but has annoying issues that drag it down at times, but that is preferable to despising it for ruining a great game’s legacy.