The Legend of Zelda may not be the first thing that comes to mind when thinking of the perfect vehicle to marry with the rhythm-based gameplay of Brace Yourself Games’ Crypt of the NecroDancer. Originally conceived as DLC for the game’s Switch port, the franchise’s catalog of celebrated musical compositions and Nintendo’s unusual interest in lending its crown jewel to an indie developer quickly turned Cadence of Hyrule into a standalone entry that somehow manages to combine the best of both worlds.

Though it is a standalone entry, Cadence of Hyrule is really more of an extension to 2015’s Crypt of the NecroDancer, which was itself ported to the Nintendo Switch just last year. In fact, it even stars the same protagonist, Cadence, who has been magically transported by the Triforce to Hyrule, a realm unknown to her, prompting her to seek a way back home. Before long, control passes from Cadence to either Link or Zelda, who are awakened by Cadence to the grim news that the king of Hyrule has been put to sleep by a man named Octavo and his Golden Lute, while Cadence herself heads off to search for a way back home. It is up to the player, playing as Link or Zelda, to locate the other members of the trio scattered across Hyrule, each of whom have access to some unique equipment and gameplay mechanics, though the option of going it alone also exists. The goal is to defeat Octavo’s four champions and gain their instruments of power, in order to open the path into Hyrule Castle and reawaken the king.

The game sticks to its roguelike roots by generating a completely randomized map for each playthrough. Locations of dungeons, items, shops, and secrets in the ten-by-ten overworld map are different each time one plays, though players can also enter a specific seed via the start menu. Another deviation from classic Zelda gameplay is that all rupees and many items are irrevocably lost upon death, though key items and diamonds — a special currency awarded for clearing all enemies on a screen and used to purchase certain treasures — are persistent. Dungeons, however, also change up their layouts when the player dies, with the exception of their hub screens that branch off to various dungeon floors. 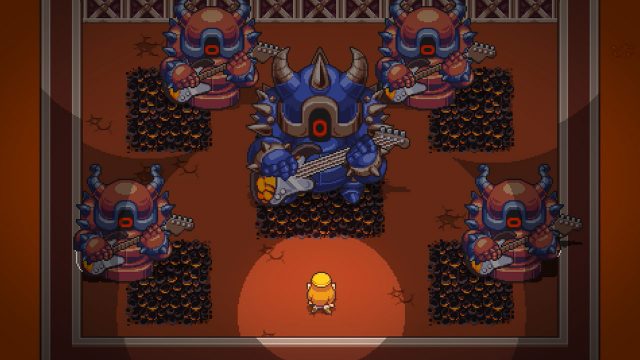 It’s your job to come out on top in this battle of the bands.

Zelda stalwarts will recognize most of Cadence of Hyrule’s tools, or identify places where they’re needed. Walking into a cavern or along the beach, one frequently comes across hard-to-reach items or impassable gaps, and thoughts of “if only I had a hookshot” or “a bow would be useful here” abound. This iteration of Hyrule is particularly reminiscent of A Link to the Past, featuring Kakariko Village, Lake Hylia, the Great Fairy’s fountain, Link’s cottage, and, of course, Hyrule Castle. Familiar game mechanics are present and accounted for, such as collecting four heart pieces to increase health, or being awarded a full heart after each vanquished boss. For the most part, enemies are familiar, including some recent baddies like Breath of the Wild’s Lynels, though some original designs appear as well.

Of course, the meat and potatoes of Cadence of Hyrule comes not from its nostalgic trimmings, but from its rhythm-based gameplay. Players coming off of Crypt of the NecroDancer will slip right into Cadence like a well-worn shoe; all others will likely have to deal with a rather steep learning curve as soon as the game begins. Everything in the game revolves around inputting commands according to the rhythm dictated by the music, from movement to combat, and even item usage. Pushing a button during the spaces in-between beats causes the action to fail, sometimes with disastrous results. Trying to rush away from danger too quickly will actually cause the character to remain locked in place for longer; an ill-timed button release can cause the bow or hookshot to misfire. Thankfully, all of the game’s music features steady rhythms that are quick to grow accustomed to; the challenge lies in training one’s brain to act and think ahead in staggered movements.

Enemies also adhere to the beat-based timing system, only moving or acting according to the rhythm. In addition, each type of enemy has a unique movement pattern that must be taken into account to combat them effectively. For example, Tektites jump diagonally every third beat, while the Lizalfos waits unmoving, only charging in a straight line if the player moves into his path. But there’s quite a bit of variety to contend with and master, such as enemies who have area attacks, throw or shoot projectiles, or hide underground until the player moves up close. Bosses are especially well designed to provide a challenge and may require several attempts to bring down. 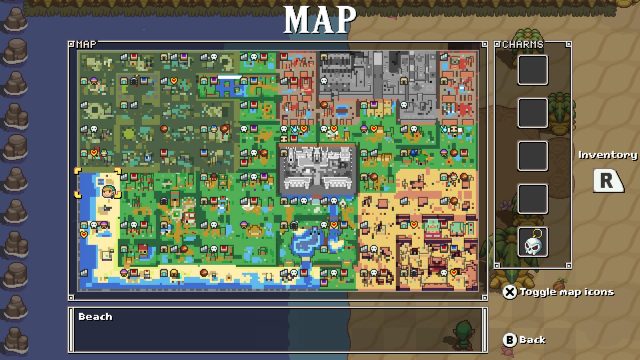 There’s no telling where Hyrule hides its secrets each time a new game is started.

Once players have acclimated to following the music’s rhythm, Cadence of Hyrule feels largely like the classic Zelda it takes its inspiration from, and scratches that itch surprisingly well. Like the map layout, the top-down presentation appears to be lifted straight from A Link to the Past. Discovering a classic tool in a subterranean treasure chest never gets old, and almost every screen hides some sort of secret. The game is, however, a bit light on puzzles, padded out instead by temporary gear and spell scrolls that some players will simply opt to bypass. This is especially felt in dungeons, which, for once, do not revolve around finding the dungeon item, then using said item to complete the dungeon. Rather, all dungeon challenges revolve around combat and tools, like the Cane of Somaria that creates pushable blocks out of thin air, are merely useful in traversing the overworld. With only four champions and a final boss battle, and of course the random nature of roguelikes, emphasis is on replayability rather than an epic quest.

In a game like this, it’s imperative that the soundtrack kills. On that front, Cadence of Hyrule succeeds, with remixes of many well-known tracks from throughout the franchise’s storied history. Each district of Hyrule, dungeon, and boss has its own distinct theme, often an updated version of a series classic reworked to incorporate that toe-tapping rhythm so important to the gameplay. There are also alternate iterations of almost every area to reflect the calmer moments when all enemies have been eliminated from the screen, making the steady rhythm no longer important. There are even a handful of puzzles found throughout the world that require the player to recreate an iconic song section by touching musical notes in the environment; as a fan, it’s a great touch to be able to actually create these snippets of Zelda music. Though some of the game’s musical tracks are less memorable than others, there are quite a few that will lodge themselves permanently in players’ memories for days on end afterwards. 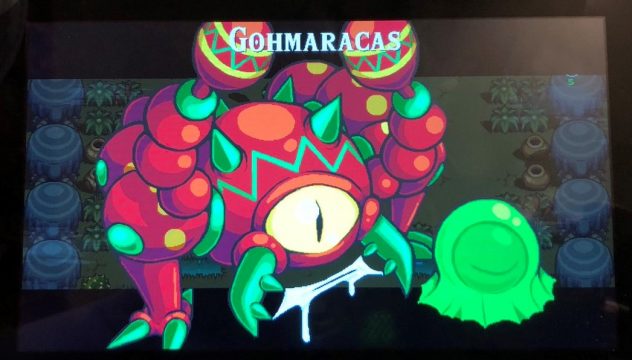 With all that said, the developers have integrated some optional modes that provide all-new challenges, and even cater to those players without a rhythm bone in their bodies. Fixed-beat mode allows a full playthrough of the game without the need to match the musical beat, save for one in-game puzzle. Instead, the game plays out like a more traditional roguelike, with player movement dictating the speed of gameplay. Each move the player makes is essentially one “beat” and allows enemies to only move or act when the player does. This mode allows for much more thinking time to avoid and anticipate enemy movements, but unfortunately trivializes certain boss fights that are designed to take advantage of a fast-beat rhythm. On the other end of the spectrum, permadeath mode tasks players with completing the entire game without dying. A two-player cooperative mode is also included.

As far as The Legend of Zelda franchise is concerned, Cadence of Hyrule is a definite spin-off, and it has no designs to be anything but. However, the game is far more than just Crypt of the NecroDancer with a Zelda skin slapped on top. The addictive feel of classic Zelda is here in spades, just executed a little differently. To prepare for this review, I cleared normal mode, then started a new game to just try out the additional modes. What was meant as nothing more than a quick foray to test out all available options quickly turned into a second full playthrough. The music, the enemies, the world — it all feels unmistakably Zelda, even if Link now has a bit of added pep in his step.