Introduced twenty years ago, Paper Mario captured an aesthetic and irreverence not previously found in RPGs, but the series has recently stumbled by stripping away the RPG elements that made its merging of gameplay and graphics feel unique.  As is so frequently the case in modern times, an indie developer has swooped in to fill the void left behind by the more mainstream title.  Bug Fables: The Everlasting Sapling takes the general premise of a paper-style title and builds their own unique experience.

Getting the obvious out of the way, Bug Fables at its core looks, sounds, and plays like Paper Mario.  When an indie title pays homage to a more well-known brand, the smaller game often doesn’t quite measure up, and yet Bug Fables manages to bring both solid graphics and memorable music that feel right at home on a Nintendo console, and even incorporates an achievement system, something usually left behind when a game makes a leap from PC to Switch.  Early in the game a musician is unlocked who can play any of Bug Fables’ excellent music, and players may find themselves more than once jamming to her repertoire of tunes.  The use of the graphical aesthetic isn’t limited to paper, but branches out into a variety of materials natural and man-made.  While exploring all the nooks and crannies of a bug-filled world, a myriad of tunes await, and the most often heard combat sound effects are on point.  Players can expect to spend at least 30 hours chasing a variety of MacGuffins through the lands of various bug tribes, while making friends and stomping enemies along the way. 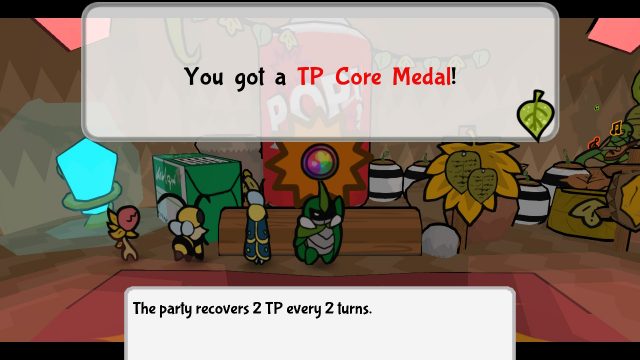 Quests encourage the player to explore the world for unique rewards.

Bugaria is a land filled with bug life of all wings and walks, where insects that have achieved sentience live in uneasy harmony.  Long ago, the technologically superior roaches disappeared without a trace quite suddenly, and as time has progressed their existence and mechanical prowess have slipped into legend.  In order to recapture lost artifacts, the Ant Queen has encouraged teams of explorers to go out and discover their whereabouts.  While Kabbu, Leif, and Violet (known as Vi) didn’t intend to start out as a team, their journey together creates an unflinching bond. The character interactions are one of many strong pieces in Bug Fables with plenty of chuckle-worthy moments, with a really strong ending that leaves players desiring just a little more, which they thankfully get in a short epilogue, just to wrap up the last few threads.

The game’s myriad sidequests also do much to flesh out its lore, including fetching needed items, retrieving lost bugs, fighting challenging enemies, or a combination of such tasks.  However, the game doesn’t always give the necessary information required for sidequests to be completed, with many requiring somewhat obscure logical leaps.  However, as most sidequests provide rewards that cannot be obtained any other way, they’re still worth pursuing.  Tracking ongoing quests, current equipment, and all the information a player needs is easily done via simple, well-designed menus.

In terms of combat, Bug Fables takes the core of Paper Mario combat and builds upon it to create a system that evokes the feeling of the source material with ample improvement.  Vi is equipped with a tool known as the Beemerang, Leif wields chilling ice magic, and Kabbu uses his horn and armoured body to bash down enemies.  With a three-person party, how combat will function is dictated both by both individual character position as well as the party’s equipped medals.  Before any character attacks, the party order can be shuffled; the character in front is given an additional attack bonus, with the trade-off being this spot is the most likely to be targeted by enemy attacks.  Combat is dynamic, with each character’s basic attacks as well as special moves dealing bonus damage by pressing a button combination at the proper time or in the proper order.  The party can also defend incoming attacks by using the defend commands, either reducing or eliminating most damage.  If a character loses all their HP, they faint, but will return to 1 HP when the combat encounter is completed.  When all characters lose their HP, it’s game over.  Special moves are learned by leveling up or by progressing in the game’s story. 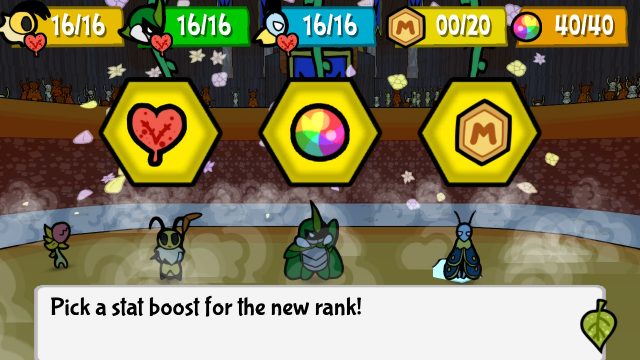 Special attacks are powered by a pooled resource, TP.  Each costs at least 2 TP to activate, and includes defensive moves such as commanding enemies to attack a certain character or providing stat buffs, and offensive moves such as dishing out extra damage or applying a status effect.  Players will need to decide the right time to apply these effects, as each has advantages and disadvantages: Poison doles out damage at the end of each turn but cannot finish off an enemy; Numb prevents anyone affected by it from moving but increases defence of whomever is shocked; Sleep prevents the affected from taking any action while healing 2 HP per turn;  Frozen prevents the user from acting and increases the damage they take by one, but immediately breaks after being attacked.  Some enemies can also inflict Burns, which act like Poison.  Later in the game, characters can unlock a pet plant named Chompie, which does a base two damage, and can be equipped with ribbons to add additional status effect attacks to its repertoire.  Learning when and how to apply status effects is crucial to taking out tougher enemies in the last two chapters of the main story.

This is where medals largely come into play.  Medals are collected in a variety of ways — purchased from vendors, received as quest rewards, or discovered by solving puzzles — and how many can be equipped depends upon the player’s choices.  Each time the party levels up, players must choose one of three options: increasing all party members’ HP by one, increasing TP by three, or increasing MP (medal points) by three.  Medals can be equipped to individual party members, such as one to increase attack by sacrificing defence, while other medals such as one that prevents enemies from getting a first strike are equipped to the party as a whole.  These medals can drastically change how a party functions — for example, one option would be to stack boosts and status effects on Vi while having Leif buff her and Kabbu taunt to ensure she isn’t attacked even while in the front row.  However, there’s no strict wrong way to build a party’s medal composition, and the player is free to create any combination desired.

Outside of combat, players will need to strap on their exploration shoes and get ready for plenty of puzzle-platforming.  Most of the exploration in the game relies on each character’s abilities, which unlock as the game progresses.  Vi’s Beemerang can activate many different cranks and switches, so it’s up to her to ensure bridges are raised or lowered and far-away switches are struck.  Leif’s ice magic can create ice blocks or form a protective bubble around the party, allowing the trio to traverse dangerous electrified platforms or get across spiky expanses.  Kabbu’s digging prowess allows the party to burrow under obstacles or knock them down to create a new path forward.  While many of these platforming sections can be a little vexing, the game is generally fairly forgiving in terms of players messing up, and falling into one of its many pitfalls will place the party on the most recently reached safe platform. 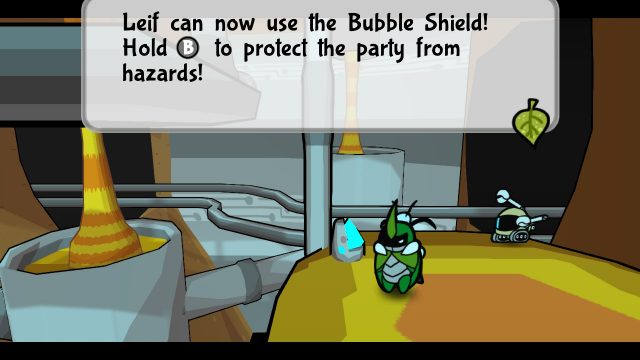 One small issue the game has is presuming players can extrapolate moves not directly taught by a tutorial; for example, Vi’s Beemerang is critical for hitting distant switches and picking up distant objects, but the game never expressly teaches players it can be used to hit switches behind her on a delay, even though this move is necessary beginning midway through the main story.  The game also lacks much-needed maps; while it offers a general overworld map, there are no individual zone maps, which would be helpful.

If the review hasn’t stated this point over and over by now, let it be clear — Bug Fables: The Everlasting Sapling does an excellent job capturing the Paper Mario spirit while still being its own game and having its own identity, and the journey onto the Switch is essentially flawless.  Though some of the platforming sections can be a little frustrating at times, the effort is all worth it to indulge in the fast-paced, well written tale of a trio of bugs.