Six Sides Are All That’s Needed

Many years have passed since Heroes of Might & Magic III consumed uncounted hours of my time, and little in the hexagonal combat genre has lived up to those memories.  Enter a new contender for those fond times in Braveland Trilogy.  Birthed as a mobile title and later brought to PC, the game has now made the trek across a map scattered with enemy encounters to arrive on the Nintendo Switch and is an excellent introduction to the hexagonal grid combat genre.  Included are all three titles in the series: the original Braveland game, Braveland Wizard, and Braveland Pirate.  With cutesy graphics, robust combat, and increasingly improving stories and quality of life improvements as each title progresses, Braveland Trilogy stands out as a living example of how growth within a genre can lead to really great games.

For veterans of Heroes of Might & Magic and games like them, Braveland Trilogy improves on the hexagonal grid combat genre in ways that titles like modern King’s Bounty games still haven’t.  By decreasing the combat zone to at maximum eight cells long and seven cells high, making a significantly more compact field to battle in, as well as drastically reducing penalties on ranged units, the speed of combat encounters is decidedly increased.  As each game’s titular character, players direct their party of up to five different kinds of units to charge into the fray and beat up the bad guys, with a different twist to the basic formula in each game — in Braveland, players take on the role of a common man rising to the challenge of becoming a commander; Wizard requires donning the role of a slightly hapless mage who just really, really needs to get a book back; while in Pirate, players take to the battlefield itself as an accidental captain searching for booty. 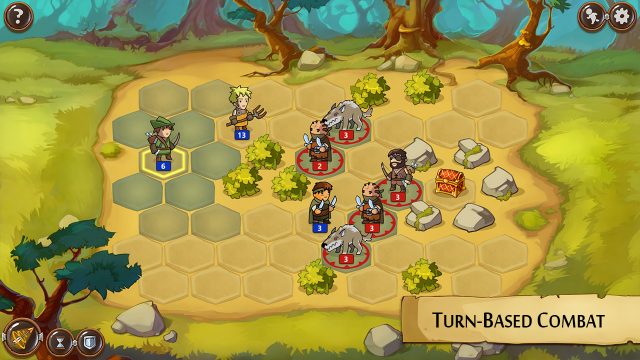 Each game in the trilogy boasts a variety of units, with some parallels across each hero’s specific units.  Braveland players will mostly control humans aggrieved by recent bandit attacks, amassing troops of farmers, healers, and knights; Wizard, set in the snowy north, gives the heroine control of units like monks, treants, and different magic-casting classes; Pirate, set on multiple lawless islands, attracts unscrupulous fellows like cannoneers, cooks, and cabin boys.  Each unit type has their own way of attacking and special abilities; for example, a cook can whip up fresh meals during combat, restoring unit health, while magic classes can throw ranged spells across the field, staying safe from enemy melee attacks.  Each allied unit also make their appearance as enemies in other games, along with units that cannot be recruited, including orcs and goblins of all stripes, crazy magic casters intent on burning the world down, and a variety of almost-too-cute-to-be-spooky undead.  Each unit costs gold to recruit, which is acquired by progressing through the story and completing each stop along the quest line.  In both Wizard and Pirate, optional repeatable encounters have been added, relieving the excessive pressure on scant gold the first Braveland had.  While the games’ difficulty can be adjusted, what is slightly puzzling is the inversion of the usual difficulty curve — while Braveland becomes progressively harder as the game continues, Wizard and Pirate become progressively easier, with a particularly challenging beginning to the Wizard story.

Along the way through each adventure, the respective heroes will level up viaski their experiences in beating up countless foes.  Braveland starts out fairly simple: the higher level the hero is and the more story that’s been completed, the more units he can recruit and the more power he has over his mysterious amulet, amassing more skills to unleash during combat.  Wizard adds additional depth with skill trees based on the magic the heroine unlocks as she progresses from cold tundra to fiery plains, mostly buffing the heroine and her units.  Pirate merges the previous two systems together — skill trees not only provide innate bonuses, but also add skills and spells to use during combat.  Choose carefully: there are more talents to choose from than skill points that will be gained in most runs.  This variety makes each hero feel very different from each other, and is one of the strongest parts of the Braveland Trilogy.

Units aren’t the only thing heroes can spend their excess gold on.  Each hero can equip four pieces of gear, including a weapon, accesssory, footwear, and miscellaneous item.  These can not only be purchased, but discovered by completing side quests, choosing one path over the other in the story, or won from key story encounters.  Players will often find switching their various pieces of equipment can provide just the bonus needed to take down a challenging foe.  As with the variety of bonuses found on gear, there’s no single right piece to wear; this customization can mean every player’s run will feel a little different. 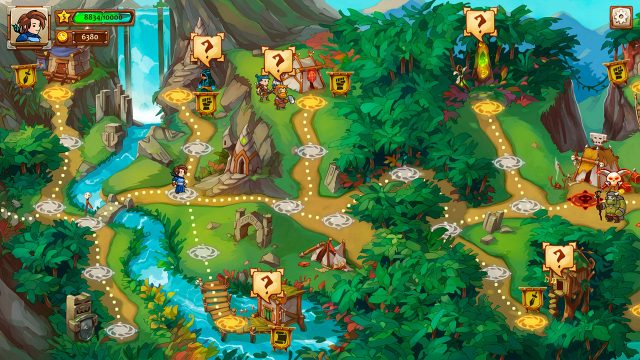 Maps filled with story to explore, units to recruit and items to purchase

Each game also boasts their own unique stories, with increasing depth as the player moves from title to title.  Braveland‘s tale is a simple one: find the bandits who raided the hero’s village…and explore the secret behind their motivation.  Wizard‘s story again has a simple beginning: get back a stolen book, but the plot behind why the book was stolen will change the life of magic-casters forever.  Pirate has the strongest narrative about a sailor who can’t give up on the idea of finding the ultimate pirate treasure, despite what it’s cost him in the past and what it might cost him in the future.  Each has its peaks and valleys, but Pirate in particular shines from start to end.

In terms of visuals, the Braveland Trilogy has a consistent, cute and colourful look that makes it stand out in a sea of indie titles.  Each unit has their own animations that make them feel alive in a world full of life.  The music on the other hand doesn’t stand out.  It works within the game, but doesn’t stay in the memory beyond that.

Braveland Trilogy is ultimately a game that is sunk and buoyed by its earlier rough edges and eventual success.  While the original Braveland is short and mediocre, the second game Braveland Wizard shows great promise and improves on nearly everything, while the third game Braveland Pirate shines with personality, sparkles with witty dialogue and shows great growth, finally fulfilling the potential glimpsed in the original game.  Providing players can bear through the original title, Braveland Trilogy is an entertaining romp through the hexagonal combat made popular in classic Heroes of Might & Magic games.