Released back in 2009, Borderlands was the first original title from Gearbox Software, but has now spawned a sizable franchise that shows no sign of stopping. Certain elements have apparently been improved and tweaked in more recent installments, but the original game is no slouch in terms of providing an engrossing experience. It leans far more toward the action side of things, providing little narrative along the way, but the action it offers was enough to keep me going through fifty-five hours.

Borderlands begins with a quick scene of the four character types being dumped out of a bus on the alien world of Pandora. The player picks one of them, and then has to go through an opening section that is strictly guided by the developers. It takes somewhere around an hour to progress through all the necessary steps to this glorified tutorial, and once it is done the player still has to reach level five in order to start down the game’s skill tree. While far from the worst tutorial sequence ever seen in a game, this is still a poor introduction to what Borderlands offers.

Once the tutorial section is open, the player is free to run around Pandora undertaking a variety of missions. Plenty of hostile natives will get in the way, and taking them down is done via first-person shooter methodology of pumping munitions into the opposition. As an FPS Borderlands handles very well, with effective controls and a variety of scenarios to practice killing off the bloodthirsty hordes. These enemies aren’t very bright, and their AI patterns are easy enough to predict, but their persistence will often suffice to keep players on their toes.

RPG mechanics pop up in numerous areas, such as experience that increases character level. The level has several important effects, being a major factor in how much damage characters deal and receive to the point where trying to tackle an enemy many levels higher is nearly impossible. The weapons picked up also come with individual levels that must be equal to or lower than the player’s to be used. Three elemental affinities are present that make a massive difference in combat, as well as an enormous variety of modifications to shields and the effect of grenades. While these things do not make Borderlands into a title that will appeal to anyone repelled by FPS mechanics, they certainly make the experience reliant on more than just skill. 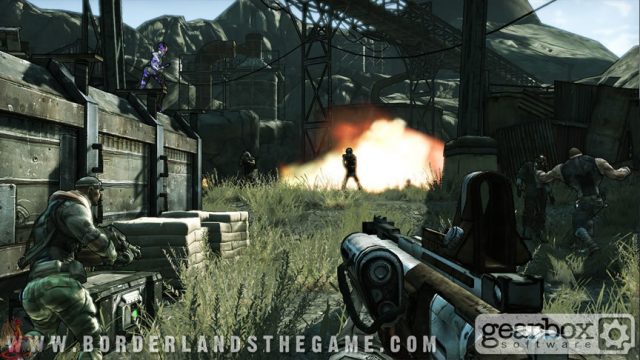 Enemies are really good at surviving mere explosions, so aim that gun at the head to make sure they stop moving.

The vast majority of missions are optional, and undertaking everything available will send the player around the large area maps that comprise Pandora. Gearbox did a fine job of making each location distinct, along with delivering a pretty good variety of enemies to get in the way. The missions themselves encompass a number of potential activities, though almost all of them will eventually involve angry locals attempting to kill the player. Many maps make a car available for faster transit, and running over foes with either end is a continually satisfying activity.

Missions are often bothersome though, since the game is inconsistent with regard to their indicators. Some tasks have the precise spot that must be visited visible on the map, while others give a vague spot around which the player must thoroughly search to complete the job. Turning in completed objectives is also a predicament, one that usually requires the player to go back to wherever the mission was assigned, which is frequently a long distance from the completion zone. Once fast transit between regions is unlocked this becomes less of an issue, but these stations are not always liberally placed around the landscape.

Enemies hit with varying strength, but an unlucky grenade or rocket at the player’s feet will overwhelm even the strongest. Should the protagonist fall, Borderlands then roots the character to the spot where life was drained and gives around fifteen seconds to kill an enemy, which will immediately revitalize the player. Death is not a tremendous hindrance though, as the player will be reconstituted at the last save point minus something like eight percent of the current cash. There are many points at which enemies can take the player by surprise, and this mechanic keeps frustration at a cheap death from becoming overwhelming.

Narrative is not the reason to play this title, though the NPCs are quite entertaining. A woman will periodically send messages to the protagonist about finding the Vault on Pandora, and eventually circumstances lead up to unlocking it. No tremendous revelations are ever disclosed, and the core plot takes up less than ten minutes of the adventure. Pandora’s NPCs are an entertaining lot though, and the text descriptions of missions tends to contain silly references that are worth a smile. 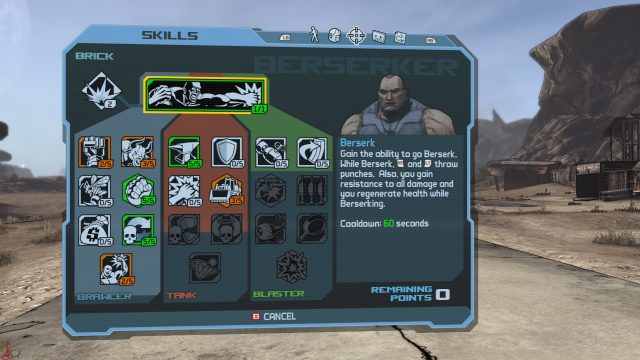 Brick’s fists are supposedly as strong as any gun. Getting close to him is not generally recommended.

The Game of the Year version of Borderlands comes with its DLC packs, which contain ample content that is worth experiencing. A zombie-infested swamp is a fun change of pace, and a freeway-packed desert region offers a chance to feel three new vehicles, while an arena with very long bouts is at least an interesting challenge with entertaining commentary from its announcer. Most of the DLC is available before completing the main game, but a scenario involving killer Claptrap robots can only be accessed after seeing the main credits. The only unpleasant issue with the DLC is that the new enemies and vehicles it presents never appear in the central product, but are great to experience on their own.

At first the visuals, which are made with an appealing cel-shaded style, do a good job of keeping player interest. Gearbox included too many brown and gray areas though, making things start to look too similar, especially when some missions demand traipsing over the same ground multiple times. The music is mostly atmospheric and ambient, with battle tunes appropriately elevating the excitement. The voices heard throughout are well done, but a few more quotes for the enemies would have been a good way to keep players from hearing “Come on little one, time to die!” over 500 times as the game progresses.

The last time I played anything with FPS mechanics, it was the end of 2004 and Halo 2 was a huge hit in the dorm. Borderlands confirmed what I knew once upon a time, that I actually have a great time with certain FPS titles. This one has an enormous pile of loot to obtain and a ton of content to hold interest, and even after all the time I spent plenty more achievements await should I boot it up on Steam again. I didn’t even spend any time with multiplayer, which apparently makes it even more addictive.